Broadcast at the odd hour of nine this evening, CDG’s first IG Live here was hosted by former radio DJ Rosalyn “Rozz” Lee, who chirpily promised “a great 30 minutes”. Was it? 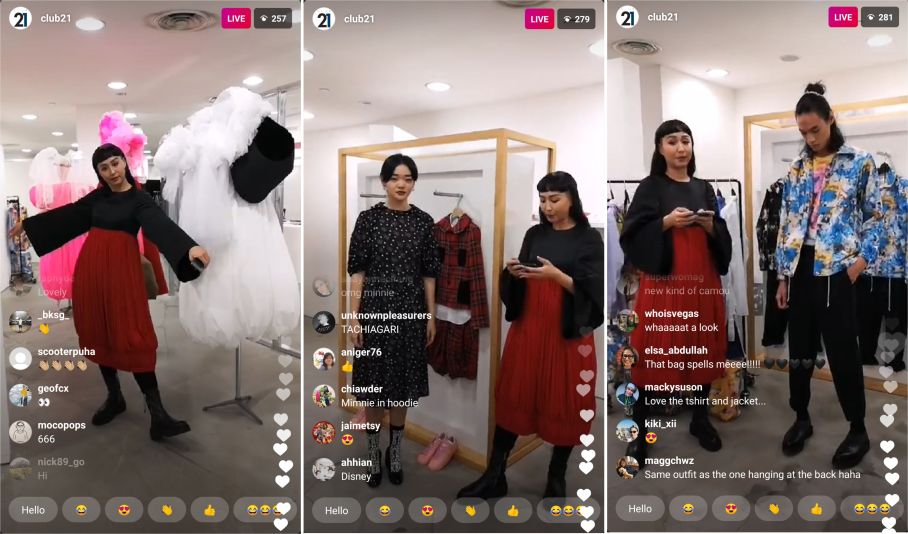 It is hard to imagine Comme des Garçcons taking to Instagram Live, just as it is impossible to frame Rei Kawakubo within a TicTok screen. Yet, CDG did go onto the social media video platform via Club 21’s IG page. The Japanese brand, despite finally joining IG (in September 2015), avoids using branded hashtags or posting IG Stories. So, it aroused our curiosity when it was announced only two days ago via Club 21, that CDG would be conducting an “IG Live preview” of the their new collection, and that viewers get to win a pair of Comme des Garçcons X Vans Graffiti sneakers. The giveaways (including another ten pair of socks) were a surprise to us since we do not associate the brand with D&D-style lucky draws.

It was then revealed that the host of Weird Food Diaries, Rosalind “Rozz” Lee, would be presenting the event. That, to us, is an odd choice. Ms Lee is known for her high spirits and exuberance, and opinions that can be best described as strong. CDG is a lot more austere and serious, and admittedly, just as unwavering. But Ms Lee’s personal style tends to veer towards the conventional, tethered to a tad of sexiness. The red and black dress that was picked for her, which she said she “really, really love” (and, in the end, enthused, “99% I am going to buy”), looked frumpy on her. Perhaps we’re used to seeing Ms Lee in something sleeker and definitely body-skimming.

Despite the potential pull of the live stream, which was Club 21’s very first, the simple and straightforward presentation drew a high of 349 views at its peak, and slipped to 266 when it was about to end. This was surprising to us as Club 21 has 53.8K followers and Ms Lee (#heyrozz) 109K. It is not clear what the target was, but the presenter did say that the show would begin when they hit 200. This might be considered an encouraging figure when most Club 21 posts garner 2-digit likes.

The show, filmed at the CDG Hilton Shopping Gallery store, was spared of conceptual strength. Sure, it looked spontaneous and user-generated—typically IG, but Ms Lee might have gained from a script or a rehearsal. At times, she did not appear to know her way around in what is a very small store. She kept relying on her smartphone to prompt her with what to say next. As she guided the viewer into the corner that houses CDG Girl, she called the space an “enclave”. Throughout her intro of the clothes, her description was that of a neophyte—light on fashion-speak, and peppered with “pretty dope” for almost every garment she showed.

Additionally, we did not quite understand why Ms Lee was told to announce the price of what the models—a male and a female—wore. And this covered every piece of the look on show. As one CDG regular told us, “customers who spend above S$1,000, would already know roughly how much those garments would cost.” We are aware that this was a selling exercise, but the inclusion of prices at the end of each intro of the pieces sadly gave what are designer clothes a pasar malam vibe.

Comme des Garçons usually launch their seasonal collections in the store with an intimate party, mostly attended by the more hardcore of fans. Given that social distancing is still strictly in place, it is understandable that an in-store event was not possible. With IG Live, CDG was pointing to the adoptable direction for other Club 21 brands, but, we were not sure who the target audience of this show really were. There was nothing in the presentation that might interest the die-hards, who were already invited to the store for the reveal tomorrow. For the newbies, Ms Lee who, like a keen-to-belong mom, happily described a shirt as “super street”, might just be the right host. And an eager shopper.