The house of the interlocking Cs shared a video of the latest haute couture collection on its website. Need Chanel be this frugal?

Put the models in front of a camera and let her do her own thing. And the rest, post-production will take care of it. For all the money Chanel had spent in the past, creating those amazing sets in the Grand Palais, it is rather shocking that, for its haute couture presentation, the brand has decided to do it easy—really easy… and plain. At one time, Chanel could afford to hire the best set builders and decorators, but now they can’t even engage a scene painter or a CGI designer. Before we’re reminded, they did raise the prices of their handbags.

We understand that times have unimaginably changed and that in the lead up to this season, it was not easy to put together an haute couture collection that would culminate in a show. But if there is “creativity in a time of crisis”, as Vogue said encouragingly on its June/July cover, Chanel is not expressing it, although on its website it declares “limitless creativity and sophistication”. It is regrettable that Chanel has to resort to such puffery.

Unexpectedly, they chose the simplest way, and played it straight, creating a one-and-half-minute video for its haute couture collection that is worse than the cruise. A stretched-out roll of white paper as backdrop (footprints in one frame was included) for models that are no Pat Cleveland (or, to be more Chanel and a tad more current, Cara Delevingne) to execute what might be considered a dance. If this was a Hollywood casting call, not one would get a job. 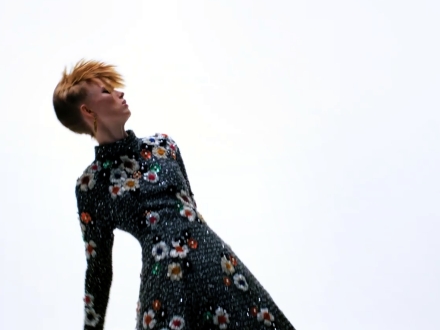 It can be assumed that the video is conceived to just show the clothes. What is shown? Nothing much. It’s hard to see when the editing is frenetic and lighting capricious. Astonishing it would be if anyone thought Virginie Viard would surprise. We know the designs would be as expected, so we don’t pitch our hopes high. She’ll likely add more sequins, and she does, she will play with tweeds, and she does, and and she’ll work with ruffles and gathers, and she does—this time in a light-grey, two-piece that could be homage to Princess Diana’s wedding dress.

The thirty-look collection (not all were shown in the video) of nothingness is apparently “marked by a desire for shimmering opulence and sophistication (that word again!)”, according to their self-sell. The culture of couture is, if we understand it correctly, consistent from the first sketch to the last image, everything by default had to be haute. It requires quite a stretch of imagination to place an unimaginative video within the realm of the sophisticated.