The haute couture season opened up with nymphs in need of gowns, but elsewhere, at the house that Elsa built, its designer was just quietly sketching away

Perhaps they did not have enough time to prepare the clothes or enough money to make them. So they put on the Schiaparelli website a video of designer Daniel Roseberry (above) sketching in Washington Square Park in Manhattan, New York City. A straightforward presentation without magic or myth, nor bells and whistles in the homepage for those interested to uncover more. No concurrent video-post on Youtube to explain why he did what he did either. Just old-fashioned drawings, emerging from sweeping hands and deft strokes. A designer and his vision on paper.

It would seem that, due to unprecedented circumstances, the American designer has to remain in the city. The video shows him getting masked up before walking to the 150-year-old park through deserted streets. He finds a wooden bench and sits down to sketch. Before he picks a pen, he removes his mask. The video also shows snippets of him in a studio (or, perhaps, his home), and snatches of his inspiration, which include old photographs of the work of Elsa Schiaparelli herself. The video ends with a close-up of the sketches. There are not clothes. 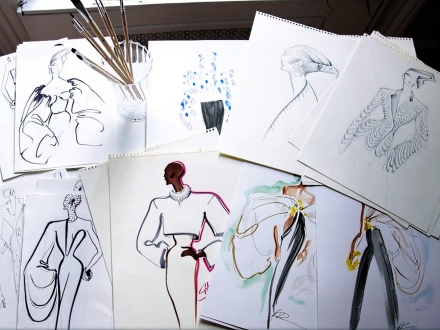 It’s hard to determine how good the collection is, based on a dozen or so of admittedly good sketches (31 of them was eventually shared with Vogue.com). Or imagine how haute couture can take shape without an atelier and without the metiers. This is Mr Roseberry’s third haute couture collection for Schiaparelli. A Thom Browne alum, he has a predilection for dramatic shapes that recall high fashion of another era. The humour and irreverence so much associated with the house have not been evident. But asymmetry, draping, and poufs that sync with the perception of French fashion are.

Mr Roseberry calls his delineations “couture imaginaire”. If we imagine what the sketches would be like as real clothes, they would be dramatic and would elicit the social-media description, “stunning”. These are imaginative designs, with a spirit of the haute that has been slowly easing out of couture. But would they attract a clientele at a time when even imagination can’t show us what the months ahead would be like?

One thought on “Some Schiaparelli Sketches”