Barely a day after Gucci’s new season, the collection is already controversial. The show opened not with its usual explosion of colour and visual mayhem, but a prelude that was, after the presentation, upstaged by a model who thought the segment she was in not acceptable. In a set of clothes that look like they could have been toiles, Alessandro Michele sends out what appears to be straitjackets, alluding to those worn in certain medical institutions. The model, Ayesha Tan Jones, scribbled on her hands, “Mental Health Is Not Fashion”, and held them up for all to see. Gucci later claimed this was not part of their show.

Mr Michele’s Gucci is, of course, not a newcomer to controversy. For the autumn/winter 2018 show, he set the runway in a space with an uncanny resemblance to an operating theatre and paraded models holding severed heads or wearing assorted head wear, including Sikh turbans. Then there was the Dapper Dan issue (which was later resolved by a collaboration) and the “blackface sweater” of early this year, eventually removed from the selling floor. Talking of runways, the travolator as catwalk is not the first in a fashion week since Kim Jones had presented his Dior last season on a similar moving pavement.

The controversy, and the high-concept inspiration—grandiose reference to the French philosopher/social theorist Michel Foucault—threatened to down play what could be an important (or, again, controversial) development for Gucci: change. While still recognisably Gucci in its jumble of hints of the past, the effect is less pronounced that what we have been used to and certainly, for some, too diluted. From the two camps we spoke to, fans declared that the collection has “none of the zany-ness” they like, while non-fans have insisted that “he (Mr Michele) is essentially doing the same thing. Again”.

Between that, sex. BOF’s Tim Blanks reported that Mr Michele said, “The way Tom Ford looked at sex was ambiguous… It was more like something pagan, and I was drawn to that perversity.” Pagan perversity! What would Mr Ford have said about that; he who projected, during his tenure at Gucci, an image of raw, highly-charged sexual energy? Or his partner-in-crime, Carine Roitfeld? The sex talk with Mr Blanks is at odds with the show notes, which, as reported by vogue.com, state that the clothes “allow people to walk through fields of possibilities, cultivate beauty, make diversity sacrosanct, and celebrate the self in expression and identity,” which, frankly, does not sound particularly sexy. 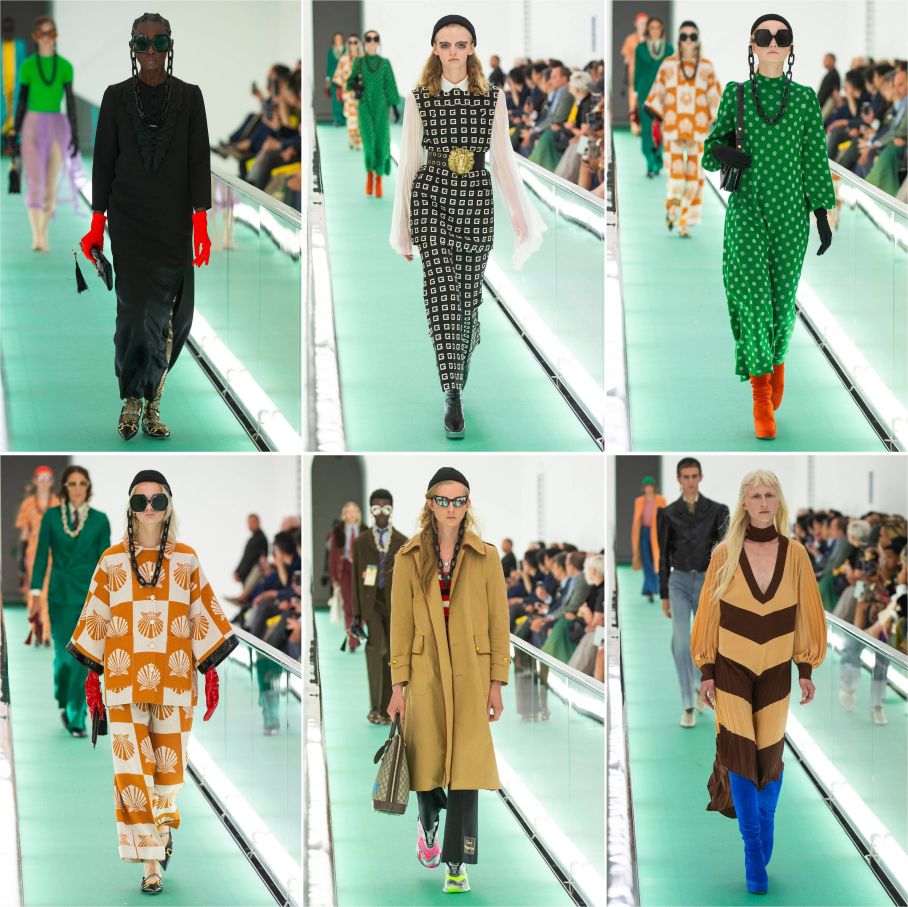 So, what is sexy to Mr Michele? We’re not sure. Sexed-up has never been really his Gucci. In fact, it is hard to see the sex in this collection, even if there are bare breasts behind a diaphanous top of what appears to be a union suit, exposed panty and pantyhose under more sheerness, and a leg or two stuck out of slits in skirts (which would be appreciated on LA red carpets), or, in one look, negligee as cocktail wear. As usual, a cast of characters, blank-faced (or po-faced?), but still characters, populate the (movable) runway, but, these humourless-looking beings do not appear, even sans macabre props such as severed heads, particularly sexual. They look more like sophomore undergrads gone bonkers from too much study. Or, perhaps, as with much of today’s Gucci, we should not be taking the talk of sex so literally and seriously.

As expected, Alessandro Michele, being Alessandro Michele, is not able to stay away from styling that leans on the OTT, but this season the clothes are simple (and not print-heavy) enough for them to be better examined. Sure, the usual gender-bender looks are here—such as the men’s frock coat in a pink that would have Schiaparelli beaming with delight—but it should also be said that noticeable in the collection are a better fit (not the too-big dresses of the past) and suits that sing with the allure of Italian tailoring. The details, too: pleated gussets that swing from the side of a sleeveless, A-line dress; one coat similarly has pleats radiating from below the bust. Not major, for sure, but appealing to those of us who seek these little, design-in-mind touches. Logos alone, or galore, do not fashion make.