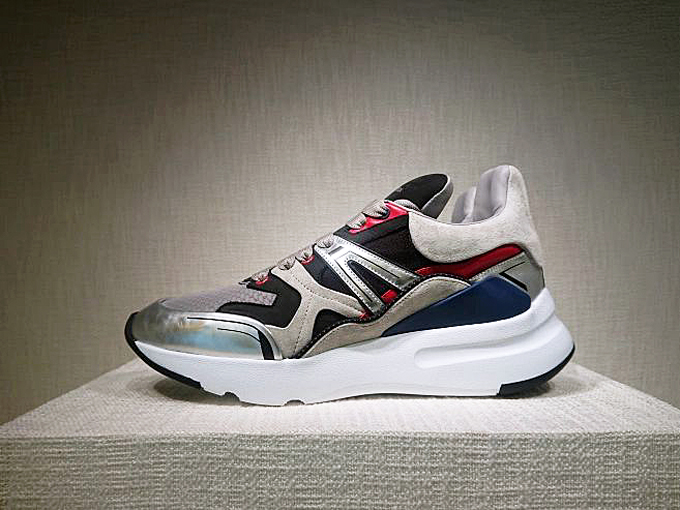 When Alexander McQueen collaborated with Puma in 2005 and released their first kicks a year later, no one thought of describing the odd sneakers with less than sleek looks “dad shoes”. More than ten years after the pairing, dad is no dud.

To be sure, the early Alexander McQueen X Puma sneakers—inspired by what was described as “Anatomical Veins”—were more sci-fi-looking than papa-off-beat, but the latter designs of the diffusion line McQ with Puma were, to us, rather prescient. We are referring to the Tech Runner, all chunky mid-sole and complex piecing of the upper. The Balenciaga Triple S, dare we say, arrived somewhat belatedly.

Alexander McQueen, without its founder—himself a known sneakerhead, reportedly with over 500 pairs to his collection—continues with the silhouette first seen in 2014, the year Ricardo Tisci re-imagined Nike’s Air Force 1, an exercise that comes years after Mr McQueen brought luxury fashion to sneakers by teaming up with Puma.

The latest, called the Patchwork Runner, has kept to the spirit of what was introduced four years ago. Even with “Tech” struck off its name, this Runner has not lost its technical vibe. Like much of the dad’s shoes now, there is a thick mid-sole—this slightly elevated at the rear. The mid-sole is white, today’s preferred colour, and is base to a mixed-fabric upper that is reminiscent of the older brother of 2014.

Overall, the Made-in-Italy shoe has the heft of what fashion-oriented sneaker fans love. This come from the generous padding, which envelopes the foot comfortably, Since this, is after all, expensive footwear of fashion, it is unlikely anyone—us included—will take it for a run. Those who cop a pair may not be certain of how it performs, but they could be clear that, while the Runner may not go on track, they are on trend.

One thought on “The Runner You Won’t Run In”