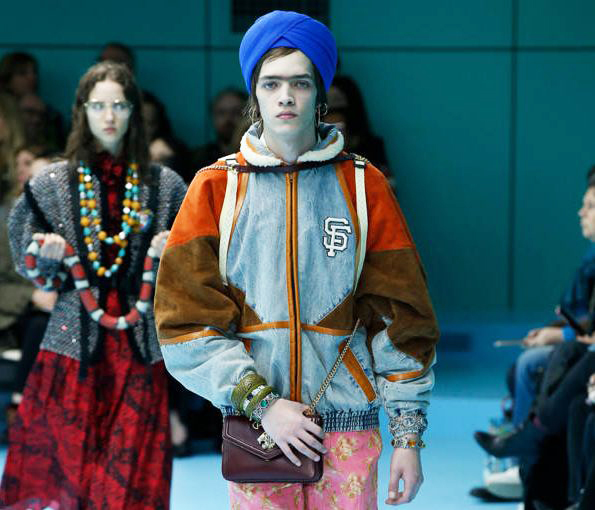 Gucci, there’s really nothing more to say about your clothes since there’s little that can be said of your offerings that we have not already expressed before. So, this season, we looked at how your pieces were styled for the catwalk: what (more) theatrics would you succumb to? And, boy, did you not disappoint. High drama made all the more apparent and discernible by your wonderfully bright staging (as opposed to last season’s eye-squinting/straining gloom), so bright that it was actually clinical—operating-theatre clear, as your set was designed to be every (cosmetic?) surgeon’s (or pathologist’s?) pride and delight.

And because all was distinct to see, we could not miss, not for a moment, the daastars—turbans that are unmistakably a physical part of the Sikh identity—placed on the heads of non-Sikhs. If they weren’t attention-grabbing enough, there, too, were hijabs, niqabs, and tudongs, additional headdresses that are traditionally symbols of faith, not fashion (as well as, oddly, what appeared to be a third eye, not perhaps dharmic, but definitely an eye between eyes). If they did not disturb sufficiently, there was the thoughtless (some say “wicked”) and inexplicable pairing of tudong and daatar!

Frankly, we do not know for sure what Alessandro Michele was thinking at that moment, or moments before that. Or, was he even thinking? We really want to frame this as inspiration, but appropriation comes to mind faster than we could say ‘head wrap’. Why is a daastar (and kindred head wear) important in the communication of a fashion statement? Is it even appropriate given the religious sensitivities/phobia of the present time? Could this be Mr Michele’s version of diversity? Or, are we too serious about something as flippant as accessorising models for a fashion show? Should we just take it as ‘fun’? Can having fun bear no consequences?

Some media reports in the past have noted Mr Michele’s “encyclopedic aesthetic”, but surely even Wikipedea would have informed him of the daastar’s identity to Sikhism, or, that it is men, not women, who wear them. And for sticking to what distinguishes a Sikh male, many have been victims of prejudice and attack, including mistaking daastar wearers for Muslims. It’s fine to live in your own head; it’s not when you trivialise what others put on theirs as identity of self. This, Gucci, isn’t like putting a crown on a head to satisfy some fantasy about royalty or beauty pageants.

When once, designers depended on make-up and hair styles to augment their seasonal looks, we now have designers making their own wearables (which could then be credited to them, rather than to external collaborators), to replace the artistry of directional make-up (remember the single-line bright eye colours of Raf Simons’s Dior) and hair (remember Julien d’Ys coiffure for Comme des Garçons?). Even wigs and face jewellery are no longer enough.

Are head and face wear, as indicated and seen in nearly every look presented on the Gucci catwalk, really important fashion categories? (Not to mention severed heads!) Or, are the (sometimes outrageous) coverings merely a distracting “newness” to obscure what are essentially again-clownish clothes? The circus association here is deliberate: How else do you explain Mr Michele’s pulling together of the allusions to disparate times, cultures, and religions to yield goofy and OTT looks? Alessandro Michele is the ringmaster of ringmasters. Messrs Dolce and Gabbana, step aside.

4 thoughts on “Gucci Not Good”