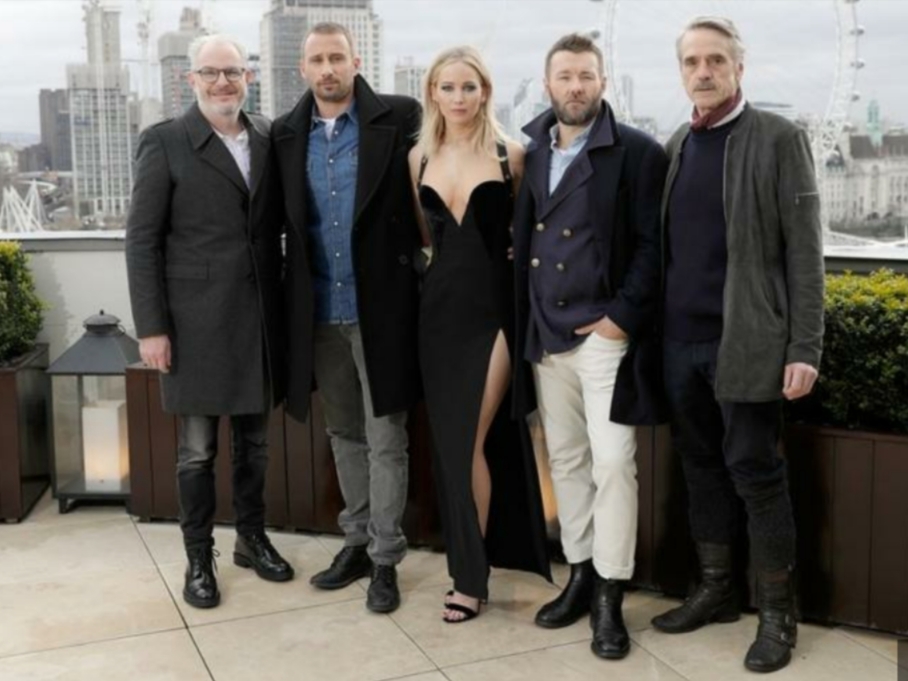 Like the rest of us, feminism is confronting confounding times. Jennifer Lawrence, too. She wears a dress with conscious volition and she’s compared not with other women, but male co-stars! Suddenly, out in the cold, it’s all unfair. The men get to cover up, and the lass has to be all sexy, in a dress with a slit that went up to there. The dictates of photo ops?!

Would a woman who is vocal about unequal pay in Hollywood succumb to sexist pressure and don a dress to steal the thunder from the guys? Or have we moved inexorably from fat-shaming to slut-shaming to dress-shaming? When Beyonce wore next-to-nothing, the “naked dress” is hot. When Jennifer Lawrence takes to the sartorial path of Elizabeth Hurley, she is “poor Jennifer Lawrence wearing a small amout of fabric some might call a dress”.

Sure, it’s still winter in London, but some women can take the cold better than others. What’s five minutes (according to Ms Lawrence) of the cold (if it’s at all cold to her) to show of what she thinks is a “fabulous” Versace dress? Conversely, have you not seen girls in neoprene hoodies walking down Orchard Road in thirty-two-degree heat for the duration it takes to get from ION Orchard to Plaza Singapura? Like Ms Lawrence, they do it for fashion.

What’s more intriguing to us is her choice of dress. How did she go from Dior to Versace? Indeed, Ms Lawrence says she loves fashion. But a fashion lover can’t love all fashion, can she? Or are we just a little potted in our thinking, a little too unwilling to see a style star traipse the path of flashiness too easily available to those who need such meretricious looks to win attention, such as the safety-pinned then starlet Liz Hurley?

Ms Lawrence, thanks to her partnership with Dior, was a couture kind of fashion consumer, we thought, tripping/falling spectacularly during the 2013 Oscars presentation in a gown Raf Simons designed. Ms Lawrence, as we see her, is not quite inclined to bare as much as Rihanna; she has too much self-confidence and self-awareness—smarts and goofiness, too—to need Donatella Versace’s brand of high-octane, sexy-wins glamour.

The red carpet moment, whether on an actual red carpet or not, has always been a chance to show some physical assets. Isn’t it the same for brides? Have you seen a bride in a coat? Which explains why few care for a winter wedding. As Ms Lawrence said in her passionate defence on Twitter, “And if I want to be cold, THAT’S MY CHOICE.”

Choice, that’s a powerful thing to have.