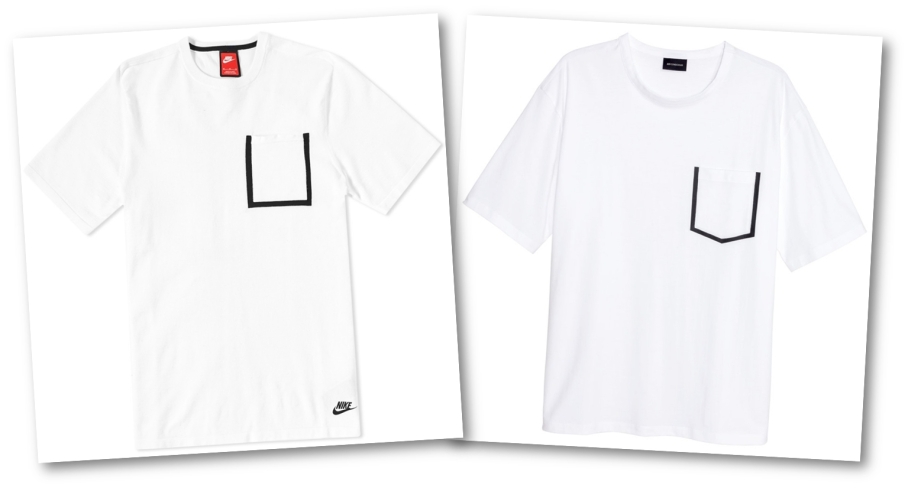 Which came first? In this case, it’s hard to say. Our Kuala Lumpur correspondent spotted the Nike (left) as early as March in the brand’s store in KLCC. In Singapore, it arrived sometime last month. We didn’t discover the H&M (right) until last week. Since we could not determine the production timeline of either, perhaps great design minds do think alike?

Framing the seamed part of the left pocket of a T-shirt is not a new design idea. In fact, Nike has already introduced something similar last year. With all manner of easy-transfer tapes available at the haberdashery, these strips are increasingly employed as trims on almost every part of clothes. Drawing attention to a plain tee’s otherwise unremarkable pocket, at one time by using a contrast fabric, appeared in Japan a few years ago.

Here, the black borders of the pocket on both tees are different. On the Nike, it is knitted into the bodice, which means no additional stitches to make the underside abrasive to the skin. The H&M, too, is stitch-less as the border is a print (the same T-shirt, in fact, appears with other geometric prints). The difference, too, is in the shape of the pocket: one is a rectangle while the other is a pentagon that’s usually seen on shirts.

If price determines quality, then the Nike wins hands down. Here’s no ordinary T-shirt and it isn’t made of cotton jersey. It looks like a sweater knit to us, but Nike calls it “body-mapped fabric” which is, in fact, computer-aided knitting with yarns of 55% cotton and 45% nylon. The selling point? It “delivers superior fit”. That, to us, means it is shaped to hug the body, not something terribly on-trend these days. The problem, if it is one, can be solved by choosing a tee one size up.

Apart from the fit described as superior, other details do make this T-shirt better. There’s the classic crew neck and the raglan sleeve (fashioned like a split yoke in the back), which sits beautifully on the shoulders. There’s also the looser-knit panel in the upper, centre-back that appears to be designed and placed for ventilation, a thoughtful detail since such a top could be a possible heat trap, given the punishment often meted out by our weather.

The H&M version—part of the new ‘Conscious’ range—is designed to appeal to those who are into more relaxed shapes. Its potential handsomeness is, however, somewhat negated by the oddly wide, slightly misshapen neckline in a non-ribbed 100% cotton that’s in actuality the same as the tee. Perhaps our obsession with details does not matter at all here. In fact, in H&M, that’s a tad silly.