One is a fairly conservative shoe company till Nike bought it. The other is a Japanese label mostly described as “punk-influenced”. Together, they have created two pair of shoes that confirm what the Sex Pistols sang in 1977: “Your future dream is a shopping scheme”. Cole Haan and Mastermind Japan’s reiteration of the American shoe company’s Zerogrand sneaker/dress shoe hybrid is definitely shoppable, but is it likeable?

Cole Haan is not really known to collaborate with obscure names. Their partnership with Todd Snyder last year yielded shoes that teetered on the unadventurous side. In fact, until its association with Nike, Cole Haan had not offered a shoe as liberal-leaning as the Grand series, footwear with soles that tapped into Nike’s wealth of cushioning technologies.

As part of its divestiture plan back in 2012, Nike sold Cole Haan to private-equity firm Apax Partners. It is unclear how long more the air technology introduced by Nike after its acquisition of Cole Haan in 2008 can be used now that the latter is not part of what many consider the biggest sportswear brand on earth. Cole Haan has renamed its first Grand shoe with engineered-sole, the Lunargrand, as Original Grand, perhaps to distance itself from its one-time partner—understandable since one of Nike’s most popular soles is the equally light Lunarlon, a foam-based cushioning system on which the Lunargrand was built, and is now even an insole, as seen in the Converse Chuck Taylor All Star II. 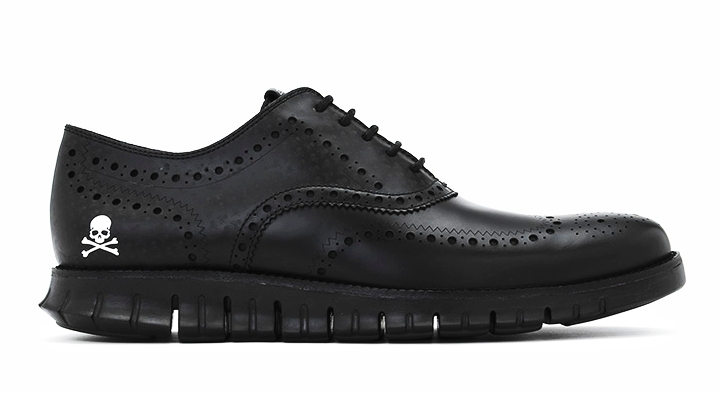 The Zerogrand was introduced in 2014 as Cole Haan’s lightest and most flexible shoe. At its inception, the Zerogrand weighed no more than 290g each. With 8 slots in the sole, it is unsurprisingly bendable, a boon to those who have a tendency to run for their public transport. It came at the right time as sneaker/dress shoe hybrids were gaining traction faster than you can say dash.

Now, there’s the surprising collaboration with Mastermind Japan. We say surprising because we expect an alt-brand such as this to work with the likes of Dr Martens whose history with the British punk movement provides a natural fit. Mastermind Japan is unconventional in sartorial terms even when the brand is categorised as “luxury”. Designer Masaaki Honma, formerly with Yohji Yamamoto, has created a collection of anti-establishment looks symbolised by the logo of scull and crossbows. Given his background, Mr Honma does not operate in the shadow of Saville Row although his label is known for its expensive, often artisanal fabrics. These are clothes Sid Vicious, if alive, would approve.

Upfront, the re-imagined Zerogrands are very handsome shoes and extremely comfortable to boot. Two versions—both limited editions, the sales staff will be quick to tell you—are available: the Wing Oxford and the Chukka Oxford. The broguing of the former is especially appealing since it continues Cole Haan’s marrying of the decorative details of country gentlemen’s footwear to the performance-enhancing sole of modern sneakers. As expected, the shoes are entirely black, except for the white Mastermind Japan logo positioned on the outside counter that is patterned with tone-on-tone micro-skull-and-crossbows, as well as the branding on the tongue. They’re discreet little shout outs of the shoes’ potentially subversive stance.