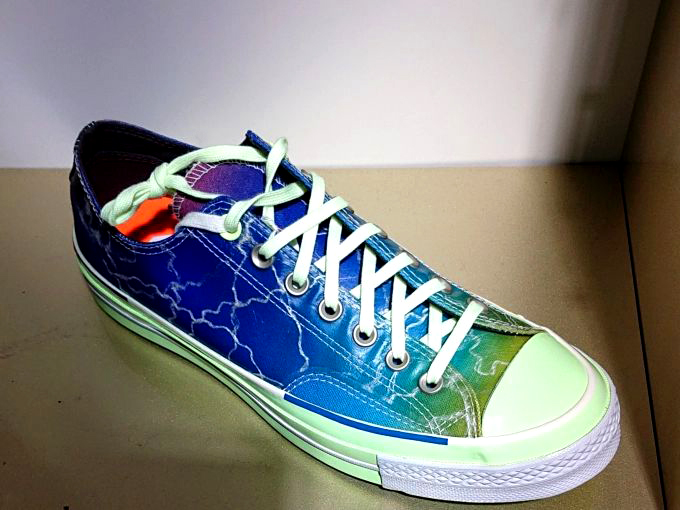 I have been getting this vibe that sneakers shall soon be over until they’re back. People are telling me leather shoes in all their sensibleness will be 2020’s dad’s shoes. Really? Who knows how this prediction will pan out. I look at all the non-sneakers I own and I am not certain I want to wear them in place of my Air Maxes, all the time. In fact, I think it’s unfair that after weening us sneakers for more than ten years, those who have the power to wield are not telling us that the kicks we have so loved aren’t quite cool anymore.

I am not giving up on my sneakers. Nor looking at them, such as this pair of Pigalle and Converse collab, fashioned on the decidedly low-brow Chuck 70, a basketball shoe that’s now mostly not seen on courts. Truth be told, I am not much of a Converse fan. They are, to me, just too school-shoes-like, with little to no personality, making basic kicks such as the Adidas’s Stan Smith decidedly charismatic. But occasionally, someone (or some brand) comes along and gives the Converse a much appreciated makeover—these by the America-leaning French brand Pigalle, too.

The first thing that strikes is the colour. Rare is the Converse that is this multi-hued—gradated, too. The lightning streaks on the Chuck somehow make the mixed colours less hippie while the upper’s technical fused film (which gives the cotton canvas a nice touch) make it rather of the present. That most of the mid-sole comes in this bright lime green augments this Chuck 70’s deliberately anti-white appeal.

This is not the first time both brands have paired up. Pigalle, founded in 2007 in the French neighbourhood of the same name by Stéphane Ashpool, has become one of Europe’s rare streetwear brand that has found international fame. Its Converse collaboration, coming after major success with Nike, was widely noted in last September’s All Star Pro BB, as well as the Chuck 70 Ox, which, if I remember correctly, was a lot more pristine.

There is a palpable sense that sneakers, for those who still worship athletic kicks, are losing the exaggerated silhouettes of the past years. This Chuck, not chunk, is suitably streamlined and adequately forward. With its marine-coloured upper, this is the shoe to go with those printed pants we’re told will be big this year. I, however, have other ideas in mind. 😎