One-time fashion designer Heath Yeo’s just-concluded solo exhibition, One Machine, One Stitch, One Man, at The Arts House is a celebration of the applied arts of the Peranakan sulam. A few visitors were heard saying that the pieces were “pretty”, which, to some of us, did not necessarily point to refined

As I approached the first three black mannequins to the right of the entrance of Gallery II of The Arts House, I immediately imagined what my grandmother, eyes dilated and kerosang quivering, would have said: “kus semangat, apa ni (my goodness, what’s this)?” As if reading my thought, a middle-aged woman next to me said, with no intention of hiding her feelings, to her male companion, “eh, sapa mati pulak (who died)?” I pounced at the delectable disdain and asked her, “modern, right?”

In front of me, two dummies were draped in kebayas—the blouse-jackets that have become synonymous with what the Nyonyas of the past wore. The one that provoked the woman and brought a smile to me was a Cruella de Vil of a baju: black—the right half of the bodice similarly ebony, with the sulam (embroidery) in white, while the left half in reverse, the sum possibly a chromatic affront to the typical modern Nyonya kebaya of colours so vivid that they’re only out-matched by those of Peranakan porcelain.

Of the three mannequins, one, with its back facing front, was left telanjang—naked—except for a small, white, embroidered, rectangular piece, the size of a credit card, on the nape that sported a cursive font for the word “one”, which, a staffer eagerly volunteered, denotes One Machine—Singer, One Stitch—running, also known as straight, and One Man—Heath Yeo, the half-Peranakan fashion/bridalwear-designer-turned-embroiderer, considered to be one (again!) of the two of the dying breed of sulam craftsmen (the other is Raymond Wong of Rumah Kim Choo fame) left in Singapore. 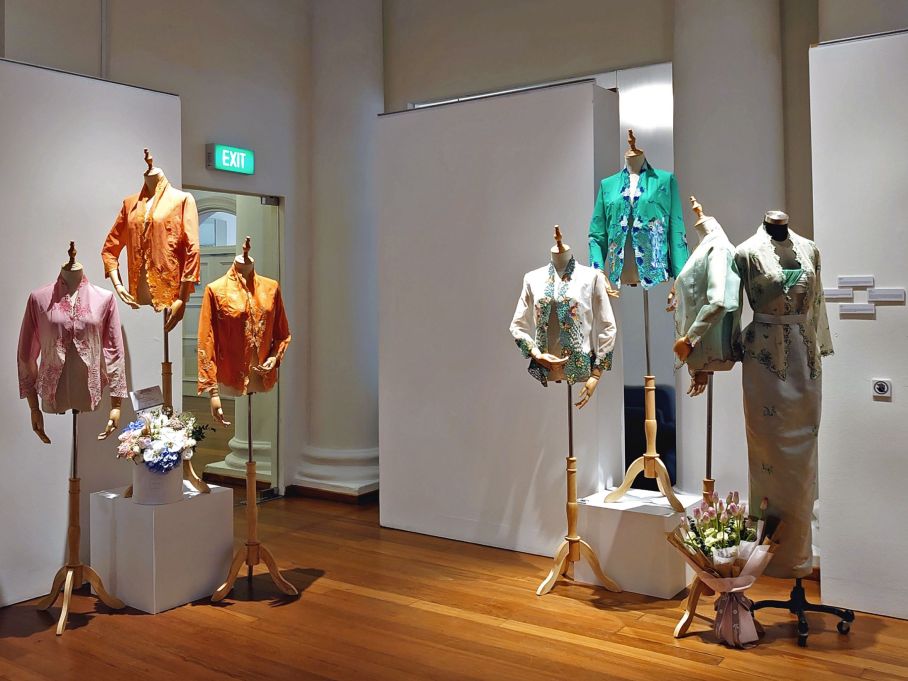 Scanning the space, I was rather puzzled as to why the works on display deserved the gallery of The Arts House. They looked, to me, underwhelming, like a Baba’s daily meal served on a tok panjang (long table) when a kitchen table will do. In total, the five-day exhibition comprised only 17 kebayas (although it did say 20 in the exhibition notes), all of minimal variation and hemmed-in aplomb. A smaller space, such as a meeting room in a community club, would have better afforded the intimacy attendees tend to seek in shows examining the details that speak of needle craft guided by hand.

It should be noted that Mr Yeo’s work is not the result of just needle and thread applied without other tools. It is mainly achieved with what he called “a regular sewing machine”—in his case, a handsome, black and gold Singer of indeterminate vintage, which, as he emphasised to a captive audience during a demo, “can do embroidery”. The flexibility of this sewing machine is somewhat legendary and dates back to the initial and popular years of the brand. As early as 1856, Singer marketed its sewing machines by way of window displays at its New York HQ that featured attractive ladies sewing and showing off “art” projects, including embroidery, probably without the foresight that it’d be one day used for sulam.

According to media reports, Mr Yeo, a Lasalle College of Arts alum, learned to embroider from the late Mdm Moi Tai Ee of the now-defunct Kim Seng Kebaya & Embroidery, a custom service of some repute in the ’70s and ’80s, at least in the Peranakan community. Mdm Moi had apparently earlier rejected Rumah Kim Choo’s Raymond Wong as a student (he was urged to use his degree in accountancy for better prospects instead) when he approached her to seek tutelage. Mr Yeo, as fate allowed, was a lot luckier; he had, in fact, met Mdm Moi during his NS days with the Music and Drama Company (dabbling in costume), and had later approached the senior embroiderer to accept him as a learner. He apprenticed for a mere two years before striking out on his own.

Unless you are an aficionado of what Bibiks wore, the name Heath Yeo may be unfamiliar, but those who don’t forget local news may remember, as I do, that back in 2012, Manhunt Singapore winner Jason Chee wore Mr Yeo’s custom-made baju—“a sexy, modern warrior look”, as the designer told The New Paper—in the costume segment of Manhunt International in Bangkok. The two-piece (with accessories reportedly bought from Tekka Centre), comprised a sheer shirt of pale gold (or, was it yellow?), with Mr Yeo’s requisite sulam flowers (in blood red) and a sheath of batik that served as a sarong, but left little to the imagination, so little, in fact, that fashion show producer and author Daniel Boey commented to TNP that Mr Chee looked “like a Javanese rent-boy”.

Aesthetically, Mr Yeo, who by then was a proprietor of a shop (now closed) at the Tudor Court that went by the straightforward name of Sulam by Heath, would not have adapted the traditional Baba wear baju lok chuan (basically, loose-fitted Mandarin jacket that the menfolk preferred) for a Manhunt final. The kebaya, traditionally in semi-transparent rubia (also known by the trade name Robia, a lightweight cotton fabric of high thread count, usually English, but not always) or voile (cotton is common, but not necessarily Swiss), could, by 2012, be adapted to project a less ancestral—campier—masculinity, which was not at odds with the competition itself. Online trolls thought Mr Yeo was, simultaneously, promoting his sulam business, while I was not convinced that it was a statement about Singaporean fashion even when he was sure: “people look at this, they can identify that (Mr Chee) is from a tropical island”.

Unlike his Manhunt creation, Mr Yeo’s interpretations of the kebaya leaned on the more traditional. The fabric was mostly cotton voile and the sulam comprised running and satin stitches, and the kerawang (web-like cut work), in combinations that were unsurprisingly less complicated than those stitched by women in the past, who had all the time in the world to embroider to astound. Some seams were finished with a single line of ketok lobang—tiny, knocked (more precisely, punched) holes, which are a tad similar in resultant look to (and just as decorative as) fagoting. The sum effect, however, was somewhat lacking in what may be considered a sensual garment.

Heath Yeo (left) and his kebayas

And therein lies my beef. A kebaya top may be considered a “work of art”, but it is only one part of the equation. Modern, IG-crazy Nyonyas may wear their kebayas with tank tops and denim jeans or those irritating cut-offs, or nothing at all, but one whose reputation sits on creating them in a glorious light should present the sarong kebaya in its entirety—with the batik sarong, rather than having the blouses hung, unpressed, on mannequins with the indifference of a shirt draped over the back of a chair.

Any regular wearer of the sarong kebaya would insist that part of the appeal and sensuality and indeed the charm of the outfit is how the top is paired with the bottom: a clash of sulam and the batik motif, too, has artistic merit, and mirrors the keen eye of the wearer. Depriving the kebaya top of a deserving batik sarong also meant that the outfits were only half assembled—tak lengkap, and attendant accessories, such as the kerosang (a fastener of usually three brooches kept together by chain-links) and the pendeng (metal belt), both so vital in Peranakan fashion, were not given their rightful place in the compete look.

But I hear the upbraiding: that the highlight of the exhibition is the sulam, essentially Malay/Indonesia needlework that the Nyonyas adapted with Portuguese and Dutch lace-making techniques. Interestingly, the publicity material stated that this was an “exhibition of embroidery art and fashion”. Or, was that embroidery fashion? Let’s stick to the embroidery then. I must admit that, although I can jait (sew), I am not an expert the way Mr Yeo is, but I think I am sensitive to refinement, which in well-executed crafts do not waft off like the smell of curry left to cool on the stove top. Mr Yeo may have the advantage of the sewing machine and the hoop, but, to me, the embroidered flowers and such lacked a certain depth.

It is more than just subject matter (which is influenced by cultivation and personal preference) or visual aesthetics (which is affected by taste). Mr Yeo’s work might have displayed a dash of deftness, but not daring. Nor does it express a flair for the imaginative. It was neither compositionally surprising or chromatically unusual. Some work showed restraint to the point of dullness; others, with cut work, flora, and birds coming together in such a way that they looked bedraggled.

I once heard one of my aunt’s cherki kaki (fellow player of a Peranakan card game, mostly popular among the ladies) said of the sulam she used to do when her eyes were better, “lebih benang kita guna, mestilah lebih halus, lebih hidup sulam itu (the more thread we use, the finer and the more three-dimensional the embroidery must be)”. Fine or halus is a Nyonya obsession: even the ulam in nasi ulam (herbed rice salad) must be hiris (sliced) so halus that they resemble strands of hair!

As if to contradict my observation, I overheard someone telling Mr Yeo that his work “is good enough” for use in French couture. The sulam on kebaya, in general, is essentially folk art, which, unlike the French or Chinese versions, can barely be traced to any royal court tradition (except perhaps to the Javanese’s) that resulted in a higher form of textile art. Couture? Perhaps Francis Cheong’s. The Peranakan womenfolk adopted this needle craft and made it their own by using Chinese motifs (sometime other culture’s) and effecting a sense of refinement already seen in many of their applied and culinary arts. Heath Yeo’s sulam was admirable for it reflected his keenness in preserving the craft, not the advancing of the embroidery’s creative potential. Simply put, he didn’t inch it to another level. As my grandmother would say of his work, “tak cukup rasa, tapi boleh makan lah”—not enough taste, but can be consumed.