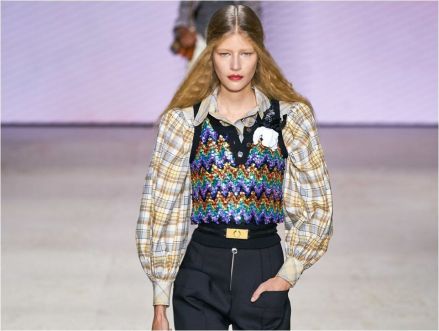 Since the time he was spotlighted at Balenciaga, Nicolas Ghesquière’s designs have the pleasing ability to make us wonder. How does he do it? Why does he do it? How does he come to such an idea? What’s behind his thinking? At Louis Vuitton, he conceives such compelling collections that those questions continue to happily enter our minds. A welcome occupation, musings that won’t come to those queuing to get into an LV store. And that’s okay.

As the media reported it, the inspiration this season is La Belle Époque (beautiful age, a time in Paris when the arts flourished). But it is one that gleefully clashes with the ’70s—no Sarah Bernhardt, no Lina Cavalieri, no La Belle Otero, perhaps Cléo de Mérode reincarnated as Catherine Deneuve, or, more likely, Anita Pallenberg (her “evil glamour” a deal maker!). Even his take on the Gibson Girl is more Katniss Everdeen than Dolly Gallagher Levi. The thing is Mr Ghesquière is not inclined to be so era-specific. He is especially deft at referring without actually pointing to references. Sure, there’s often the nod to the ’70s, as with this season, but it tends not to hum the same tune as others obsessed with that time do, such as Tom Ford or Marc Jacobs. 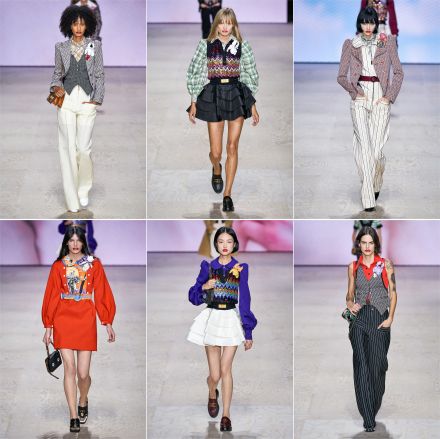 If associations with La Belle Époque are obvious, it is mostly in the prints, which seems like Jacques Gruber meets Kasia Charko (the illustrator of Biba’s ads and poster), handled with the delicacy of Antonio Daum’s crystal work and then put through the filters of MeituPic, and, occasionally, camo-fied. In fact, we can’t seem to get enough of the prints, intrigued by their composition, amused by how, in sum, they are less Art Nouveau than Flower Power. When they take the shape of clothes, there is a judicious balance of graphic interest and enhancement of the structure of the garments, which, regrettably, has been missing in brands that market prints as crux to their design.

Many commentators regard Mr Ghesquière as a futurist, but to us, he is more a fantasist with a flair for costuming a fashionable pantomime. The styling, for example, counters the general practice of what is considered tasteful. Wearing the collar outside the neckline of a sweater always felt to us too geekish, or, outside a blazer, like a pimp. Yet, collars, conspicuous and boldly shaped, are placed out of the neckline of the outers. How Mr Ghesquière also plays with curves within certain parameters: the pronounced but arched shoulders and the circular collar and rounded lapels can come together like an interplay of petals, is fascinating and a study of how a tad more is not necessarily superfluous. 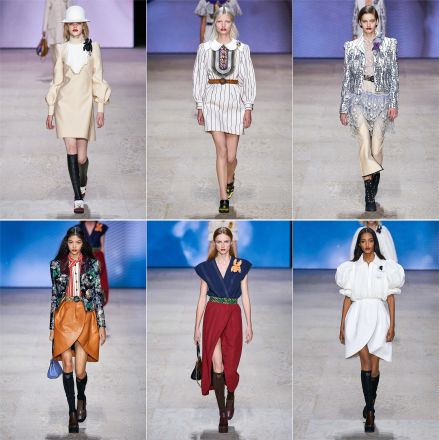 And the colours! They are not quite a riot—somewhat muted, in fact, but they are rich, negating the believe that only black is chic. In fact, black is not central to the collection, no one colour is. Against a video projection of blue sky and the transgender singer Sophie singing (and emoting), the palette projects a happy—slightly off-beat, if you consider the pronounced red and shape of the models’ lips—vibe that is not inconsistent with what the flower generation tried to nurture and communicate through their choice of ethnic-leaning clothes. Sure, LV is not quite that trippy, but in spirit, it’s as anti-conformist and anti-repressive, and beams with embraceable energy.

It is heartening to see that, while Louis Vuitton’s men’s wear is taking a trajectory of no aesthetic certainty, its women’s RTW is marching on extremely nicely under Nicolas Ghesquière. And as other brands under the LVMH umbrella continue with predictable hum (not, to us, buzz) and the usual codes, LV reverberates with much more directional and off-centre aplomb that continues to make the ride jaunty. Mr Ghesquière may need to look back to lurch forward, but some of us are eager to go along. As Joni Mitchell sang in 1970’s The Circle Game, “We can’t return we can only look/Behind from where we came/And go round and round and round/In the circle game”.