Is this the elegance the world is waiting for? 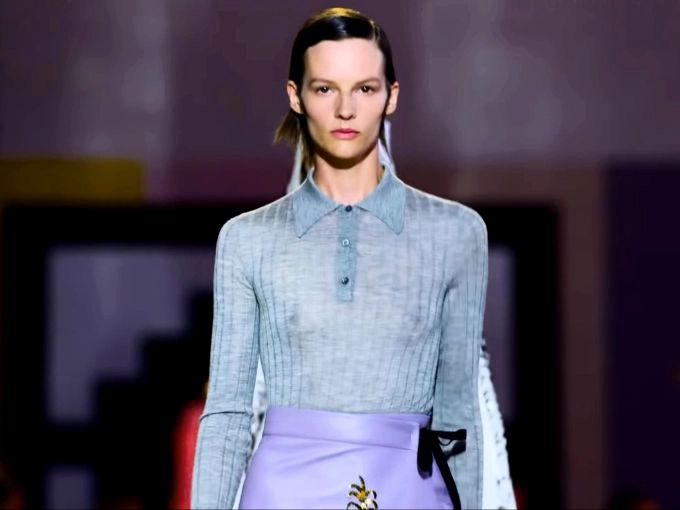 Miuccia Prada, the mother of modest dressing, has returned to the proper and the tailored, not that she has ever left them. But this season, there is more than sufficient pieces in the collection of refined, suited, almost other-era elegance to considered them core. But this isn’t the lady-like, Park Avenue-princess tastefulness that she was once famous for and had built the brand’s RTW on; this is far more calibrated for the post-#metoo era, as exemplified by Freja Beha, who opened the show, wearing a conservative pairing of long-sleeved polo shirt and a narrow skirt, with almost no makeup, looking positively the Queen of Cool herself.

Ms Beha was not the only model who wore makeup that looks un-made up. The rest too, and with hair—in a bob—looking so unstyled (side-parted and tucked behind the ears) that the do could have been fashioned after, not Anna Wintour, but mainland Chinese schoolgirls of the turbulent 1930s Shanghai, such as Rene Liu Ruoying (刘若英) as Ying’Er (英儿) in the 2000 film Fleeing by Night (夜奔, ye ben), willful, defiant of bourgeoisie beauty, and with pre-revolutionary zeal. Could this reflect Ms Prada as a political science student and a once-proclaimed communist? 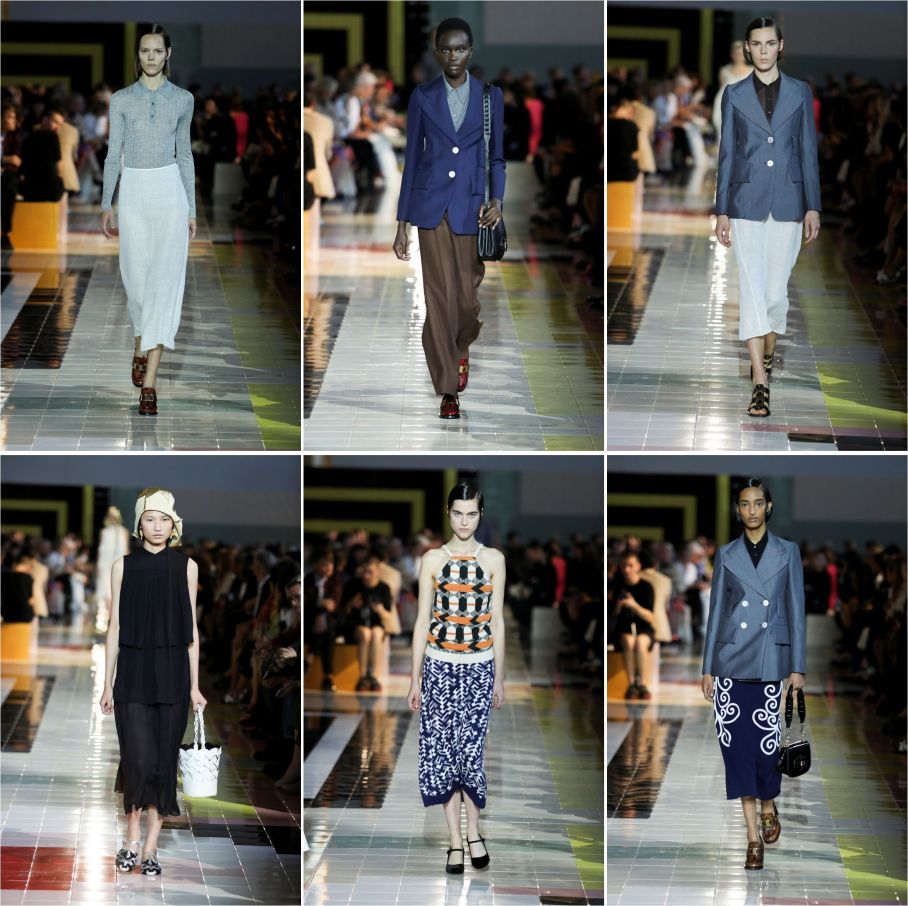 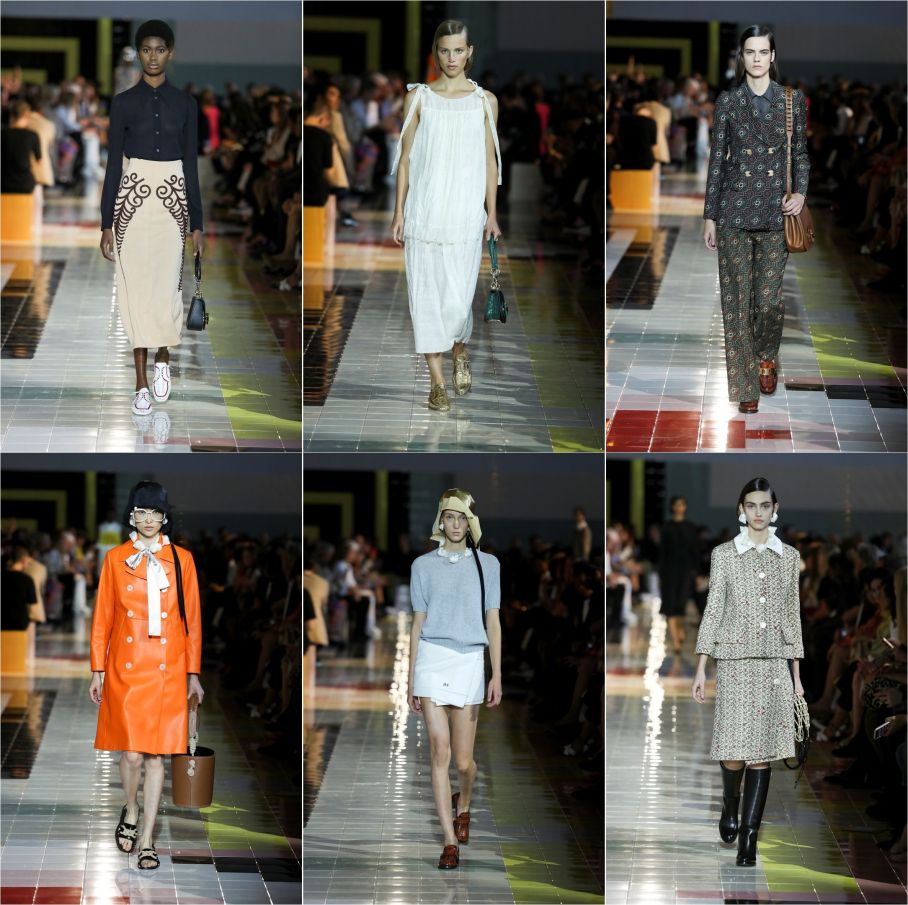 It is, in fact, this properness that appeals to us, if only because it is so rarely seen these days. Or, unappreciated. Miuccia Prada, who is not known to succumb to normative ideas of what’s fashionable, appealing, or sexy, not only revives the smart, almost geeky look that set Prada apart during the early years of its women’s wear line, but does so without nodding at the prissy. The clothes look grown up, which is refreshing in a market that seems keener and keener to cater to mostly the young or not old enough to be issued a credit card.

The silhouette is generally lean, body-skimming, and calculated to stay clear of exaggeration. Take the skirts. They sit relatively high at the waist, but not that high; they are longish, but not that long; they are slim, but do not imitate a pencil. When decorative detail is required, the appliques of fern placed on each side of the front, for example, has the effect of graphic boldness, without looking excessive; their megaphylls offering the curvy grace of paisleys. When jackets are required, Prada has them with expressive, notched lapels in the width of shoulders that Annie Hall would possibly appreciate. 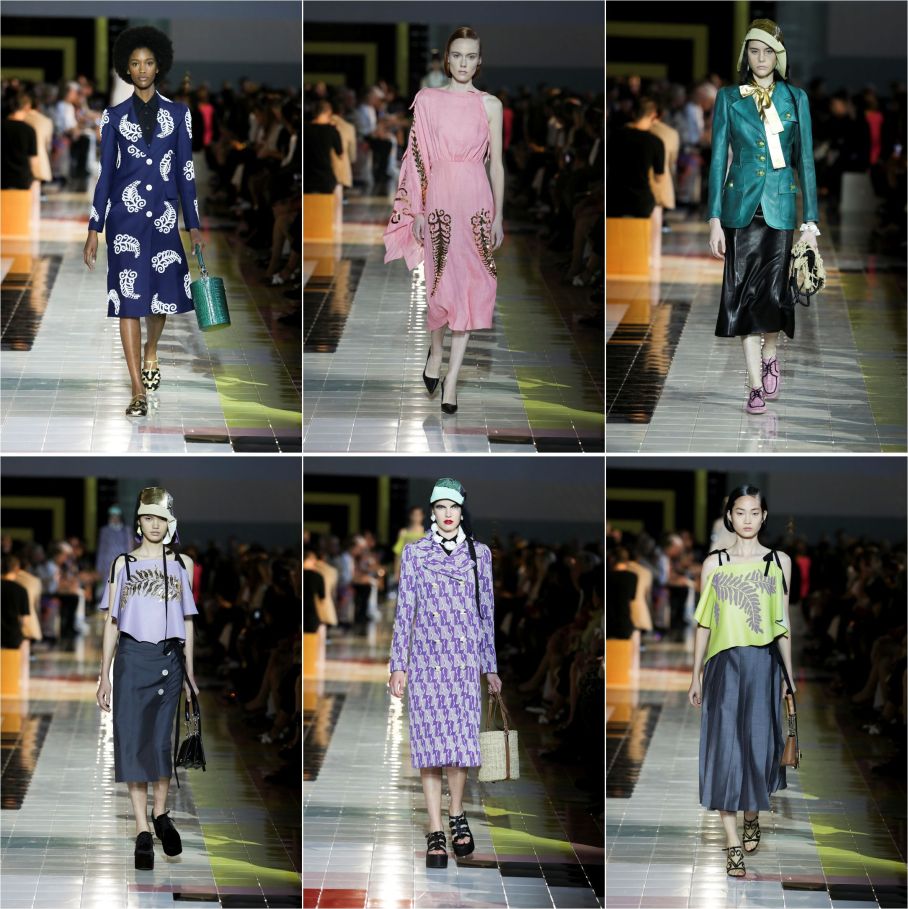 Unfortunately, Prada, the fashion label, isn’t what it used to be. With an unimpressive stock performance and a generally downbeat retail climate, plus store closures, even in a vibrant city such as Hong Kong (the brand will, next year, exit Russell Street, that, according to the South China Morning Post, is “the most expensive shopping address on the planet”; granted, the on-going protests that started in June has affected luxury businesses across the board), Prada seems unable to attract regular shoppers who can make the brand ring with the same resonance as that generated by those who embrace the undying dad-shoe craze.

What works against Prada is a dearth of new customers, those willing to give dressed-up sans T-shirt and jeans a chance. Looking around us, it’s hard to find women who turn out this way, or in a chic that suggests the opposite of street. Even further afield, not Kim K, and certainly not off-duty Gigi and Bella. Even those who want not the unsolicited attention of the opposite sex do not wish such sexy-lite style on themselves. Prada’s beautiful clothes, not just on the catwalk, but withal as they appear in-store, are perhaps too composed, too ideal, and, ultimately, too distant from the lives of those who want slouchy/oversized causal or off-beat retro-cool, or hip-hop-star-provocative, and a generous dose of trash.