CDG, the new sub-brand by Comme des Garçons, is like the streetwear giant Supreme: heavy on logos. It also shares something in common with the latter: Hanes tagless T-shirts 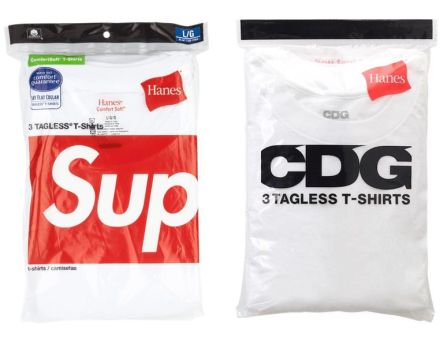 Comme des Garçons launched a new line, CDG, worldwide last week. An accompanying website that is also the latter’s e-shop opened for business this past Wednesday. CDG is not coy about its initials as the brand’s main selling point, literally littering its white homepage with the three black letters—animation that is reportedly conceived by design head Rei Kawakubo. Among the hoodies, blousons, and bags available at launch, the logo distinguishes the items more than design does.

This is, of course, not the first time CDG has used its initials to such oversized, dramatic effect. As part of their (now-concluded) collaboration with Japanese retailer Good Design Store (GDS), the CDG logo was, in fact, the main reason the small collection consistently sold well. Commercial and accessible, CDG is, by the looks of its longevity, more successful—and desirable—than the first initials-as-brand-name labels DKNY and CK, helping the house that Rei built secure a reported USD300-million turnover annually.

To hit that figure, one can’t really just rely on expensive products. There’s not that many catwalk looks you can sell either, but the CDG T-shirt, at the opposite end of haute, at the entry-level price of ¥8,700 (S$105) for a pack of three (compared to the S$100 a piece for the most basic of the tees of the Play line) is what you can move in staggering numbers. And for those who find the prices of the regular T-shirts prohibitive, the tagless versions (logo-less essentially) may proof to be a value buy, as is often the case in Supreme stores.

Whether there’s pent-up demand for something that Hanes sell all-year round at around USD10 for the three-piece pack or this is merely antithesis to the Zeitgeist, it’s too early to tell. Sure, this is a page from the Supreme play book (we don’t know what’s in it for Hanes), but if Supreme’s success with the tagless three is any indication, CDG may score with yet another product that can go on selling without a need for markdown. Some may deem this too low for Comme des Garçons to go, but it could prove to be a strategy most well Play-ed.

One thought on “Two Of A Kind: Helping Hanes”