Not quite cutting it, unless, for you, Louisiana—and the like—is home

After ranch work or post-rodeo? Justin Timberlake wearing shirt from his collaboration with Levi’s

What is there in fashion that entices pop stars to put their fingers in the design pie? Or, in the case of Justin Timberlake, toes in the bayou? I am not sure, but brands are constantly seeking the big hit by teaming up with pop stars as if a recognisable name is all it takes for the garments to be desirable—Mr Timberlake, with Levi’s, the latest in a slew of singers churning out clothes that have nothing to do with concert merchandise.

Mr Timberlake’s collaboration with the venerable, 165-year-old jeans brand is an odd pairing that seems to have popped up from nowhere. While the media thought him to be a stylish artiste, I don’t consider Mr Timberlake a star with the flair to put Levi’s on a certain elevation the way, say, Pharrell Williams has been able to raise the fashion cred of G-Star Raw. The result with Levi’s is, sadly, more rural, conservative heartland than urban, progressive downtown.

A few pieces from the 20-item collection

Was Justin Timberlake ever a style icon? I do not remember. Maybe it’s because he has never registered in my mind. He may have, in 2006 (my, 12 years ago!), brought sexy back, but he hardly moved the needle for style. Some people, girls mostly, tell me that he was the Nick Jonas of his time. I am not so sure of that. Besides, you really can’t bank on looks alone to be a fashion icon. Fans thought he nailed it with this year’s Super Bowl costume: camo suit, with the jacket later replaced by a leather biker jacket. Between them, a bandanna, as well as a shirt with a wood/forest print featuring a couple of deer. I am not sure traipsing Yogi Bear land is fashion-smart.

This collaboration comes after last year’s, when the star and brand paired up for a customised Levi’s trucker to celebrate the jacket’s 50th anniversary. That followed with Levi’s designing some of the costumes of Mr Timberlake’s Man of the Woods tour. For their first capsule, out last week, Mr Timberlake takes to a theme that remains evocative of the name of his tour: “Fresh Leaves”. It appears to me that this would have been more interesting, even beautifully paired, if the collab was with Timberland. At least, it’ll sound good: Timberlake X Timberland, or vice versa. 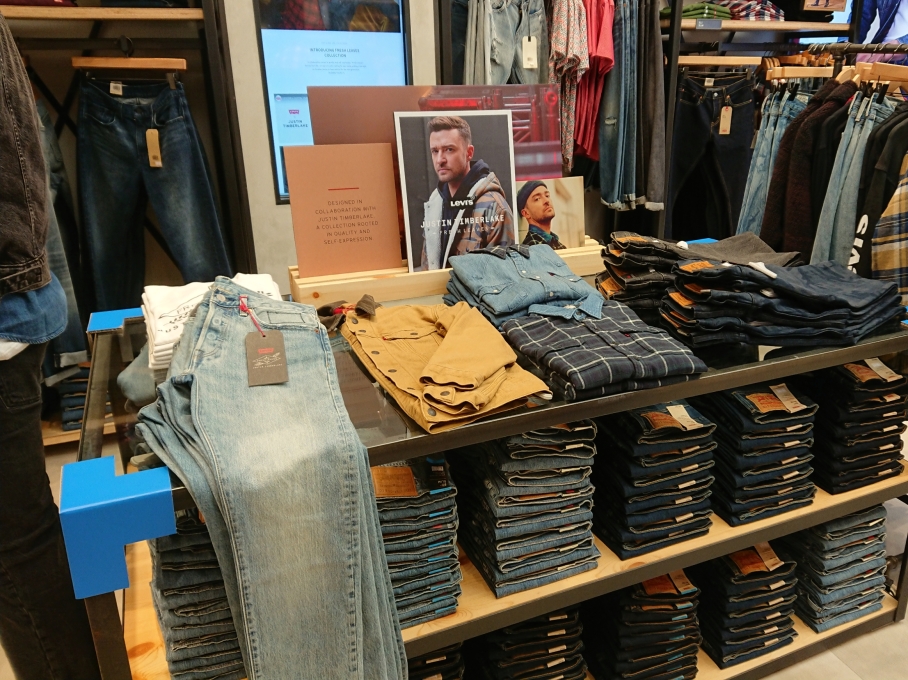 In-store, the collection does not really stand out. Photo: Zhao Xiangji

The 20-piece collection features what may be considered clothes fabulous for fishing or the rodeo, or for dressing during a holiday with cowboys. Levi’s calls them “a modern twist on classic styles that have defined a generation”, which could mean you are not going to get anything terribly new. For some, the familiarity of the clothes may be appealing—comforting-as-apple-pie even, but if you don’t take your style cues from Malboro Man (quaint, I admit), this may be another country for you.

Because it’s Levi’s, there is the expected 501, now cut leaner to yield the 501 Slim Taper (apparently based on how Mr Timberlake wears his) and the Trucker, now given the ‘sherpa’ treatment and sporting laser-rendered camo print. Between them, denim shirts and the flannel variety (inexplicably, I’m thinking of hay!), and the obligatory T-shirt and hooded sweatshirt complete the look. Maybe Justin Timberlake, too, is helping make America great again.

One thought on “Levi’s: Justin’s Take”