Rihanna’s thin lines as brows are so rarely seen these days that even the major dailies are talking about them. But elsewhere, another woman too had her brows considerably narrowed and raised… rather earlier 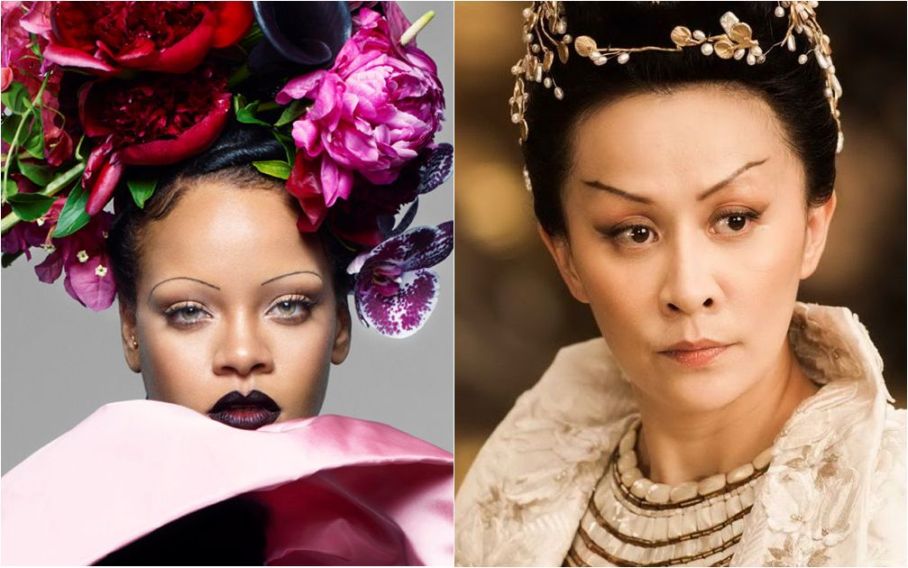 Rihanna sure knows how to make the news. It’s not good enough that she lands herself on the cover of British Vogue—September issue no less, she has to make a statement with her eyebrows. Or, those ridges exposed by the fine-line arcs above, and made more pronounced by makeup known as highlights. The thin curves of brow—drawings rather than actual hair—are slightly more refined than the markings plastic surgeons make before facial reconstruction surgery. You need to have some pluck to be so plucked, but when it comes to fashion, we know Rihanna has always been plucky.

By contrast, on another continent, Carina Lau’s thin eyebrows are a tad more brow-like if only because hers are a hair-width thicker (or was it because of the unsteady hand of the makeup artist?). Playing a power-threatened Empress Wu in Tsui Hark’s third Detective Dee film, The four Heavenly Kings (狄仁杰之四大天王), Ms Lau goes through anger fits, augmented by considerable camp, only to raise the already high, penciled lines even higher. In fact, predating—in more ways than one—Rihanna, Ms Lau was also cast as China’s only female emperor in the earlier Rise of the Sea Dragon (狄仁杰之神都龙王), and similarly with those fearful, elevated eyebrows. If God is a Woman, as Ariana Grande sings, would she have skinny eyebrows too?

In any case, these ultra-slender eyebrows are really not new. For those old enough, they will remember, if not their mother, or an aunt or two, certainly Angelica Houston and Faye Dunaway in the ’60s/70s, two actresses who knew how to work their brows to say don’t mess with me or come over here. Back then, their brows did not seem to lack denseness. In fact, the thin lines were considered feminine. If you are older still, there were the tweezer-dependent Clara Bows and Greta Garbo, but who’s looking that far back these days? After the bushiness of those on Brook Shields, which came very much face-to-face through the covers of American Vogue in the ’80s, women could not return to eyebrow width that’s equivalent to an actual strand of hair, to the point that tattooing is now a common permanent solution for those who are not able to be defined above the eye.

If you look at the Rihanna cover closely—and it tempts examination, there’s something almost comic about the cosmetic composition. The eyebrows are so thin and arced (and sit so high up towards the hairline) that they seem to be a take on those typical of the characters of Japanese illustrator Makoto (sometimes spelled Macoto) Takahashi. Mr Takahashi’s dreamy portraits are likely unfamiliar to the Adobe Illustrator Draw set, but for those who had used Colleen coloured pencils in their school days, these damsels with perfectly circular eyes and those penciled brows would be an evocative amble down memory lane.

Colleen coloured pencils are no longer distinctively presented as before and the cases do not bear those illustrations synonymous with the Colleen Pencil Company when it was a Japanese business. Some time in the ’80s, the manufacturer went bust. In 1989, Colleen re-established itself as a Thai enterprise based just outside Bangkok. Even if Mr Takahashi’s illustrations were to be revived (these days, more likely to appear are cuter characters such as those of Little Twin Stars), it is doubtful any Millennial will decamp the thick-brow stronghold fronted by Clara Delevingne.

The thing about ultra-thin brows is that significant tweezing is required and near, if not complete, bareness is to be expected. For many woman, plucking a large swath of eyebrow is tantamount to cutting long hair short: it’s unthinkable or difficult to stomach, and can drive some to tears. Rihanna may be considered today’s eyebrow trendsetter, but she may not wield much influence if thin-line eyebrows do not draw adopters in numbers large enough to be considered a trend. The proclamations of Vogue, as we know, have considerably less impact on modern lives these days. It is indeed doubtful if thin can really be in again.