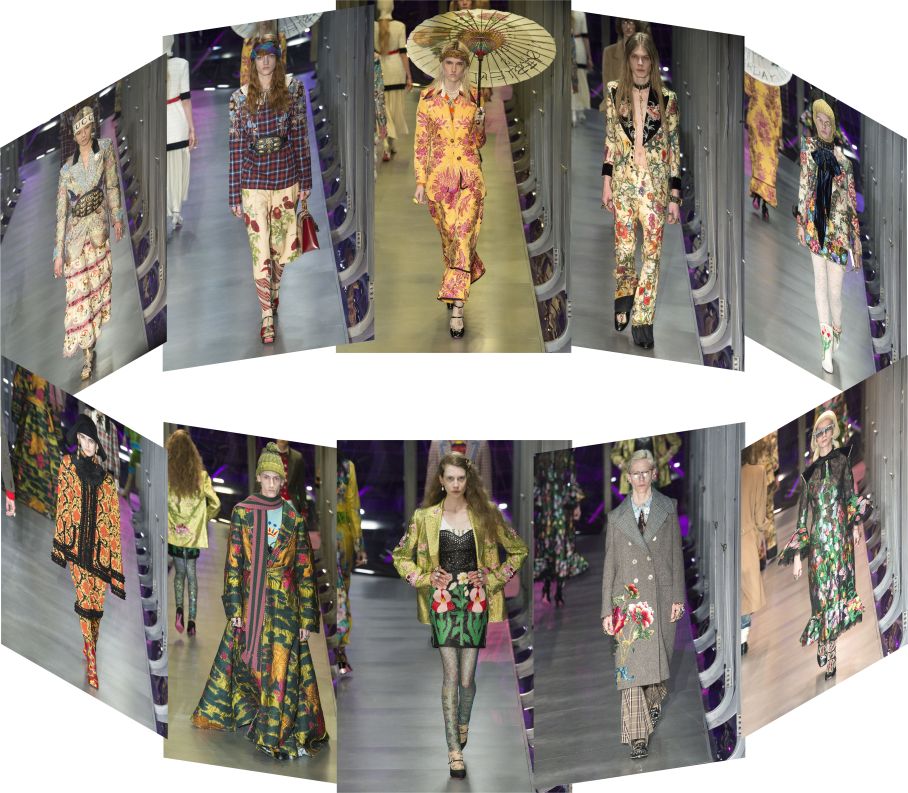 Can you tell the difference between last season’s Gucci and the current’s? And can you tell the difference between this season Gucci’s and the just-shown autumn/winter 2017 collection? No? Ah, you see… that is the point! As Alessandro Michele told Sarah Mower, there’s no need to “tell a new fashion story” each season. Repetition is the new black. Continuity is the new norm.

This is what the SBS Transit calls a loop service. From the start of his tenure, Mr Michele has placed us in a circle line—a carousel, if you will. Each look, right up to the current Milan Fashion Week collection, brings us back to where it all started: in the fall of 2015. And just in case you could tell that the trompe-l’œil sequined bows are replicates or the maxi-dresses reiterations, the models this time are placed at a distance from the audience, in a glass (or maybe acrylic) tunnel, a la Charles de Gaulle airport’s see-through tubes-as-escalators. Did the fish-bowl effect change things? 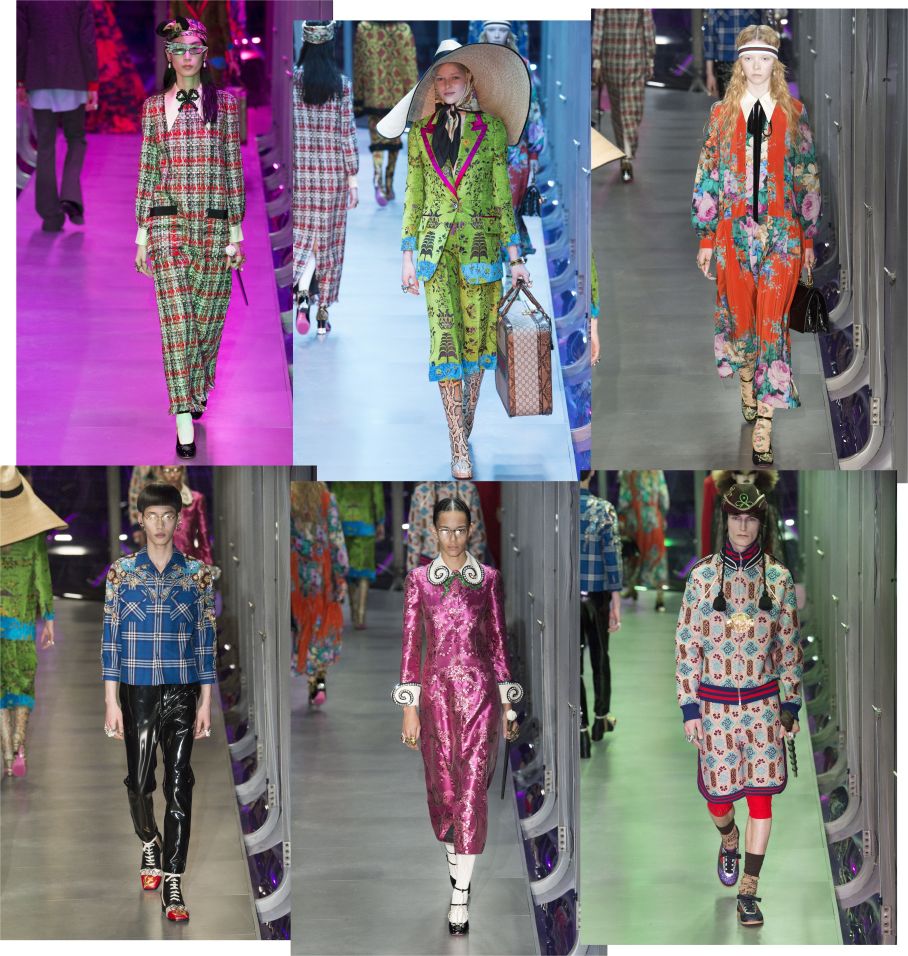 The staging may be different, but it’s the repetitiveness in the clothes that spells out sameness, so much so that we have run out of things to say about Gucci. Really. We tried. Eclectic came to mind, but that is a lazy description. There’s so much going on in just one look, on one garment that Mr Michelle deserves better. How about cartoonish and freaky? Or overwrought and florid? Or psychedelic and manic? How about xiao ting tong?

Has minimalism had such a long reign that this is payback time for all-out-max? We have nothing against ornamentation and flamboyance (and don’t tell us Gucci isn’t flamboyant!), but must fancy, flowery, and fussy go together in the same way that it was so prominently introduced to us two years ago? After four collections (excluding the pre-seasons), is this much all that Mr Michele can express? Are we still amused, the way so many fashion editors pretend that they are? 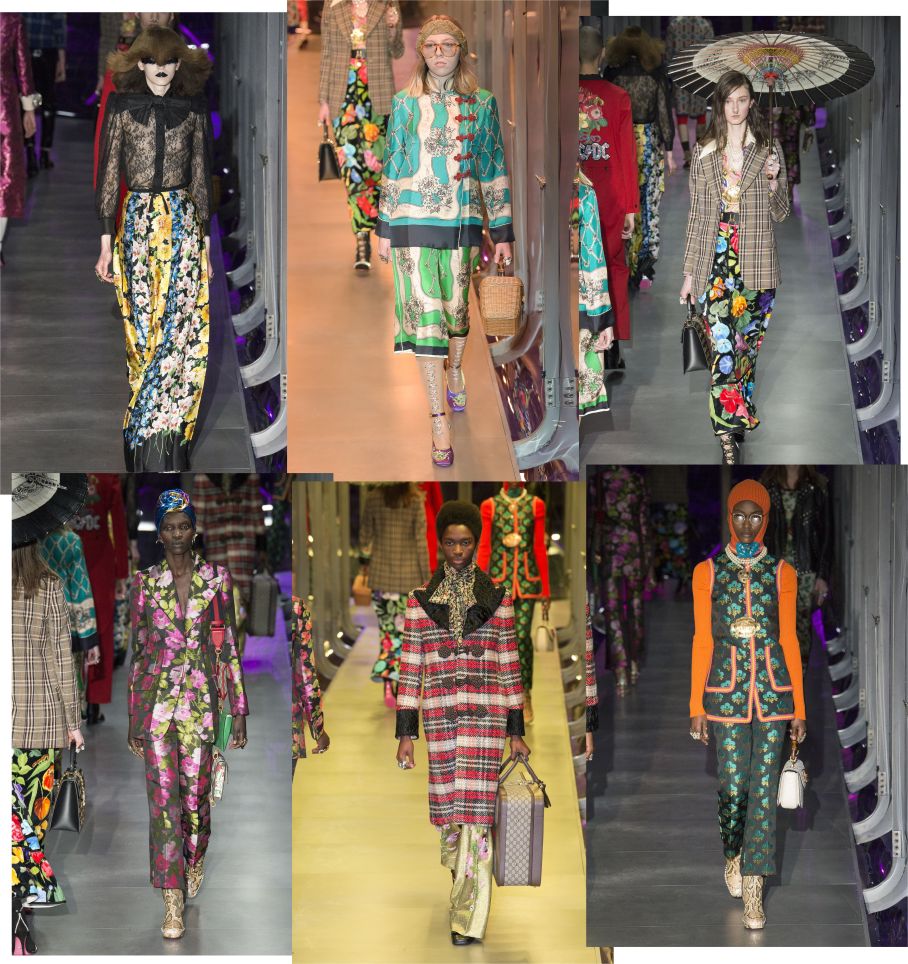 It is already appreciated that Mr Michele has given a fashion voice to red light district workers, their pimps, librarians, perpetual hippies, figure skaters, attention seekers, the Tenebaums, the MacDougals, magpies, tuhaos, geeks, nerdettes, the Carrie Whites of the world. Yet, it seems he’s still talking to this group, unable (or unwilling?) to re-draw borders. How many flouncy maxi-dresses does a woman need in her wardrobe if her life isn’t an all-day, all-night carnival, or Rachel Zoe on the job?

Sure, there’s the craft, embroideries, sequins, appliqués: stuff that involves handwork, all beautifully assembled. They come together in what Mr Michele calls alchemy, which could be euphemism for mad mix. Looking at a Gucci garment is like peering into a kaleidoscope for too long—it induces a headache. The first few pieces may be pretty, but they are ultimately bu nai kan (不耐看), as the Chinese would say, or unable to withstand long and careful appreciation.