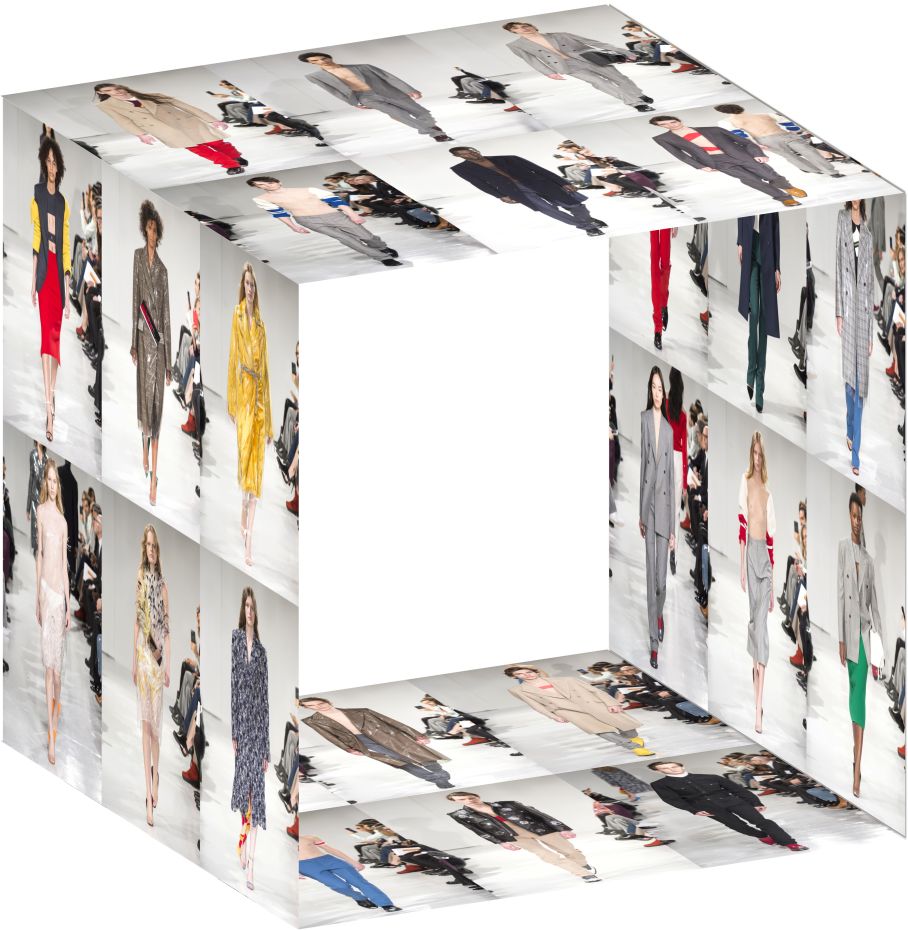 This is not the first time Raf Simons designs for other houses. His debut at Jil Sander in 2005 and then at Christian Dior in 2012 had one thing in common: a breathtaking first showing. We’ve waited with bated breath (again) for this collection since the first discreet announcement last year that Mr Simons would be holding the creative reins at Calvin Klein. Is his first with an American house any good?

Fashion in America is in a strange place. Across categories and price points, American labels seem to be struggling with sales and identity, as much as a consumer base that seems less interested in what dressing the American way means—a la Gap and co. Yes, denim is still popular, so are T-shirts, but less so for chinos (for now, brands such as Save Khaki United is in a tricky position). Or the sportswear that American designers so gladly and proudly base their brand DNA on. When was the last time you rushed out to buy an American label?

Over there (and over here), it’s not just a changing fashion culture, but a shifting visual culture too. America today is a picture of extreme casualness. Its people—born in the land or elsewhere—do not want to look as formal as they once did, when both men and women wore suits to work and for social occasions. There’s also less a need to show the world that you’re moving upward by wearing what is perceived to be expensive clothes, such as a suit. Or even a suit jacket. 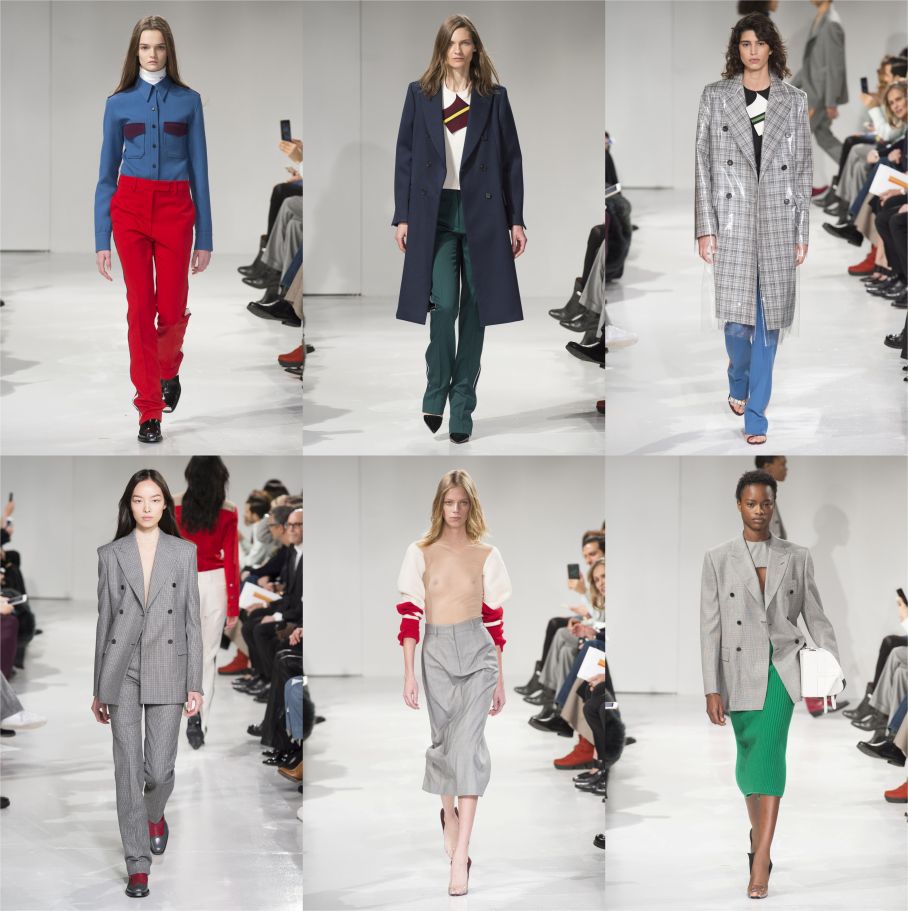 The Calvin Klein that Raf Simons seeks to remake does not seem to reflect these not-necessarily-just-in-America cultural changes. With so many suits on show—and the more difficult-to-wear double-breasted—one wonders if Mr Simons has dreamed up a more romantic, bygone vision of America, or a European’s image of the land of the free. In his show notes, Mr Simons says “It’s the future, the past, Art Deco, the city, the American West… all of these things and none of these things. Not one era, not one thing, not one look. It is the coming together of different characters and different individuals, just like America itself. It is the unique beauty and emotion of America.” Could that be what Cole Porter once wrote, “Anything Goes”?

This debut isn’t quite like his past debuts; it did not inspire gushing admiration. Could there have been too many first presentations? Or have we become a tad too familiar, hence bored, with the by-now-ever-present Raf Simons codes that were once unanticipated at Jill Sander and refreshing at Dior? Did we expect too much?

To be fair, Calvin Klein isn’t a house with a full set of recognizable design ideas that can be mined. Tracing his inspiration to “the city, the American West” is possibly Mr Simons’s way of not depending on what is non-existent. Indeed, how many designer label consumers today can say for certain what the Calvin Klein look is if you took away the denim jeans as well as underwear ads?

What’s surprising (striking to you?) at Raf Simons’s Calvin Klein is the conventional silhouettes. There isn’t, for example, the oversized proportion of the current collection for his eponymous label. Or, if you go further back, the ethereal yet structured dreaminess that set the mood for his re-awakening of Dior. At that time, his simple yet detailed forms made everyone else’s overwrought output looked somewhat dated.

At New York Fashion Week’s autumn/winter 2017 season, Mr Simons does not tease and simultaneously tempt the way he did in Paris five years ago. Perhaps, geographical difference and the geopolitical contrast between then and now demand a certain aesthetic that negates quirk and edge. There is also the possibility that one needs to keep to Calvin Klein’s entrenched “minimalism”—a post-Euro-minimalism branding of the ’90s that the label is still fixated with.

Don’t get us wrong. This is not a lacklustre collection. It’s got an energy that is not always present in the New York shows. And it is a lot more daring than the offerings of conventional New York labels. But it does not make one hunger and crave even when there are some pieces one does not mind owning. 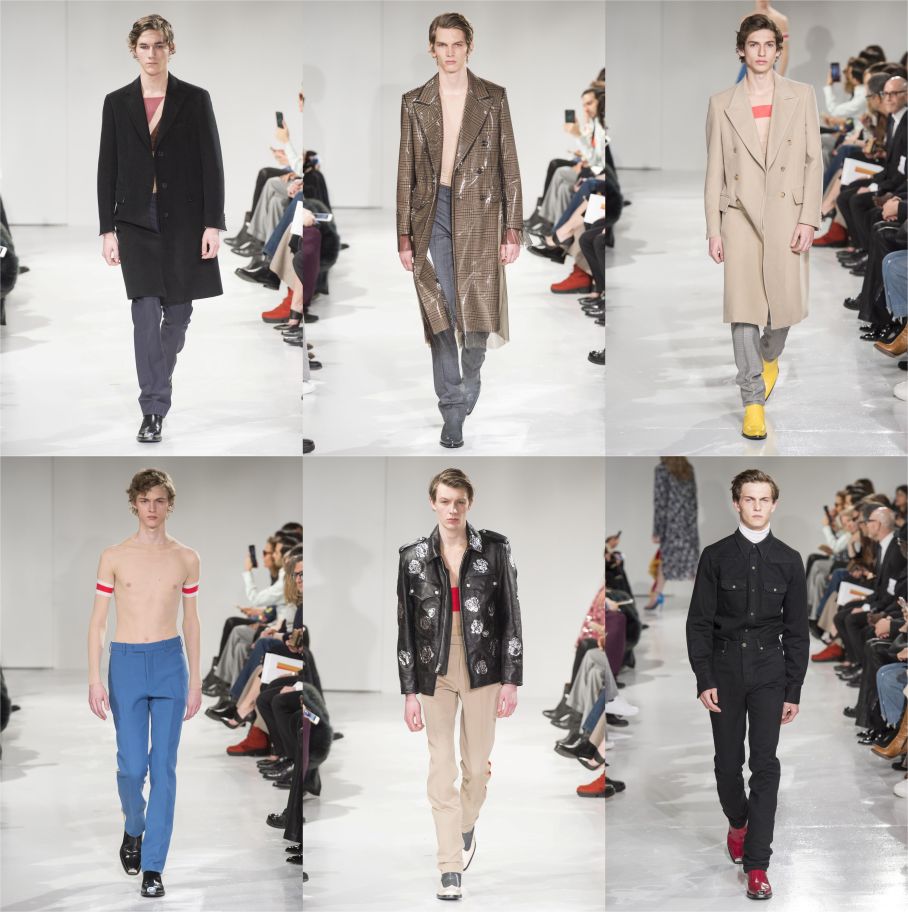 We like the woman’s blazer with what looks like engageante sleeves (which also appeared in the Raf Simons collection last month). That’s something rather incongruent with the Calvin Klein aesthetic—a detail more in sync with Mr Simons’s own inclination to deconstruct, and a colour paring (yellow and gray) that recall his bold use of brights.

That’s not the only sleeve that we find interesting. There’s the pullover with thick sleeves (that is reminiscent of varsity sweaters) attached to a sheer, skin-toned bodice. Versions for both men and women appear a few times on the catwalk. Although it’s unclear who might seriously be keen on such sheerness if they are not pop stars with the proclivity for such display, it is consistent with Mr Simons’s tendency to contrast textures and densities.

What’s also more the Belgian than the American founder of the label is the graphic elements: not only in terms of trims, but also in the details. A top with a cutaway at the left shoulder that is allowed to fold down across the upper chest to show its underside is appealing, but it brings to mind somewhat similar treatment seen in the Mr Simons’s Dior resort 2015 collection.

Surprising? Mr Simons has always reprised the woman’s suit silhouette that he dreamed up and perfected at Jil Sander (in particular, the proportion of the jacket to the pants), but he’s been able to tweak it at Dior so that the latter versions were truly sleek, youthful-looking, and, dare we say, sexy. Some quintessentially Raf Simons ideas are, therefore, expected at Calvin Klein—fans would be disappointed otherwise. But could these have been a little too obvious even amid the flourishes that are supposed to be American by genesis?

Whether Raf Simons is running out of steam is not yet a persuasive premise for the lack of wow at Calvin Klein, itself, like so many other brands of its peer, languishing too long in the powerlessness of moving forward. Perhaps Mr Simons is pandering to the long-held belief that American fashion, unlike European, isn’t quite the crucible of innovative, rule-breaking ideas. It is possible he is keeping to the standard that has made fashion in the US mostly looking across the oceans, but rarely leading.

The re-imagining of Calvin Klein by Raf Simon has shifted the focus to New York. Of course all eyes are now already on America—although for the wrong reasons. Calvin Klein was once considered a great American designer name. Whether Mr Simons can make Calvin Klein great again remains to be seen.