Two weeks ago, in London’s JD Sports on Oxford Street, an unprecedented scene was witness by a friend who was holidaying in the city. Unprecedented because he has not seen anything like this in Singapore. Perhaps, as he conceded, he has not been in the right place, at the right time. There, at one of London’s biggest sporting goods stores, a group of Asian shoppers (possibly tourists; Thais and Taiwanese among them) were crowding a wall of adidas Originals NMD sneakers. “Jostling” was how he described the bunch, and “not a Caucasian among them”.

Just outside that group, a saleswoman with a stack of immediately identifiable blue boxes (seven, according to him) beside her was shouting out shoe sizes with the desperate hope that whoever had asked for them would come forward to claim the prize. The responsive ones were quick to grab their object of desire. At that precise spot, they would immediately try on the shoes, either standing or squatting. “There was not a bench or even a stool around,” my friend revealed, with no attempt at concealing his disapproval. “You know, I refused to pay £120 for a pair of sneaks and to feel I was shopping in a pasar—and this was no Borough Market!”

Only yesterday, at Seek in Ion Orchard, I saw two guys asking for the NMD. I didn’t hear the first part of their request, but the sales guy’s response was audible: a vehement, nothing-more-to-say “sold out.” Will you be re-stocking, came the desperate rejoinder. “We don’t know. Adidas controls the releases. Our stock sold out within 30 minutes they were in the store.” So, it’s not available in Singapore, one of the shoppers plead-asked. “I don’t think you can find it anywhere here. Even if you were to buy at the Adidas shop, you would have to ballot for it first.”

At the time of this writing, the ballot is closed. The Adidas Singapore website was of no help: a line “There are no products matching the selection” was the response to an earlier search for the NMD.

One of the most sort-after the NMDs, the XR1 ‘Duck Camo’, released on Black Friday last year

Two days earlier, between 313@Sommerset and HMV on Grange Road, I saw a transaction between two fellows who looked like they would be sitting for their ‘A’ Levels this year. The object of the exchange was a pair that looked like an NMD XR1 in black. As soon as the recipient examined the shoes (that was when I saw them) and was satisfied with the pair, he handed cash to the seller, who, in the presence of pedestrians, immediately counted the notes: there were 11 pieces of fifty dollars. At online sneaker re-seller Saint Singapore, the cheapest pair of NMD is S$299 (the R1 Mesh Charcoal Grey), while the dearest, S$1,299 (R1 in collaboration with the street wear label Bape).

There’s no denying the NMD’s popularity. When you walk down any busy street and see a group of guys (women, too, in fact), chances are, you’ll see all of them in NMDs. Herd mentality of course, since many young consumers of sneakers approach the purchase of their on-trend pair the way many once grabbed the Stan Smith: ardently and indiscriminately. The NMD’s standing in today’s important kicks is further born out when Zara recently issued their version with nary an attempt to disguise it as anything else. Theirs came more than a year late, but who’s taking notes? 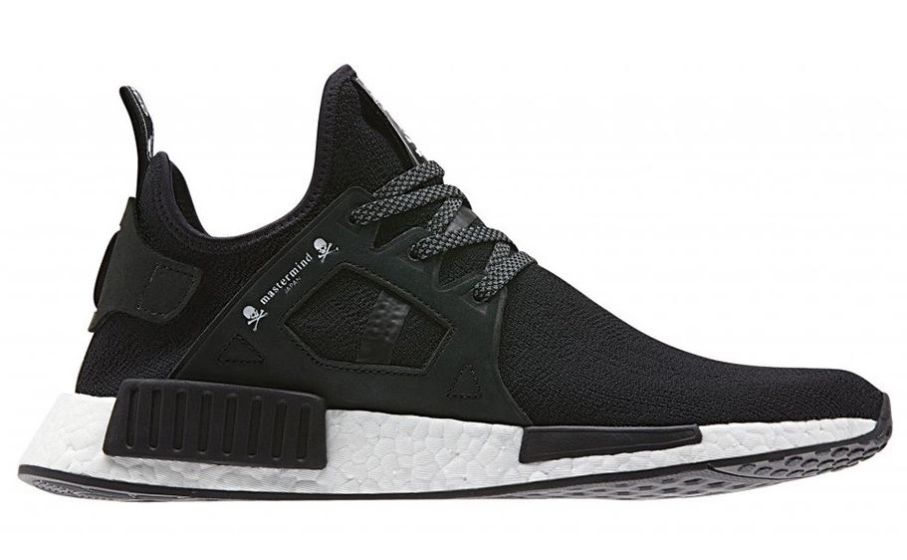 Totally high in demand (and sold-out) was the collaboration with Mastermind launched last year. On E-Bay, a pair can be had for as high as USD1,399

What’s with Asia’s obsession with the NMD? I am not really sure, just as I can’t be certain why so many on the continent are mad about Gucci’s appliquéd denim jackets, but I shall hazard a guess. The NMD is sort of a follow-up to the wildly successful Ultra Boost (and the cousin the Yeezy Boost), a new silhouette in 2015, when it was considered something different from Adidas in a long time. The NMD, according to media reports at the time it emerged, is based on three of the brand’s old-time sneaks: the Boston Super, the Micropacer, and the Rising Star. Just as one assumed a retro style will materialise, Adidas launched a slightly minimalist, not quite bombastic shoe that is not dripping with pre-disco-era styling.

The NMD—an abbreviation of ‘Nomad’ but no allusion to a really itinerant existence—is also not marketed as a serious sports shoe, cashing in on the fact that most of the sneakers we own have not been put through the rigours of court or track. It’s a light and airy shoe, which is more and more preferred than the clunk of, say, the Superstar. This is especially appealing in Southeast Asia where the weather has been more on the side of searing. In addition, as street style is the dominant force in today’s fashionscape, the NMD, particularly the blacks, appeal to those who are weaned on the likes of brands such as Off-White.

Another impossible-to-get style, the R1 conceived in collaboration with Bedwin & the Heartbreakers last year

Launched at the end of 2015, the NMD basically comes in two styles (if the less-seen City Sock version is not included) that are causing temperatures to rise and wallets to empty out: the R1 with the brand’s unmissable three stripes and the XR1 with the triangular frame on the side that holds the eyelets. The NMD is built on what Adidas calls Boost technology, essentially a micro-engineered sole that’s touted to be durable and shock resistant: a territory and look that the more critical could trace to Nike’s Roshe Run.

Personally, I prefer the XR1, maybe because of its lack of obvious parallel-lines branding. In fact, the all-black versions could be mistaken for pairs from a Y3 store. Sneakerheads are looking forward to the R2, the not-unexpected follow-up to what for some is the most successful sneaker style of 2016. I’m keen to see that version interpreted by White Mountaineering (first shown at the label’s SS 2017 show in Paris last June), more so after missing out on Masafumi Watanabe’s spiffy pin-stripe version for Bedwin & the Heartbreakers last year. The Japanese just know how to take something current and make it better.

One thought on “NMD Madness: Time To Forget The Stan Smith”