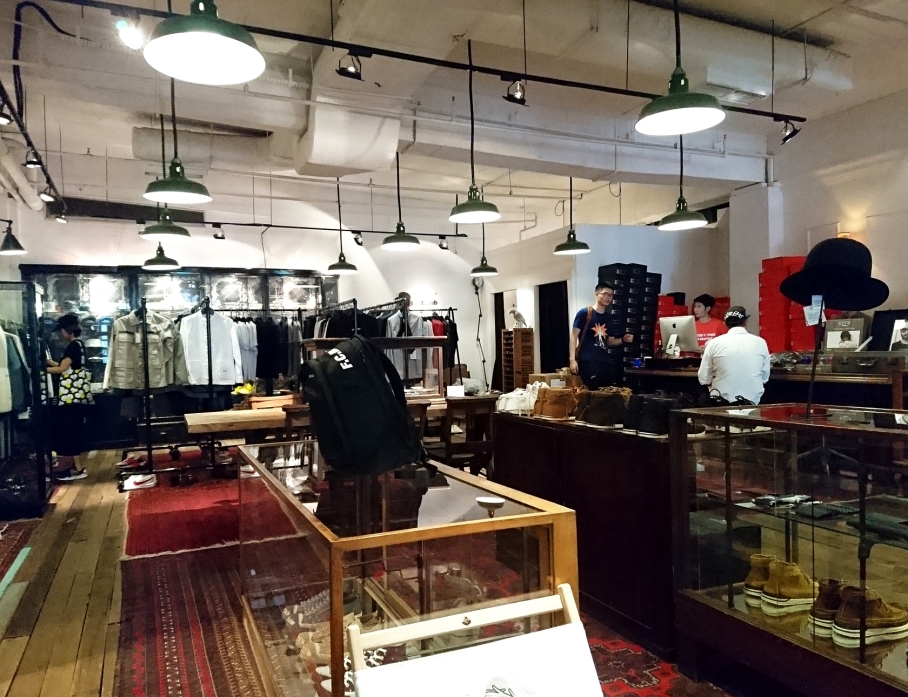 One of Singapore’s best men’s wear stores shall be no more. Surrender at Raffles Hotel Shopping Arcade will halt its operations next week, on 23 August, but its closure does not mark the complete end of Singapore’s pioneer men’s wear retailer. According to the company’s farewell message to customers, Surrender will morph into a new project, cryptically named #SRD268, at the end of the year.

It requires no special talent to guess that SRD is Surrender abbreviated, and 268—on Orchard Road—is where the new store will be situated. The Raymond Woo-designed building (unnamed, just 268 Orchard Road) that occupies the former Yen San Building site is already habitat to other brands under Surrender’s parent company D’League: namely Christian Dada and the soon-to-open Off-White by Virgil Abloh. It looks like #SRD268 shall complete the triumvirate that occupies the entire ground floor of the glass-and-steel building.

Surrender’s departure may perhaps signal the fading of fashion cred for Raffles Hotel Shopping Arcade, where the store has made the latter home for the past 6 years. The first men’s clothier with edge to open at Raffles Hotel’s retail wing, Surrender follows the steps of brands such as Prada, Louis Vuitton, APC, Visvim, and Front Row to depart what may be considered one of our city’s most atmospheric shopping destinations. Only L’Amoire now stands (without a fashion-strong neighbour), but for how long? 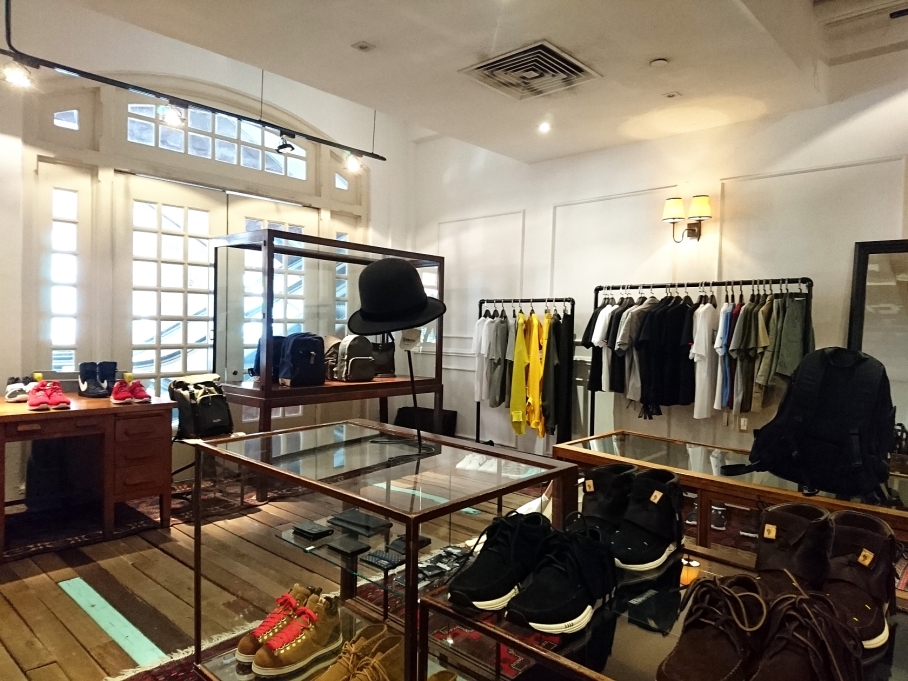 Surrender’s exit is, perhaps, to be expected. According to those who are familiar with the store’s operation team, the end of the lease was cited as reason, as well as the Arcade’s “slow traffic”. But some observers feel that it would serve Raffles Hotel’s or Qatari owner Katara Hospitality’s interest to retain long-time tenants such as Surrender. Others feel that Surrender should leave as Raffles Hotel Shopping Arcade has been in a dismal state for quite a while, with tenants complaining of poor upkeep.

Some Surrender customers have said that, for them, there’s no reason to visit the Arcade other than to go to their favourite store. Surrender, on level 2, is on the same floor as the Long Bar, where Raffles Hotel touts it as the birthplace of Singapore Sling. In the past year, it is only here that you’ll sense some buzz, as visitors experience what the hotel calls “one of the truest rites of passage of travel”—drinking the Singapore Sling and flinging peanut shells on the floor—grounds which the hotel proudly claims to be “the only place in Singapore where ‘littering’ is permitted.”

Surrender did not enjoy a location this posh when they started. Conceived by Earn Chen, the creative director of hospitality group Potato Head Folk, back in the ’90s, it began as a little skate-influenced fashion and footwear shop in Far East Plaza during a time when the mall had a vestige of cool, unlike now. Mr Chen, who, according to Apple Daily in 2014, was “seeing” the Hong Kong actress Cecilia Cheung, told the media that after a visit to New York City with friends, he was inspired by the “skateboarding, hip-hop, alternative lifestyle” scene there and decided to open a store that Singapore had not, until then, seen. And it was a store with a difference even when T-shirts and sneakers dominated. It was our first taste of refined and elevated urban style. 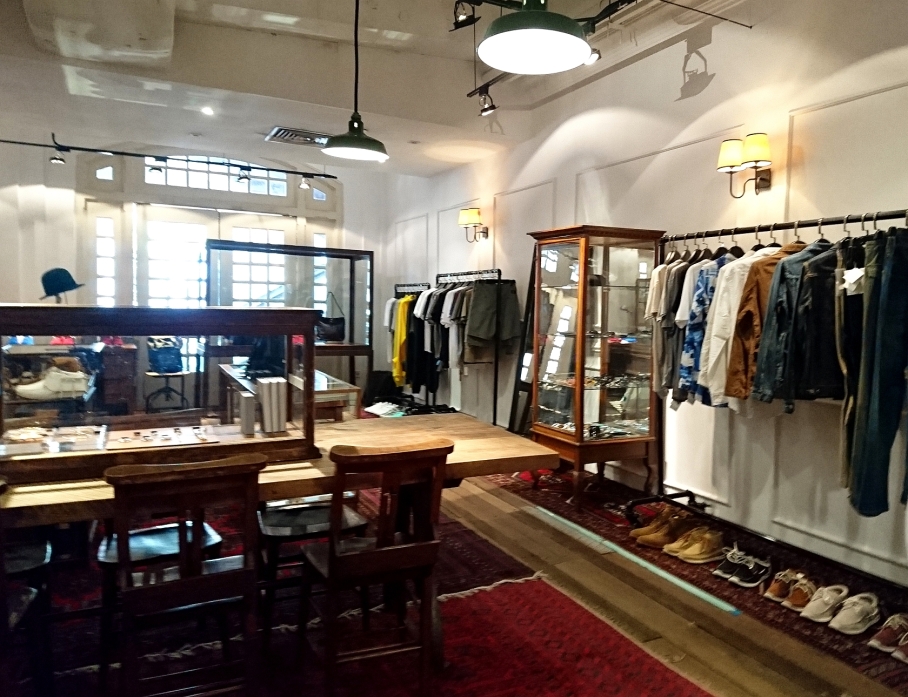 After Surrender moved out of Far East Plaza, it shifted into a shop-house unit on Devonshire Road before relocating in 2010 to Raffles Hotel Shopping Arcade, where it roosted for half-a-dozen years. It was here, during the Arcade’s grander days, that Surrender truly consolidated its standing as the premier men’s wear store with a difference. The store was eventually sold to Dave Tan, the man behind Richard Mille in Southeast Asia and D’League, and is managed by his 24-year-old son.

What makes Surrender unique in the men’s fashion retail scene here is the store’s merchandise mix—it is unabashedly skewed towards Japanese street wear. When once only an air ticket to Tokyo could connect you to brands such as Neighborhood, WTAPS, Uniform Experiment, Sophnet, and Bristol, Surrender was the vital outpost. And soon even more desirable brands joined the stable: Undercover, Nanamica, and Visvim (which, in 2012, briefly had its own free-standing store, also in the Raffles Hotel Shopping Arcade). When the American artisanal label Geoffrey B Small was added, Surrender’s standing scaled many rungs. All this in a vintage/work-room interior that has more in common with Tokyo retailers such as Journal Standard than the Euro-centric swank typical of our local high-end stores.

While Surrender’s street style strengthened, a pricier Salon by Surrender in The Shoppes at Marina Bay Sands opened in 2013 (after debuting in Shanghai at the Mario Botta-designed Twelve at Hengshan hotel a little earlier). Here, refined British labels such as Casely Hayford, luxury street-wear brands such as Hood by Air, and expensive sneakers such as those by Buscemi (“obnoxiously high quality goods”!) grabbed the attention of those willing to pay top dollar. The Japanese leaning of Surrender was not discernible. The Salon was, however, a few steps ahead of Surrender: it closed some months back.

It would seem Surrender is now returning to and concentrating its efforts on Orchard Road. According to the company, “project #SRD268, albeit aimed to encompass an entirely new distinct perspective on retail, fashion, lifestyle and art, will still stay firmly rooted in Surrender’s forward-thinking attitude.” Sources told us that some of the existing brands stocked at the Raffles Hotel Shopping Arcade store will be dropped. It is still hazy which will exit Singapore altogether. Still, hopeful are many that the new Surrender, even when abbreviated to letters and numbers, will not be short of those labels that make them give in to the store in the first place.

For a foretaste of #SRD268, visit its pop-up store at level 2, Mandarin Gallery. Photos: Galerie Gombak

One thought on “No White Flag Even When Surrendering To Closure”