I have been paying attention to winter wear these days because it seems to me that increasingly those who choose to holiday in colder climes fill their suitcases with kit from Uniqlo. Nothing wrong with that, of course: Uniqlo makes practical and functional winter clothes that are amazingly affordable. For basics such as their Heattech Innerwear, they’re hard to beat for wearability, comfort, and price. But sometimes, one does want to stay away from the obvious choices even if only to avoid the likelihood of sitting next to someone in the plane wearing the same pocketable Ultra Light Down Jacket.

My search in the past weeks has taken me to sportswear labels rather than fashion brands, and sometimes I encounter a meeting of the two. One of the most appealing is the collaboration of Japanese label Onitsuka Tiger and the Italian designer Andrea Pompilio. This isn’t their first partnership. In fact, the coming together of these two brands dates back to the spring/summer 2013 season. Hitherto, it has been the footwear that seems to be gaining attention and following. If only more shoppers take a step up and give the clothes a chance in the fitting room. 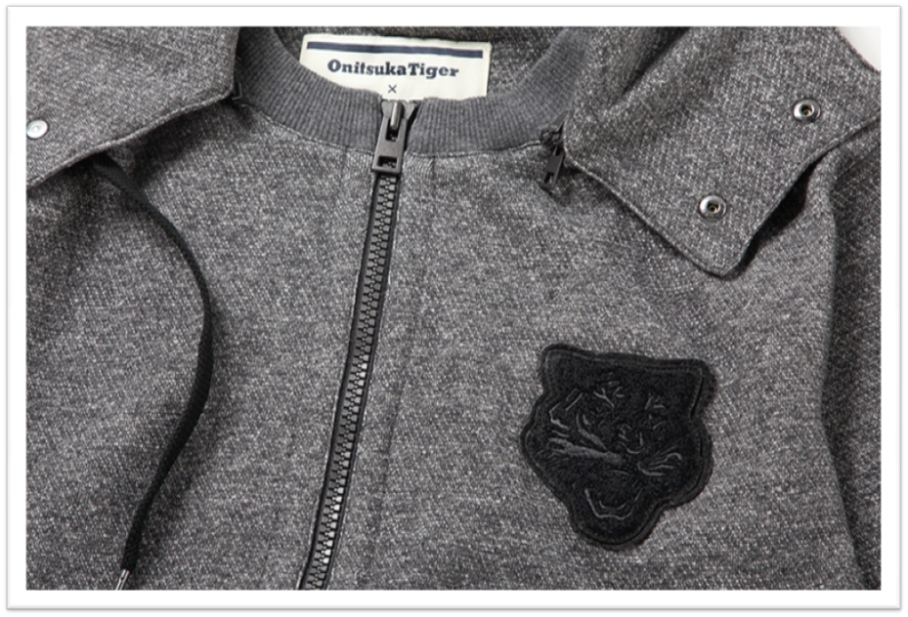 Closeup of the details of the ‘Sweat Zip Parka’

At the newly opened Onitsuka Tiger store in Suntec City, one item that caught my approving eye was the Sweat Zip Parka, an asking-to-be-cuddled outer that stands apart from the rest with its lower half of the right sleeve in a contrasting black, picking up from the same colour of the college crest in the shape of a tiger’s face. Upon closer examination, I realised that the hood can be unzipped to be removed. Underneath is a rather unusual ribbed crew neck that, when worn with a same-tone sweatshirt inside, will yield an athleisure twinset!

This does not appear to typify the Andrea Pompilio ready-to-wear line. The street vibe seems to take its cue from otaku culture. The collection (sadly there were no more than five styles available in the store for both men and women), in fact, wouldn’t be alien to those who throng Tokyo’s Akihabara. Perhaps Mr Pompilio is stretching himself so that he’s able to go beyond the aesthetic he has fine-tuned from those years with Prada and Calvin Klein. Sometimes, one has to explore the other side, dark or otherwise.