It comprises two cantilevered buildings astride Orchard Road, yet on both sides, the lower floors that form Orchard Gateway’s twin shopping centres look sandwiched. Each is a glass-and-steel sliver in parenthesis—so cramped that they’re deprived of a broad façade that runs alongside Orchard Road. In fact, Orchard Gateway’s newly-opened half (squeezed between Orchard Central and 313@Sommerset) is all rear. Just like a late-century Victorian bustle, its focal point is in the behind. But unlike the bustle, there’s not much to see—a butt that doesn’t beckon. Fortunately, in the narrow front, Orchard Gateway has Hong Kong’s renowned i.t noticeably flanking the right of the entrance, like a gleaming monocle.

Opened yesterday evening, the multi-label store i.t is one of those with ‘It’ written all over. There’s the striking store front, the retro-modern interiors, and the gathering of labels that has edge even when they’re not cutting-edge. Spread over three floors, the cheerful products (with upbeat messages such as ‘Life is Cool’) and displays that border on the cute are doubtlessly conceived for a young, easy-to-influence audience. Unabashed in its youth-oriented designs and marketing, i.t entices its customers with a motley selection of labels—mostly their own—that never lags with trends. Although not necessarily a pacesetter, the store does show the way sartorially, a task made easier with their pocket-friendly price points.

A late entrant in the fashion retail scene here, i.t is a “collaboration” with Wing Tai Retail, the company that brought TopShop and Uniqlo to our shores. The first i.t opened at Wisma Atria in June last year, and now there are three stores in Singapore; each based on a fine-tuned formula that is part pop, part sub-cultural. Between hardcore Goth-inspired looks and ultra-girly himegyaru-ish femininity, there is everything youngsters would need for their academic, early-professional, as well as Instagram-centred social lives. These are clothes and accessories that not only reach i.t’s core customers; they touch the young consumer’s parents too. In the fashion hybrid that has come to define i.t’s house brands (combining diverse and existing styles to create something vaguely new), nostalgia is not omitted, and it is this that sometimes tugs at the heartstrings of the older set. A look at the shoppers at A Bathing Ape spinoff Aape will bear this out: polo shirt with micro-prints is picked up by teenage sons while fathers choose a shirt of gingham with all-over camouflage print. Inadvertently or not, i.t has narrowed the age gap and broken down social hierarchies.

The i.t store is part of the I.T Group (full-cap and lower-case usages will be explained later in the article). The company’s beginning can be traced to Hong Kong, 1988, when founder Sham Kar Wai opened his first store. His story is one of many anecdotal and crazy successes that flourished in pre-1997 Hong Kong. Young and frustrated that in the Fragrant Harbour, accoutrements associated with rebellious British styles were severely lacking, Mr Sham decided to import those labels he was partial to for himself and his friends. The beginning was a tiny shop in Causeway Bay, where Doc Martens thick-soled shoes and European editions of Levi’s jeans captivated a post-adolescent, willing-to-experiment crowd. That soon led to one of Hong Kong’s most unforgettable fashion focal-points, the multi-label store Green Peace. 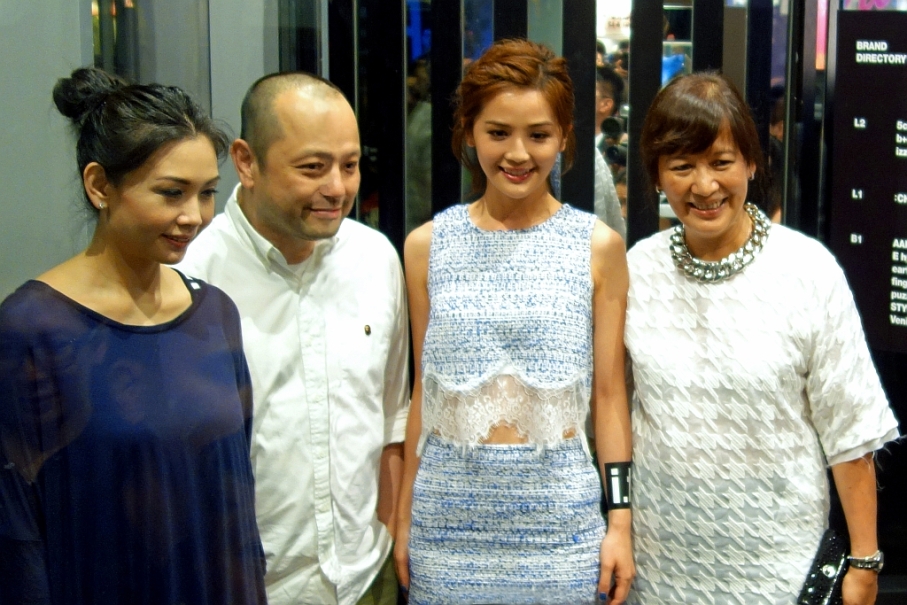 In the early Nineties, the city’s high-end fashion scene was dominated by the grande dame Joyce, a name not quite accurately described as the Club 21 of Hong Kong. Joyce, founded by industry veteran Joyce Ma, was many times bigger and bolder (in 2003, it became part of Lane Crawford Joyce Group, a piece of an empire of the Hong Kong real estate tycoon Peter Woo). In its home city alone, Joyce was one of Giorgio Armani’s three biggest global clients of the Nineties. At its peak, it was the go-to destination for top-tier designer labels, and was where the city’s prominent stars of the golden age of Cantopop—such as the now-gone Roman Tam, Lesley Cheung, and Anita Mui—regularly visited whenever their off-stage wardrobes needed updating.

Green Peace was then an upstart, but a player cool to the core. One of their most arresting shops was a second-story space inside a now-demolished red colonial building on Peking Road (former Chater Road) in the manic Tsim Sha Tsui. While Joyce was all sleek and impeccable, Green Peace was neo-bohemian—rather ironic, considering that Ms Ma then was a regular ashram goer and a meditation practitioner. His own punk leanings not rubbing off, Mr Sham’s Green Peace leaned towards an emerging trend for globalism in which cross-border fashion cultures were stirred in a happy mix. The Peking Road store was a marriage of souk-like interior and eclectic merchandising, drawing no distinction between high and low, with a merchandise narrative that was inter-textual. Labels as diverse as Romeo Gigli and Giuliano Fujiwara were arranged, not by brand, not by country of origin, but by looks or colours or product category, on ropes above floors laid with Middle-Eastern carpets. This was a treasure throve, and, like the one Aladdin discovered, was hard to resist. Hong Kong fashionistas quickly thronged it.

Green Peace, unfortunately, could not be Green Peace for long, not when the name clearly brought to mind a certain environmental movement rapidly gaining momentum throughout the world. It was surprising Mr Sham did not think of what might be perceived by the striking similarity. After 1997, the international organisation Greenpeace got their lawyers working on the case, and he had to drop the name. I.T was thus born, yielding, in no time, its multifarious fashion retail formats. In the beginning, the new moniker seemed unimaginative, and brought to mind another commonly bandied phrase, particularly among computer professionals. This time, however, something cleverer was at play, and it boils down to one dot.

The period between the two letters of its name is deceptively simple. As singular as the iPhone’s home button and as unobstructive as a washer under a head of a bolt, the divider allows I.T to be read as “eye-tee”. Place a full stop after the ‘T’ and you would have the abbreviation for Italy. Pair each letter with a dot on the right and they become initials for something that does not exist for the company. Deny them periods and they instantly say information technology (or, in lower case, the Internet domain name for where Prada and Gucci come from). Adopt upper-lower case, the brand may be mistaken as the title of Stephen King’s novel about “the evil without a name”. One small dot did make a huge difference. In Hong Kong, I.T is popularly known as big I.T (the upper case for up-market labels) and small i.t (the lower case for mass brands). There’s elegance in such simplicity and clarity.

Big or small, both concepts impacted Hong Kong’s fashion retail landscape dramatically, to the point where the I.T Group of stores—multi-branded and free-standing—could dominate the entire floor of a shopping centre or even a whole street. By the end of the Nineties, Sham Kar Wai was regarded as one of the most important figures in the Hong Kong fashion scene, and in 2012, was named by Forbes China as one of the top 25 most influential Chinese in global fashion. I.T stores popped up in mainland China (where apart from the usual I.T multi-label stores, a Beijing I.T Market opened in the capital, not unlike Comme des Garçons’s tri-city Dover Street Market), as well as in Taiwan, Bangkok, Malaysia, and, now, Singapore, prompting observers to see the Asian expansion as prelude to world dominance. For many Hongkongers, this isn’t hyperbolic, not after an i.t pop-up store appeared in London’s Selfridges in September last year, as well as a silver-themed I.T exhibition in Galeries Lafayette in Paris (Hong Kong and Beijing were also part of the three-city show) featuring more than 70 pieces of specially commissioned garments from 56 fashion brands such as Maison Martin Margiela and Gareth Pugh. These were part of I.T’s splashy 25th anniversary celebrations that brought considerable fame and pride to the SAR.

Much of I.T’s initial success, as the locals in Hong Kong are inclined to concur, could also be attributed to Mr Sham’s wife, the former actress Yau Suk Ching, whose vast network of celebrity and actor friends gave the power couple’s business added marketing heft. The opening of i.t at Orchard Gateway was cheered on, via video recordings, by such heavyweights as Shawn Yue, Nicholas Tse, Julian Cheung (all in surprisingly unremarkable clothes), and, in person, Charlene Choi, one half of the disbanded duo Twins.  Whether you consider celebrities the bellwether of style or not, they have tremendous, though not necessarily quantifiable, impact on young consumer choices. The owners of I.T use their access to star power to give their brands—even those as seemingly juvenile as the ones under the i.t umbrella—glamour and gravitas. 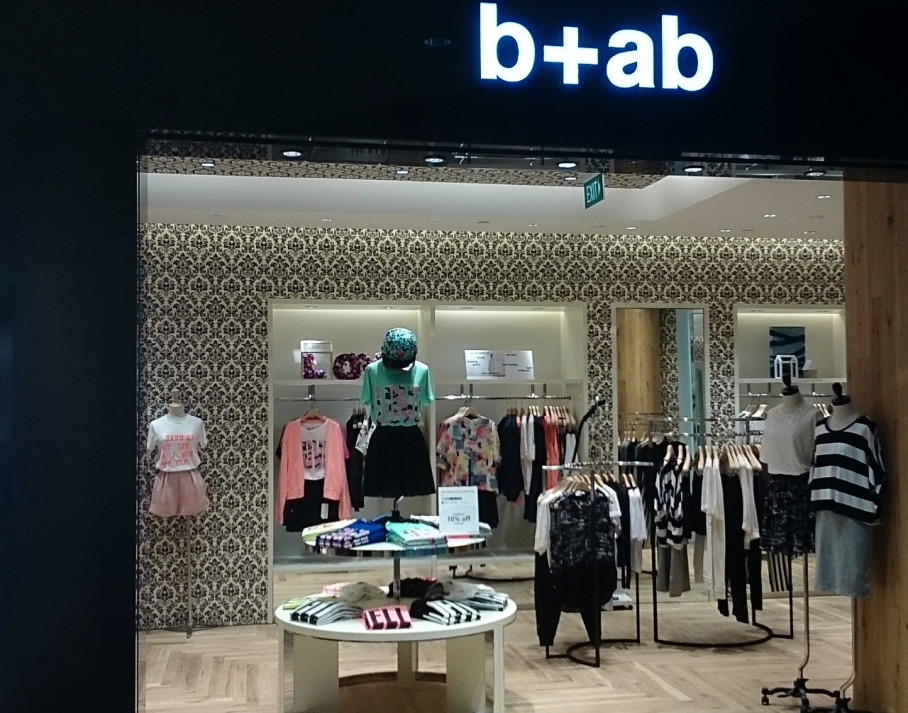 b+ab,  i.t’s earliest women’s wear line that does not pretend to be anything other than ultra-girly

Inside i.t at Orchard Gateway, half-a-dozen primary labels in their respective spaces tell their own brand story with a seductive allure not so different from what you may get at a candy store. While each projects a different image, ranging from the saccharine to the severe, the aesthetics do overlap. With such an affinity, they offer looks that are not drastically different from one another, varying only in degree of cuteness and edginess. Shoppers need not stick to one brand for their fashion needs as, collectively, i.t covers most of the street-style bases on which the average trend-led youngster stands. And they do it with such imperturbable cool that they attract only the quiet and distinctive labels to their fold. Case in point: the label Izzue’s successful collaboration with Japan’s urban wear brand du jour Neighbourhood.

At the Aape space on the basement level of the store (the I.T Group acquired 90% of Nowhere Corp, the parent company of A Bathing Ape, in 2011), a girl with a sanguine complexion was queuing quietly with her lanky boyfriend to pay for items the latter had picked. Between the two of them, incongruity was the central theme of their get-up: she in a floral tea dress under an extra-large pullover ripped at the neck and he in an oversized collegiate tee with skinny jeans in some Aztec print. They do not look out of place. “I like it here,” the girl said, “It’s cute.” The couple walked out, hand-in-hand, the guy holding an Aape paper bag and a circular black and white cushion bearing a stylised face of a primate.