Our city’s favourite designer went back to school 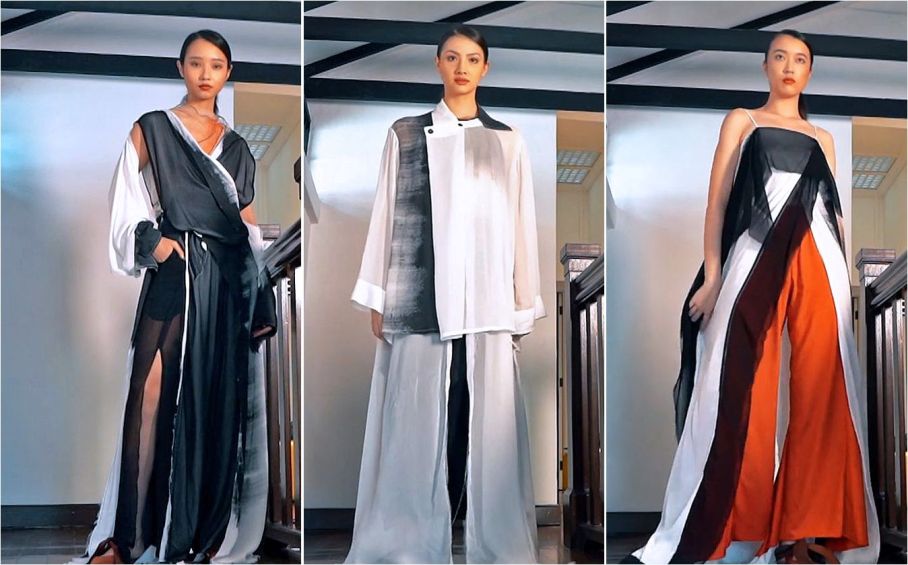 Hidden among this year’s graduate cohorts of the Nanyang Academy of Fine Arts’ (NAFA) Fashion Studies is Max Tan, one of the few homegrown designers operating under his own name. The casual observer may not, however, know that he is one of the graduates of the school’s Bachelor of Arts (Hons) program, jointly conducted with the University of East London, as Mr Tan has chosen to be identified by his Chinese mingzi, Tan Shu Lin (or, as it is also indicated, Chen Shulin). There is, of course, a small photograph to identify him, and, in addition, his drapey designs are unmistakable, but by name alone, he could have escaped recognition.

It is not known why Mr Tan has chosen to be somewhat anonymous in furthering his studies, but it is ironic that he goes by his Chinese name to graduate, as he has publicly stated that in his younger days, he felt aversion to what he was called. “Growing up, I hated my Chinese name (书林),” he posted on Instagram just last month. “I found it too effeminate sounding and I often get ridiculed for a feminine boy with a girly name.” The teasing during his childhood is, without doubt, cruel and the impact—psychologically and emotionally—seems to be protracted. At the end of the IG post, he did admit to reconciling himself to the moniker his parent gave him: “ I’ve learnt to accept myself and my name.”

Dropping his professional name (it is not known if Max is a legal name; i.e. appears in his I/C) to pursue a degree is unnecessary as academic excellence is not tethered to the words by which a person is known. Interestingly, his course mate is Mediacorp’s “principal image stylist/designer” Annie Chua Yi Jun (蔡宜君, an undeniably masculine identifier). She graduated in the same degree program with her full name. Both Mr Tan and Ms Chua enjoy a media profile that can be considered to be high (Ms Chua is a multiple award winner solely under her employer Mediacorp. Conversely, Mr Tan has received regional awards), and the attendant public scrutiny, or curiosity, is regrettably unavoidable.

Advancing one’s knowledge and skills through study is, from time immemorial, a respectable enterprise, and, in the case of Max Tan, commensurate with the shu (书 or book) in his Chinese name, a word evocative of the Book of History (书经, shujing), one of the (Four Books and) Five Classics of Confucianism (四书五经), as well as Chinese calligraphy (书写, shuxie), and the exalted title, scholar (书生, shusheng). With such erudite associations, there is much Mr Tan can be proud of.

What is more interesting is whether study—specifically the applying of one’s mind to the acquisition of knowledge—can result in better designs. Mr Tan launched his eponymous label in 2010, merely four years after graduating from NAFA with a diploma in fashion design, simultaneously winning the accolade Best Graduate. He later taught pattern-making at the school. For much of the decade as a full-fledged designer, he is considered to be an avant-gardist. To be sure, his designs can be broadly categorised as ‘experimental’, but we couldn’t be certain that avant-garde wasn’t euphemism for flawed. Graduating again a decade later, can he offer something improved from his formative years? Could refinement be stitched into his work? Can ‘designer’ be discerned?

After a close look, little seems to have changed. Mr Tan is no doubt an ideas-driven designer, but the execution and the finishing have always been wanting in finesse. It is possible that Mr Tan’s professional set-up lacks a garment technician to ensure consistency in the finish of the retail pieces, but for a collection that is less than half a dozen, created to be exemplars that benefitted from design school instruction, the refinement struggles to surface. It is not easy to make out if the BA capsule reflects learning and longing—to yearn for betterment, or just the completion of course requirement. Whatever was taught, and presumably grasped, does not transmute into extraordinarily fineness. Does his high concepts become, in the end result, a tad muddled?

As it turns out, Mr Tan’ graduate five-piece is titled Muddled Collection Season. According to his mood board, inspiration came from 99-year-old Singaporean artist Lim Tze Peng’s (林子平) self-conceived Muddled Writing (糊涂字 or hutuzi). Winner of the Cultural Medallion for Art in 2003, Mr Lim is noted for his work in ink—calligraphic typography that is stylistically so unlike the more graceful work of traditional calligraphers that he described them as “muddled”, which Mr Tan inexplicably (or mistakenly?) also called “Nanyang style”, an aesthetical uniqueness mostly associated with artistes linked to his alma mater NAFA. However long we looked at the clothes, it was impossible to connect the dots.

Rather, the output bears an uncanny resemblance to the costume designs of Chen Minzheng (陈敏正) for Zhang Yimou’s (张艺谋) 2018 period piece Shadow (影子, a winner for Best Costume at the 55th Golden Horse Awards). There is the black brush strokes (more painterly than calligraphic), as well as the languid, vertically-linear shapes, rendered in ascetic monochrome. Characteristic of Mr Tan’s past output are the too-long proportions—and their raw edges—even when he has now supplanted humongous shapes with a silhouette that is softer and flows more naturally. Mr Tan, who still “experiments with quirk (sic) cuts”, seems, for now, to be fascinated with flat lengths of cloths, effecting an assemblage of oblongs.

Everything flows—or gapes—as they do until suddenly a pair of orange trousers appears, peeking from behind flowy door-curtain (门帘) panels that emerge from the bust. What caught the eye is the elasticised waist. Did the designer buy this at Uniqlo, where their Relaco line is extremely popular, especially now, when lounge wear is gaining traction? That really sticks out—an erroneous detail that derails our search for the thoughtful, the special, the refined. Max Tan may have graduated from tertiary education, but we still keenly wait for him to scale from rough-cut to exquisite.