Do we really need fashion entertainment when staying at home? CR Fashion Runway just told us we do. Or is it a narcissistic exercise by a selected few for the not-select many?

Models applauding their own ‘runway’ performance

Being by oneself is so undesirable and unbearable during what Pierre Png calls on television “these trying times” that we seem to be in a state of desperation. The stay-home order across the world has been so hard to endure and detrimental to persons or families alone that people want to break free like caged animals. Home may be where the heart is, but it isn’t where fun and gratification reside. People need to be—must be—entertained, more so the confined. Survival is not part of the equation, entertainment is. Our digital life is characteristically one huge orgy of providing and being provided with all that amuses us or deems enjoyable. This has become, online or offline, instinctive need. Self-isolation has only amplified our requirement for entertainment, however unimportant, however stupid or banal.

CR Runway with amfAR Against COVID-19 Fashion Unites broadcast on YouTube earlier taps into this beastly desire. Touted as YouTube’s first fashion runway show, the digitally stitched up video of models sashaying in their homes (or surroundings) is spearheaded by Carine Roitfeld. After leaving her job at French Vogue in 2011, Ms Roitfeld has been re-inventing herself, with varying degrees of success. Her unimaginatively named CR Fashion Book, from which this show draws its title, is an attempt to keep her finger in the publishing pie and, at the same time—with publisher Stephen Gan—create an overly-thick title that merely crawls in the shadows of Mr Gan’s far artier Visionaire (now folded) and fashion heavyweight Italian Vogue (the partnership with Mr Gan ended in 2016). CR the runway, just as with the magazine, is ensnared in a fashion rut.

To borrow from a popular quarantine activity, half-baked is how this YouTube show appeared to me. Now that live fashion shows can be watched on video streaming’s favourite platform, as well as on not-video-centric sites such as Twitter and Instagram, any event titled as “runway” or, as host, YouTube’s head of fashion and beauty, Derek Blasberg called it, “a high fashion runway show entirely from home… essentially supermodels supporting superheroes (medical and front-line staff)”, needs to appear at least delightful. On the surface, it sounds glamourous, but when the show began, it streamed like other society-rousing, social-message patchwork, broadcast to galvanise the grassroots into action or support, now popular online. This was, at best, talk-show savvy. “Many of the beloved faces from the world of fashion” can’t save it from being what might be seen on The Wendy Williams Show.

CR Runway is a fashion effort not for a fashion audience. This is not even targeted at the Victoria’s Secret Show crowd. A crisis can spawn both the critical and inconsequential. CR Runway, also a charity effort, falls with the latter. Its pedestrian presentation and a perfunctory use of technology won’t do anything for the image of fashion, already considered out of touch and in dire need of hitting the reset button. I am not sure what Ms Roitfeld hopes to achieve with this lacklustre reveal. To be fair, she did not claim credit for the idea. She attributed the fashion show to her son Vladimir Restoin Roitfeld, president of the company that publishes the magazine with his mother’s initials on it. This, as it turned out, was a family affair—his sister Julia walked the “runway” too. 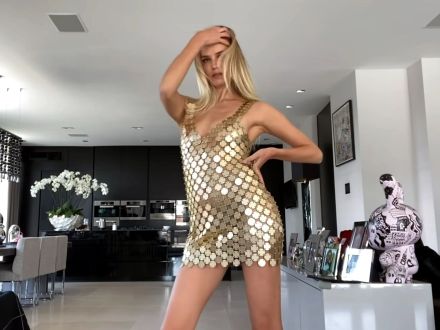 CR Runway was not, of course, a catwalk in the traditional sense. It was more playtime than showtime, girls having fun than at work. Confined at home, the models were only mimicking what so many others have been already doing when bored and the fashion bug bit. After watching the ridiculously lengthy show, I found The Pillow Challenge oddly more compelling. Irreverence, wit, and irony were not choreographed into CR Runway, nor fashion. The nugatory quality of the show and the ensuing blandness was assured when, out of the roughly half-an-hour broadcast, 17 minutes were used up for mutual admiration and expression of gratitude among its participants. Tiresome bunkum! Each frame was so unimaginatively filmed that I wondered why the CR brand needed to be stitched to it. Even Carine Roitfeld, a stylist of some repute, could not light herself well enough to look the fashion doyenne she is supposed to be. Whatever it was that the show attempted to communicate, the approach was very IG, very influencer with a smartphone, very shoot-your-next-campaign-via-Zoom.

Now that models and, indeed, modelling have been demystified, what is there about models even at home, that is fascinating to watch? Worse, when un-styled and un-directed? We now learn and can ascertain that models away from an actual runway, without the hands that make them, well, models, are just like most girls who follow them: They dress similarly (so what if the models wore their own designer togs), they can’t do their hair, and—believe it—not even their own make-up. The collective sigh among fashion folks: “Even a nearly-bare face does not have be a I-just-woke-up look!” To be sure, everyone working in the front line against COVID-19 deserves support and encouragement. Would it not be more convincing and moving if models were in the act of actually doing something for those workers. Surely that would play down the belief that the fashion industry is predictably self-absorbed and self-indulgent?