A Burberry rose or a Vogue rose? As a bloom of un-gloom, both are shown to look—or smell?—as sweet, during a time when the whiff of adversity is ever present, even where the roses grow 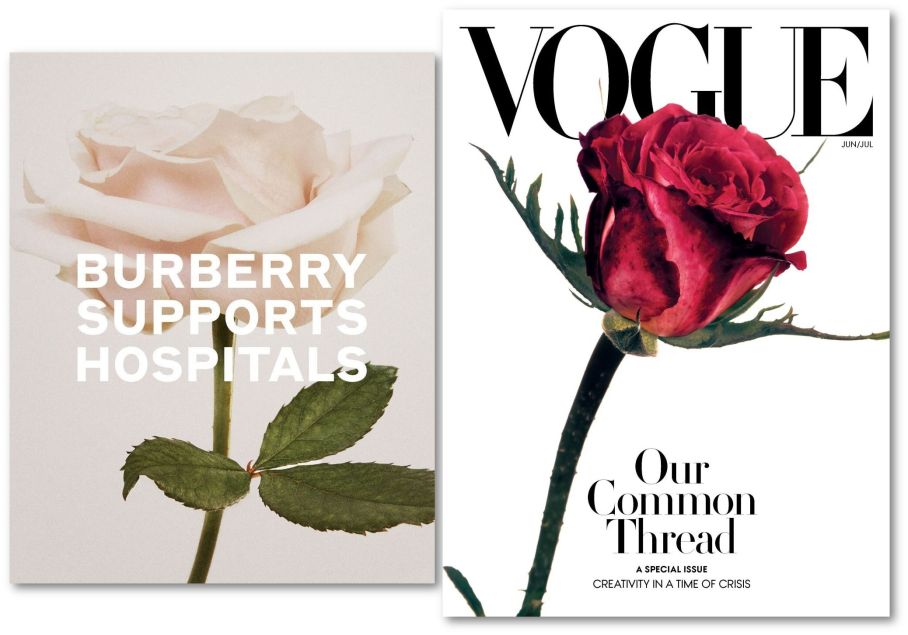 Valentine’s Day is over, yet the rose is still visible as a heart-tugging communicator. A single stalk, shy of a full bloom, spiky leaves not stripped, centrally placed—the rose is now fashion’s pick to symbolise optimism at a time not many in the industry are optimistic about. Or, is it perhaps spotlighting the troubles of flower growers everywhere or what Bloomberg in a headline two weeks ago called “the crash of the $8.5 billion global flower trade”?

Fashion and flowers are often intertwined, the former often inspired by the latter, especially during the spring/summer season. Unless you’re Miranda Priestly—“Florals? For spring? Groundbreaking”. Announcing their support for medical staff on social media, Burberry used a white-pink rose that looks to be of English provenance as floral mascot. “Burberry Supports…” series of communication material puts the spotlight on what the company is doing for the community and hospitals. The rose it chose, suggestive of purity, innocence, and youth in its colour, is for now bleached of its bridal associations.

As stated in its corporate message, Burberry is “repurposing our trench coat factory in Castleford, Yorkshire, to make non-surgical gowns and masks for patients in UK hospitals”. In addition, the company is tapping into its global reach and resources “to fast track the delivery of 100,000 surgical masks to the UK National Health Service for use by medical staff”, as well as funding research into the development of a vaccine, and donating to charities with the main mission of addressing food poverty throughout the UK. How this is best represented by the rose isn’t clear, nor is an explanation offered. Can the rose, with all its romantic associations, negate Britain’s beleaguered start at mitigating the spread of COVID-19?

Across the pond at American Vogue, a red rose is the cover subject, an inanimate—although living—object not usually associated with Anna Wintour’s beloved title (curiously, under the masthead on the right, the text reads Jun/Jul—two issues in one?). The red rose is considered a universal, although cliched, symbol of love. If Andre Leon Talley, in his publicity rounds to promote his new autobiography The Chiffon Trenches: A Memoir, is to be believed, love and the editor of American Vogue are not quite a twosome—Ms Wintour, he writes, is “not capable” of “human kindness.” That might sound like the reaction of a person scorned, but the charge clearly equals not a flower that evokes deep affection.

According to Condé Nast’s head creative director Raul Martine, Vogue’s cover bloom symbolises “beauty, hope, and reawakening”— no love there, and, according to the magazine, “a conduit between Vogue’s past and its present”. This flower-as-channel between eras allows the revisit of one of publication’s most compelling still-life photographers: Irving Penn. The cover photo was originally shot by Mr Penn in 1970 in London, and now makes a posthumous cover art. The rose, Vanda Miss Joaquim of England, is, as they say in fashion, having a moment. Around us we hear Elvis Costello singing, “As the door behind you closes/The only thing I have to say/It’s been a good year for the roses”.