At Loewe, boys play grown up by trying their mother’s clothes 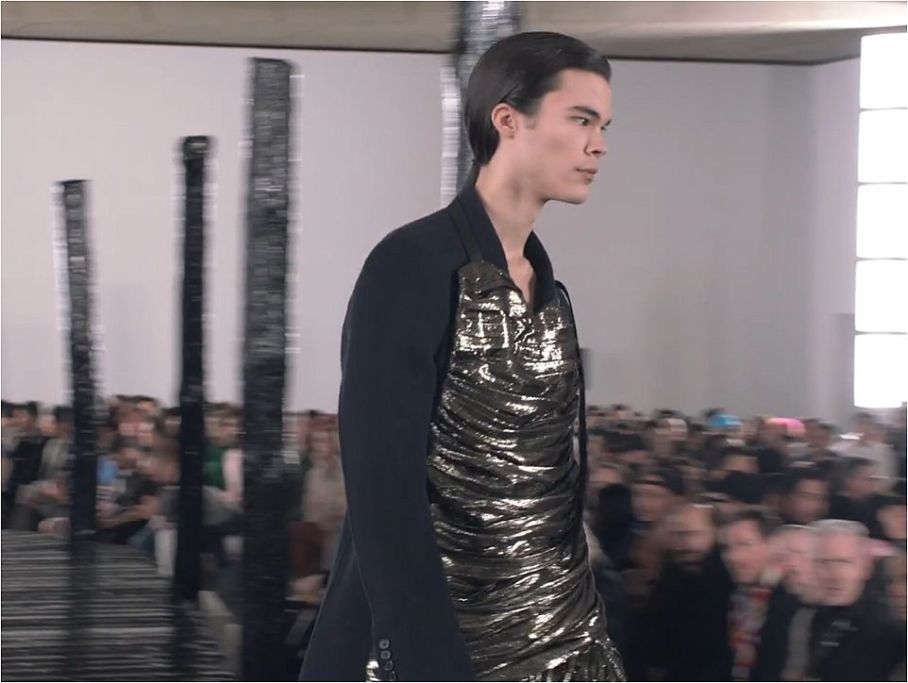 You’d think that Jonathan Anderson may not have any more of the delightfully off-beat under his sleeves after last A/W’s whimsical and resistance-is-futile collection, in particular the William De Morgan capsule and the magical knits. But no, he’s gone on to tackle an even harder subject (and a conundrum that won’t go away): guys who have their eyes on dresses. In particular, iridescent ones, better still if they’re of high fashion stock. Swiftly, Mr Anderson has moved from craft to couture.

From the first look, you know this is going to shake your sense of what constitutes modern masculinity in an already a-lot-less binary world: men in a dress. But Mr Anderson isn’t inclined to offer something so obvious. It’s only a suggestion of a man in a dress (there are, in fact, three of them): the models don’t actually wear one. From the front and in a flash, it sure looks like a dress—chintzy and gaudy, something you’d likely see at a hostess club or a prom—but they are each worn, with straps at the neck and waist, as an apron! It sure is a gotcha moment. Empowering, too? Or just an illusion? 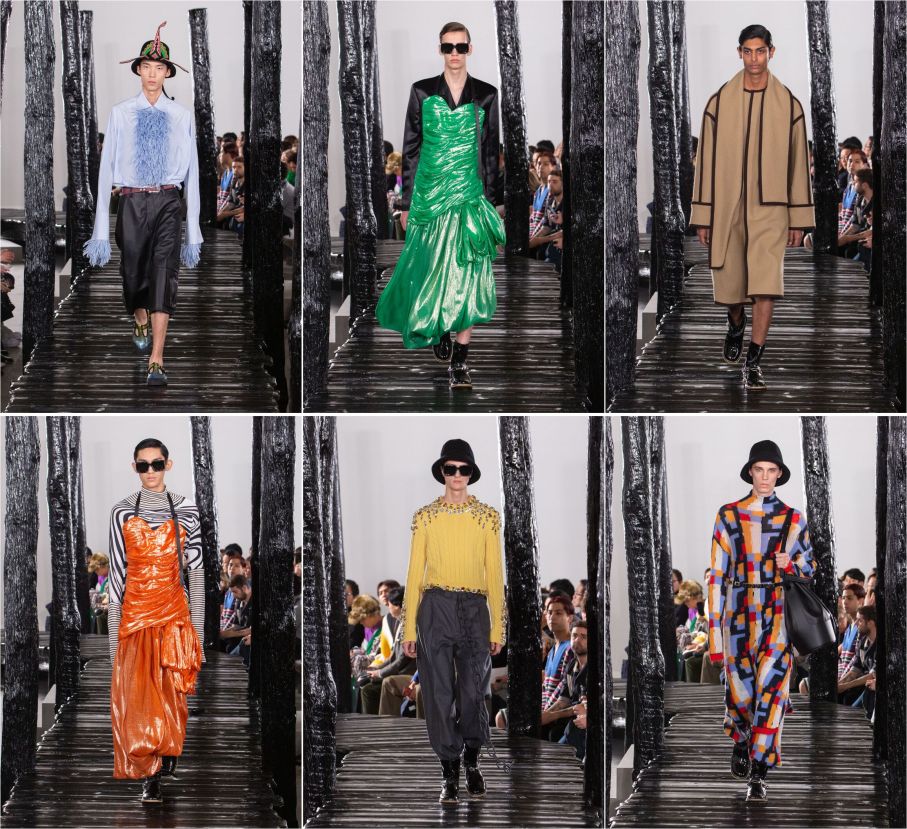 But that isn’t the end of it. These aren’t frocks worn for effect. A theme can soon be discerned. By the forth look—a Prada-worthy sweater with marabou collar and clam-diggers with marabou cuff—you know something is afoot. Then comes the tunics (that are actually worn like dresses), swing coats, and one with oversized shawl lapel, a couple with capes, pullovers with bejewelled shoulders and cuffs, blousy shirts, and more outerwear you’d see at a country club or what Bunny MacDougal might wear. It’s as if Mr Anderson has handed the entire pattern-making to the women’s wear team. We have not seen the clothes up-close, so we can’t say if the handling is like women’s wear too.

Sure, men in dresses are as new as them in skirts. And a dress held-up as a dress, and not actually worn is not novel either. Still, to see Mr Anderson send them down the runway for a house not his own—and once considered traditional—is a perhaps a little outré, although gender bending of even more extreme measure has happened elsewhere. A second viewing of the collection suggest to us that this isn’t merely allowing men to ape what women wear. These are not boys wanting to look like their sisters; they seem more enamoured with their mother’s wardrobe. Women’s old is men’s new. 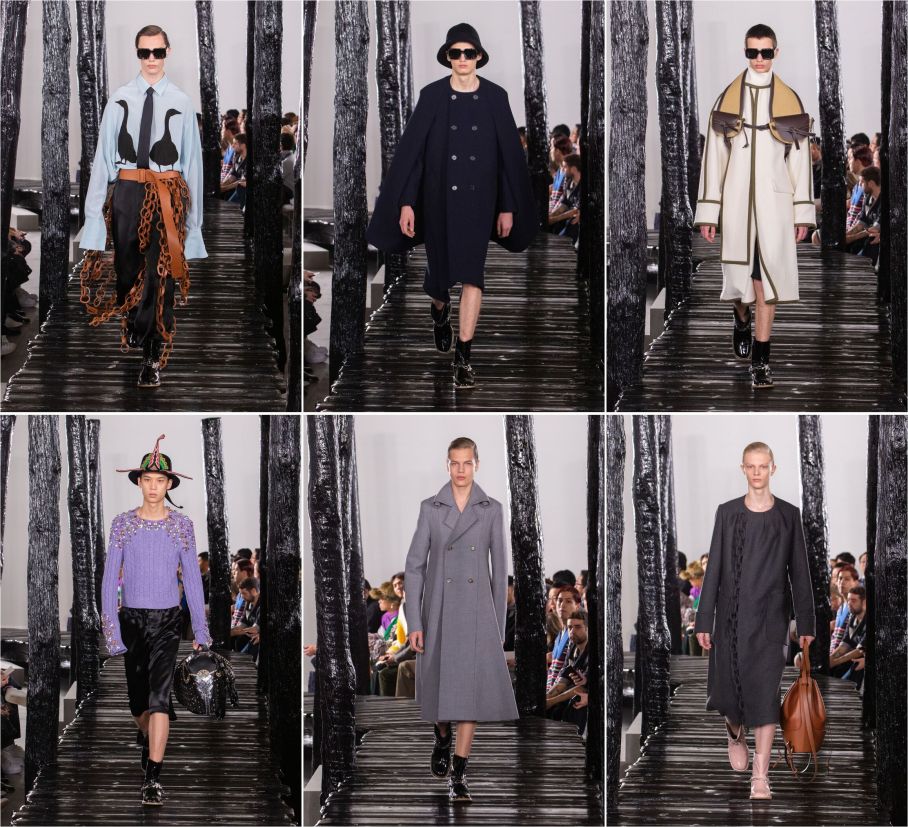 The clothing of women of a certain age and taste are tapped, not those who are enamoured with, say, Chanel or Jil Sander or, on the other end of the aesthetic spectrum, Comme des Garçons. That the frumpy femininity and potential bad drag need to be played down by putting the guys in boots (nary a pair of sneakers!) and belts of chunky chains (Louis Vuitton Men!) or fringing made with them suggests, perhaps, that for men to adopt female garb without appearing to really cross gender lines, some form of counterpoint is crucial, some cancelling out of camp cliches compulsory. Au courant is when you dress like a woman, but not as one.

Accessories, therefore, come to play: elephantine ones. The bags, quite literally! The proboscidea-shaped carry-alls (the elephant is already a ‘traditional’ animal shape at Loewe) are likely going to be a major hit (on IG, for sure), with iridescent/studded ones worthy of a maharajah’s wardrobe. Not since Thom Browne’s simple-by-comparison dog-bag—inspired by his dachshund Hector and still in production—has there been a bag shaped after mammals that is so unlike those kitty kits that tend to make it to handbag shelves, making it both conversation-starter and potential social-media star. What to make of all this? Are guys really going to wear dresses, and carry elephant bags henceforth? We really don’t know.

One thought on “Raiding Mama’s Closet”