The Hong Kong-based multi-brand beauty store will leave our shores, taking with them their staggering array of sheet masks and to-be-expected all-year discounts

They have been here for 22 years and 41 in Hong Kong; their moniker, shorthand for brand-name beauty products uncommonly discounted. The news that spread like a Kalimantan wild fire this morning was that Sasa (莎莎) will close all 22 stores here. After 22 years! Okay, I repeat. Anyway, a friend had messaged me about the announcement, but I already heard it and was not surprised. Since their very first store here in Wisma Atria in 1997, the year Hong Kong returned to China, Causeway Bay-born Sasa has not made a dent in the local beauty retail scene, arousing less interest when Sephora opened 11 years later. Its destiny seemed set even back then.

Reported to be the SAR’s biggest cosmetics retailer, the HKEX-listed (1997) company is more associated with marked–downs on some popular brands than as a forward retailer associated with trending brands such as Fenty Beauty or Drunk Elephant. It’s tempting to assume that the troubles afflicting Hong Kong for the past six months gave cause to Sasa’s leaving the SG market. Although that is likely part of the reasons (Sasa depends mostly on the massive tourist arrivals from China for its success in HK—last year, 70% of total sales, and is understandably now under operating pressure), it may be worth noting that they pulled out of Taiwan—in a similarly surprising move— last year, way before the woes of their home city. 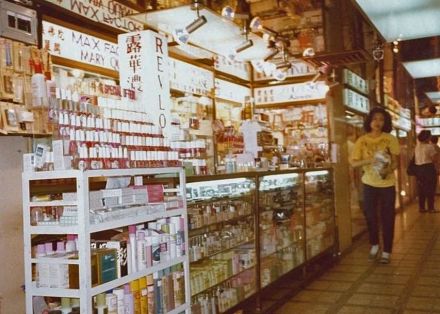 The first Sasa store in the basement of a Causeway Bay mall in 1978. Photo: Sasa

Sasa was founded in 1978 by a former parking meter repairman Simon Kwok Siu Ming (郭少明) and his wife Eleanor Law Kwai Chun (羅桂珍), a self-professed business novice. The first store was a modest basement space in a nondescript, now-nobody-knows-nobody-goes building, President Shopping Centre, on Jaffe Road, a back street in Causeway Bay, two blocks behind Sogo Department Store, the belly button of the shopping district considered in this decade to be the world’s most expensive. Sasa then would remind you of Swanston (or Ocean Cosmetics) on the upper levels of People’s Park Food Centre in Chinatown, only smaller.

According to the Kwoks, the missus was, at first, working in the store selling Kanebo cosmetics. When a takeover offer became available, the couple, who had the advantage of living in an apartment above, decided to buy the business after Mrs Kwok was able to secure a loan from her mother. Both born sales people, the Kwoks did so well that in six years, they were able to rent all the shop lots in the basement of President Shopping Centre to house Sasa. In 1989, following a massive rent hike, they decided to move to a street-level space in Causeway Bay for the first time. Today, in this area alone, there are nine Sasa stores, with Sasa Supreme in Leighton Centre being the swankiest. 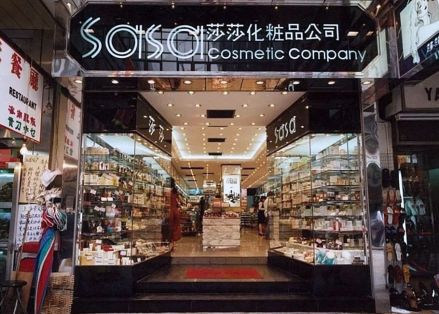 Sasa on Granville Road in Tsim Sha Tsui in the mid-1990s. Photo: Sasa

But swank has not really been part of the Sasa image. Sure, through the years they’ve tried cosmetic improvements (that corporate pink), but have never quite shaken off their bargain-basement profile. I remember my first visit, in 1998, to Sasa’s first store in Tsim Sha Tsui.  It was on Granville Road, then a riot of hipster shops and outlets selling overruns, and, past midnight, push-carts galore hawking anything and everything. The store front was flanked by about a metre-and-half-in-length windows that ran parallel and reminded me of shops in the still-seedy Wan Chai of the ’90s. Back then, there weren’t many mainland Chinese tourists. Transactions and inquiries were done over glass-topped counters, back-dropped by, on each side, a wall full of products that never enjoyed an iota of visual merchandising—it was like a medical hall of the past. You were served by indifferent staff who spoke only Cantonese (nope, no putonghua yet). As I was not a customer who would be spending thousands of Hong Kong dollars, the staff paid little attention to me. When they did, they tried to get me into buying complete sets of skincare products. All I wanted was a lip balm (it was winter).

Cut to Wisma Atria in 1997. I remember I was surprised to see Sasa here and had ventured in to see if it was anything like what I had, till then, experienced in Hong Kong—bad, to say the least. As it happened, I did have something I needed to get—a cleanser. A salesgirl was quick to receive me, but her insistence on showing me something when I told her I was only browsing reminded me why I had, after so many years, avoided Sasa in Hong Kong (to be honest, I did visit the stores, but bought nothing and, to be sure, I was not expecting Joyce Beauty). To meet the woman’s eagerness, I told her I was looking for cleansers. She immediately showed me one from Suisse Programme (Sasa is the distributor) and then proceeded to try to sell me four additional products from the brand despite my visible—verbal, too—lack of interest. The store’s pushy ways seem to have remained with them till this day. I often wonder if Eleanor Law Kwai Chun was similarly persistent in her selling. 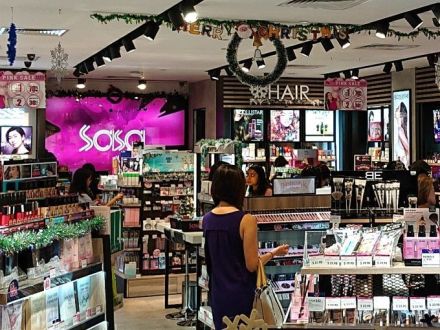 Despite parent company Sa Sa International Holdings (the name is spelled as two words) achieving the status of a HK$14.7 billion cosmetics empire (2018), selling a staggering 17,000 plus products in Hong Kong, Macau, the major cities in China, Malaysia, and Singapore, Sasa the retail outfit never became an Asian Sephora that it could have been. Although they were initially associated with Japanese brands Kanebo, Kose, and Shiseido, they took a different route in the 2000s, offering cheap Korean brands to which similarly-positioned Chinese and Taiwanese names were added. Sure, they still keep ‘prestige’ Northern European brands such as Methode Swiss, La Colline, Collistar, and Suisse Programme (and Procter & Gamble-owned Japanese skincare line SKII, which once attracted shoppers to Sasa because of the discount offered—reported to be up to 30 percent), but those are usually overshadowed by cheaper offerings strategically placed in the front of the shops. Yet, they are never really considered a bargain store. Prices are not that cheap. In fact, I was often told, some products are better priced in Hong Kong.

I am no business analyst, so I can’t offer a definitive on what went wrong with Sasa. But I can say from my own experience in the stores in Hong Kong, Shanghai, Beijing, Kuala Lumpur, Penang, and, of course, here on home turf that Sasa feels like, operationally, they have never left their early years. In the mean time, chain stores such as Mannings and Watson were improving by leaps and bounds. What, for me, continued to be a non-lure is Sasa’s service. It never quite met expectations, especially in the face of e-commerce competition or, worse, Sephora’s very appealing “assisted self-service”. To catch up, they launched Sasa Click & Collect app in June, but that meant, to receive my orders, I would still need to go into the physical store that I want to avoid.

The mind-boggling array of sheet masks, now very much associated with Sasa

On-line chatter took the news of Sasa’s closure as opportunity to bitch about the retailer (read the posts on the forum page of hardwarezone.com.sg, for example). Sure, there are always haters in every industry, but not all of the complains are invalid. I am astonished that Sasa has not taken into consideration consumer sentiment in their earlier internal revamp. According to a company statement released to the media, Sasa said, “In order to improve the performance of the Singapore market, the group had taken measures in recent years to restructure the local management team and to enhance store display and product mix with a view to driving sales. Regrettably, the results were far from satisfactory.”

Driving sales without first bringing in customers is, of course, challenging and can show results that are divorced from satisfactory. And enhanced store display that takes after those of stores with five-foot-way frontage (or shops such as Beauty Language) and product mix that is too jumbled to be of appeal to the discerning beauty consumer seem to be stepping away from what is considered shopper-savvy selling. A hodgepodge, of course, can be fun—look at Japan’s largest drugstore chain Matsumoto Kiyoshi or the cooler and younger Cosme Kitchen. I don’t know about you, but stepping into Sasa has been, for me, mostly a bewildering, near headache-inducing affair, whether in Hong Kong or right here.