In just this month alone, two announcements of the union of the haute and the not. Will we really be better off buying not one or the other, but both-as-one? 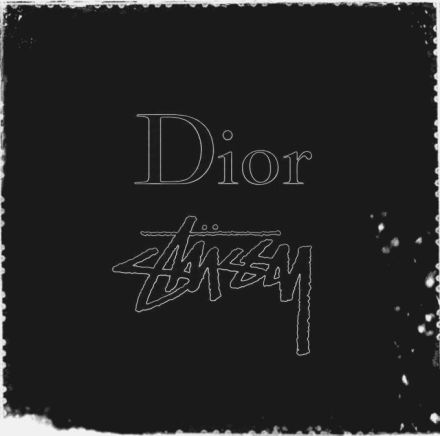 An imagined logo of the Dior and Stüssy partnership. Photo: Lyle Low

The latest to join the still-important hi-lo brand pairing is the storied house of Dior and the once-a-surfwear label Stüssy. According to “leaks”, now circulating on social media and reported in e-mags, Dior, steered by Kim Jones, is repeating what he once did at Louis Vuitton, where he paired the French brand with an American, the hype-driven Supreme, to incredible ballyhoo and unimaginable success.

Based on what’s been shared, the Dior X Stüssy collab will comprise what the latter is good at producing: T-shirts, polo shirts and caps, and (what looks to us as) the odd bandana. It should be said that Stüssy is on a different level, design-wise, if you were to compare it with today’s choice collaborator, Supreme. Stüssy leans towards design with more discernible tilt than other streetwear brands. It is, therefore, understandable that the interest generated is strong. Dior and Stüssy have, so far, remained mum about the collaboration.

Conversely, Prada and Adidas couldn’t keep the lid tight on their pairing. About two weeks ago, the Prada communication team sent out an advisory about the collab shortly after the news broke online. Although there is, hitherto, no visual released about potential designs, the curiosity generated burns with enough heat to keep sneakerheads on constant lookout for unannounced drops. I, like others, speculate that it would be sneaker releases although why Prada needed to do that given their strength in cool, category-defining (or rejecting) kicks is a little beyond immediate comprehension.

The Prada and Adidas collab is in the bag. Photo: Prada

There’s no avoiding it, these days: luxury fashion names aligning with streetwear and sports brands. It’s bubbling up and trickling down swirling simultaneously, the shang and xia meeting half-way or, in some cases, all the way. Fashion, of course, has to be inclusive, no exception. When the twain once shan’t meet, they now walk hand-in-hand. It has happened in art and music, but when it comes to fashion, the players are a little late in kicking elitism out of the door. It should, however, be said that the Japanese were already there: even before Junya Watanabe’s early collab with Nike and Levi’s, his mentor Rei Kawakubo, through Comme des Garçons had done high by exploring low and what can be further down that tatters?

The world was, of course, once a much simpler place. If you had money and appreciated designer clothes for design, you bought which ever designer name you fancied—decked out head-to-toe, underwear included. If you didn’t have the means and didn’t quite understand why north and south should meet when there’s is already the equator, you stick to those brands that said very little other than this was what you wore, end of story. Inclusivity, for better or worse, has wiped out such distinction.

These days, luxury brands rarely pair with luxury brands. This season, Valentino and Undercover (and to an extent the next’s Dries Van Noten and Christian Lacroix) are exceptions than the norm. When previously a luxury name teams with a mass brand (not even ‘masstige’) to appeal to the latter’s customer base or to produce non-traditional products such as denim jeans so that the bigwig did not have to go into the non-luxury product category, labels today justify their pairings by loftier motivations. As Prada explained their collab with Adidas, “the aim of this partnership is to investigate the realms of heritage, technology and innovation—and to challenge conventional wisdom through unexpected strategies”. Believe and buy.

One thought on “Meet In The Middle: The High And The Low”