Go crazy! The first in Southeast Asia, Undercover’s Madstore is a provision shop that happens to be a hipster hub 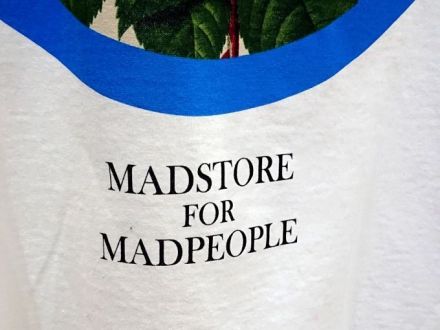 Way before yesterday’s published opening time of Undercover’s debut Madstore in SG, a pop-up in the main atrium of ION Orchard, fans of Jun Takahashi’s label were milling in front of the un-walled and un-glassed-up space, eyeing what to cop. It is not known that any merch stocked here would be in limited quantities, but it looked to me that many of the impatient shoppers weren’t taking any chances.

Their palpable enthusiam is understandable and was to be expected. This is Mr Takahashi doing what compatriot Nigo had done so well with A Bathing Ape many years ago: creating cool fashion products with a streetwear bent that are priced attractively—not too cheap and not too expensive; the sweet spot of S$120 on average for a T-shirt. Although A Bathing Ape was sold to Hong Kong’s IT Group in 2011, its merchandising approach and sharp pricing continue to influence later Tokyo streetwear brands and retailers such as Ground Y and Atmos.

To enhance the ‘Mad’ experience, Mr Takahashi takes it further by vending not only the clothes with the off-centre graphics that he is known for, but also zany products that enhance the crazy-cool illustrations that are often applied on the clothes, so alluringly that they enticed Pierpaolo Piccioli to commission Mr Takahashi to design beguiling collages for Valentino this season. Whether happy coincidence or deliberate strategy, I couldn’t tell, but the Madstore pop-up sat directly opposite the temporary Valentino shoe and handbag store.

I mention Nigo on purpose. Back in 1993, he opened his first store Nowhere with Jun Takahashi—then also the vocalist of the the cover band Tokyo Sex Pistols—in the yet-to-be-trendy part of Harajuku known locally as Ura-Harajuku (or urahara for short, the ‘back’ of Harajuku, now punctuated with many too-hip sneaker stores). Undercover was born earlier—in 1990, but I suspect Nowhere allowed Mr Takahashi to plant the seed that would eventually sprout as the precursor to the Mad Store, the Mad Market. 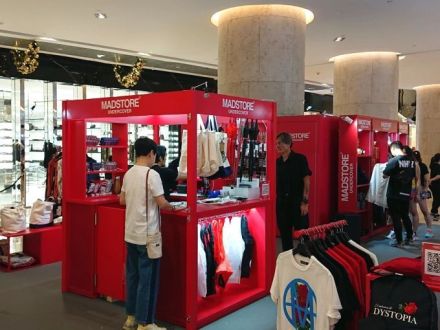 I remember the Mad Market well. It was initially sited in Undercover’s flagship store in Aoyama, Tokyo, next to what had been the 10 Corso Como Comme des Garçons store. Unlike the unmistakable look of the Madstore, with the red (or green) utilitarian display units, the Mad Market, as the name suggests, was more ichiba in its approach and was an organised jumble of ‘vintage’ (past season, including samples), current, and pre-loved Undercover clothes, collab merchandise, other brands (such as the Spanish head wear label Buff) and assorted knick-knacks, as well as furniture. Somehow, it reminded me of the now-defunct Comme des Garçons Guerrilla store.

Fast forward to 2015, the Mad Market morphed into the Madstore and it debuted in the old Parco Shibuya Part 1, in a space opposite the maze-like Comme des Garçons. This Madstore was curated to weaken even the most controlled shopper into opening up his wallet. The space was a veritable provision shop! You just sensed that there was something to be bought. And it was filled with many products priced at what retail analysts would call entry level.

But affordable did not mean aesthetically lame. In fact, Undercover merchandise—from T-shirts sporting the iconic teddy bears with blocked-out eyes to purses in the shape of edibles such as celery sticks to home wares such as the fanged burger lamp—communicate a visual language that has its roots in punk, but draws one in with the immediacy of those of Supreme, oftentimes with a dose of irreverence and provocative humour—photo prints of supposed Biblical images with ‘Mad’ printed conspicuously in a corner!

I have always found Undercover’s high-toned casual wear appealing, whether in its own outlets, in an Isetan corner, or in the Madstore. It is in the latter that perhaps one might find browsing—a ritual overtaken by online scrolling—the merch fun. Undercover may be a fashion label, but Madstore lives up to the brand’s motto: We Make Noise Not Clothes. However, this is no clamour; rather, the merchandise mix is a chatter that one might find in a delicatessen, a hum of admiration by those in the know.

My observation showed me that the visitors to the Madstore pop-up are well aware of what it offered and the appeal within. I saw shoppers eyeing not only the large selection of tees (the one with the underscored U appeared popular) and the logo-ed windbreakers, but also the sub-brands of JohnUndercover and SueUndercover, as well as the small accessories, such as Medicom Toy danglies, which, at S$30 a pop for the Undercover teddy bear mascot, is the cheapest product to purchase.

According to the staff, this is “the first (free-standing) Madstore in Southeast Asia” (opened in partnership with Club 21, but Isetan in Kuala Lumpur, too, has recently erected a mini-me version) and the largest outside Japan (it looks to me to be about the same size as the one in Laforet, Harajuku). But this is not the first time Madstore appeared on our shores. It was first introduced to us as a small, against-a-single-wall unit in Dover Street Market Singapore, adjacent to the now closed stretch of Good Design Store. Later, some of the Madstore merch was (and still is) available in Undercover’s dedicated space. Wherever it appears, I’d say retail here could really do with going ‘Mad’.

4 thoughts on “Mad And Good”