A commentary on Britain and Europe or just alluding to political theatre, Demna Gvasalia’s Balenciaga is probably winning at the polls as he disports with bold shapes and runs with it

Whether fashion should have a blatant political voice is debatable, and whether Demna Gvasalia’s “Balenciaga parliament or assembly,” is shrewd or spoofy needs further examination. Yet, with so many components to both clothes and show that hint at politics and personalities, it is possible that Mr Gvasalia has affairs of state(s) in mind. We’re told he is exploring “power dressing and fashion uniforms”, both not necessarily related, but can pair up, which may explain those models kitted out as delegates of forgotten EU states. But, at first look, they appear to us parliamentary ushers, security personnel, Mdm Goh from accounts, the janitor on the way to work, even the Grab Food delivery person!

Mr Gvasalia, of course, has been partial to archetype, one rooted in the mundane and even nothingness. Under the guise of what the rest of us wear and consume, he modifies and refines familiar wardrobe pieces and gives them his spin on what Balenciaga means and constructs them in shapes not necessarily Balenciaga-eque, but shapes nonetheless. That they can be independent of the lines and curves of the body, with shoulders extending to there, add to their appeal. (Those old enough may recall a certain French designer called Claude Montana.) That, mostly, a small number of women consider these clothes attractive or enhancer of their femininity make them even more desirable. 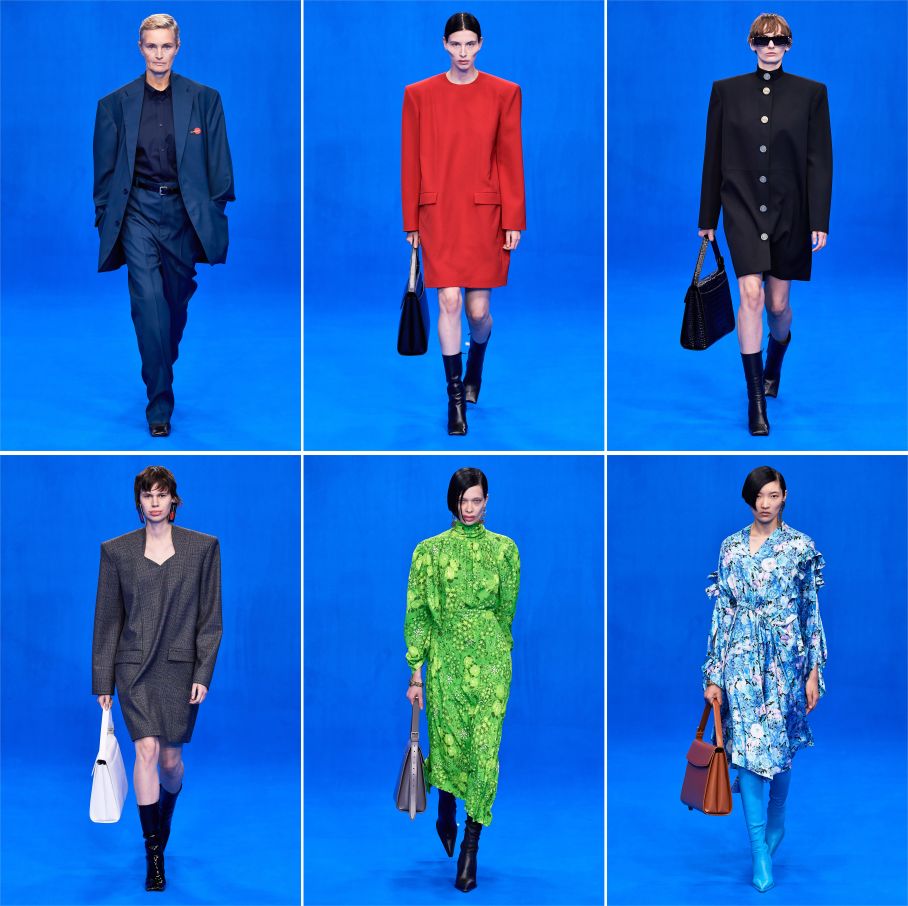 As usual, there is a lot to unpack, and what you get may not be immediately understood. By now, we know Mr Gvasalia does not make things easy for us (that could be his gift as a designer). Apart from the said archetypal styles, he seems enamoured with the clearly less haute, bent on re-expressing what should have been the ordinary. The puffer jacket (its current popularity in winter months can be attributed to the first he introduced for Balenciaga back in the long ago of 2016), for example, appears again. That it is for spring, no one really wonders why. That it looks like something a Shenyang road sweeper might wear to mimic the condition similar to Quasimodo’s, no eyebrows are raised, when they should be.

Irony is still the hallmark of Mr Gvasalia’s work and he does not hold back. While there are none similar to the DHL T-shirts he sent out for Vetements as its former designer, there are those that allow the wearer to declare that they’re “X-Rated”, “18+”, or a “Top Model”. Taking after familiar commercial logos, he fashions a new Balenciaga framed by two circles similar to Mastercard, which appears on clothes as well as credit-card-like earrings. An assurance that even after no longer designing Vetements, which he co-founded with his brother, Mr Gvasalia can still infuse Balenciaga with quirky banality. 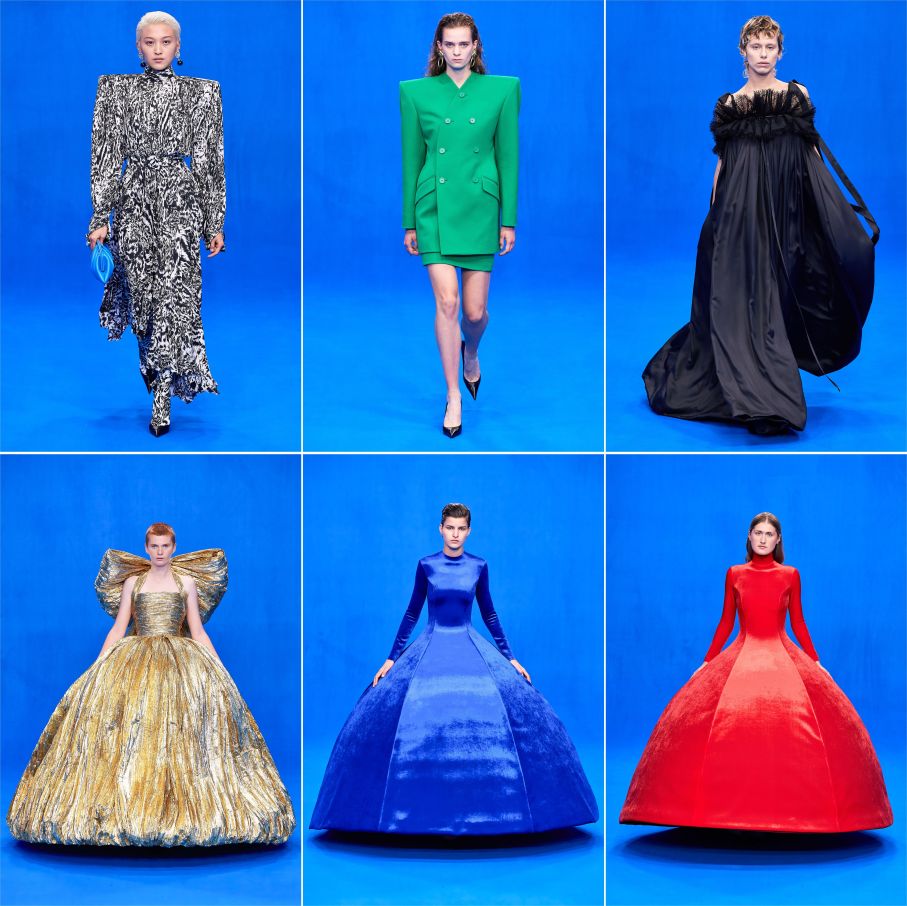 However, does parodying logos that identify products and such also include fabric treatments we have come to associate with a particular brand? There are those Issey Miyake/Pleats Please/Homme Plisse-looking dusters and blazers and shirts, slipped on as if the wearer has just picked one of them up from a suitcase of equally unpressed clothes (and ironing is not today’s habit!), that we aren’t sure are trenchancy or homage. More certain to us are the fluid dresses (by now a staple) of not-quite-simple prints: they have the potential of becoming the house signature the way the blazers (and the puffers) are so aligned with Mr Gvasalia’s vision for Balenciaga, nostalgic romaticism included.

For many influencer-attendees of the show, the last five dresses “stun”. These are ballgowns, quite literally, or almost half-balls, crinoline-supported skirts, moving with the rigidity of umbrellas designed to withstand the typhoon. In solid colours and devoid of decorations, they are nothing like their Victorian versions, which this quintet is possibly modelled after. The modernity is clear, even men can wear them, which would probably delight Billy Porter to no end. Somehow, the final three remind us of Grace Jones’s gown in the Jean-Paul Goude-directed music video for Slave to the Rhythm. Ms Jones emerged from the top of a black rotunda of a skirt with large coloured dots that seem to take after those on rainbow globe lights. Then and now share one common feature: simple, long-sleeved, upper halves. Could this be Demna Gvasalia returning to classics?

One thought on “Balenciaga For After Brexit?”