Who is Marc Jacobs paying homage to this time? 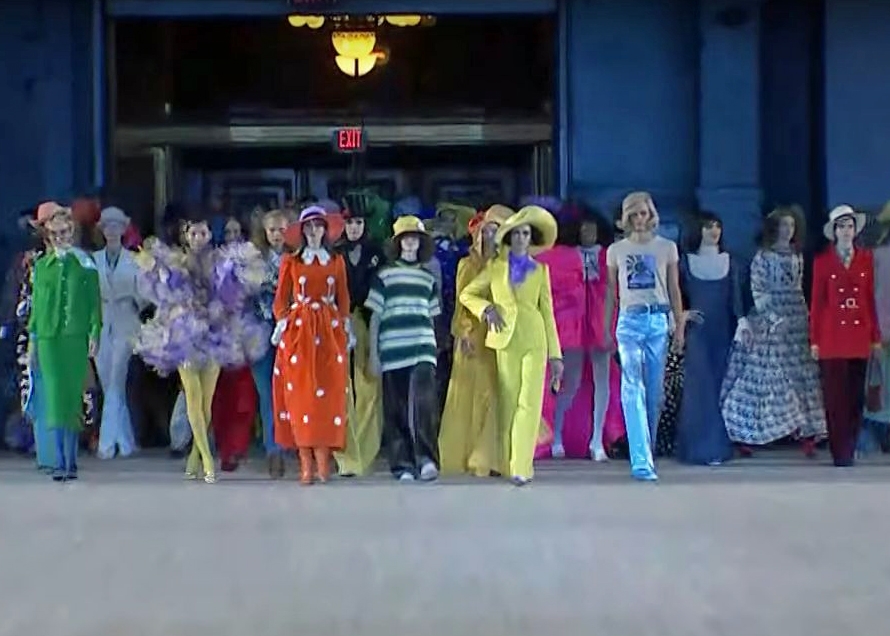 There could be good reason why Marc Jacobs gets to close New York Fashion Week (NYFW). Again. Most of NYFW is (still) so bland, repetitive, and uninspiring that New Yorkers need their once-Paris-based star to offer the drama (and irreverence?) an event such as this increasingly require so that there is build-up, and the attendees can get their fashion-week high. Mr Jacobs is, of course, up for the task. And he knows that he is the only one with the gumption to close the week with considerable bang. But did he?

The spectacle is certainly there. And one gets the feeling that fun is what Mr Jacobs is bent on having and that the models, too, have been given marching orders to have a good time, whether in a T-shirt or swathed in swirls. Mr Jacobs sense of jollification means that he does not need to play by rules, respect codes, or even meet expectations. He puts on the runway whatever pleases him, tented prairie dresses included. In the bareness of the show venue—once more the Park Avenue Armory—and its vastness, the clothes need all the exuberance they can pull to beat other shows (namely in Paris) with set so massive and are so detailed that it isn’t surprising Hollywood specialists were involved. And they are spirited clothes.

But do they make him leader of the New York pack? Yes, if only because Mr Jacobs does not care what you and I think. He is past proving to us that he can do a perfect jacket or flounce the most cumbersome dress. I’m doing Fashion, he seems to say, and, in case the collection gets untranslatable on the selling floor, he throws in some street style reminiscent of Marc by Marc Jacobs for good measure. 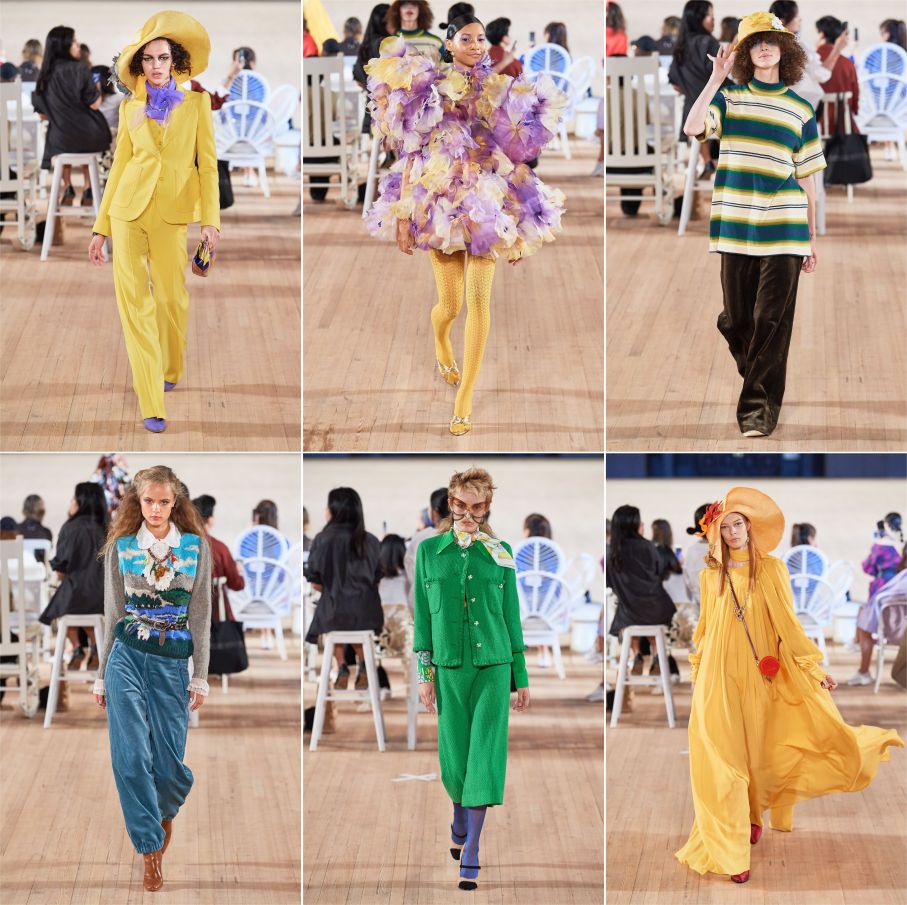 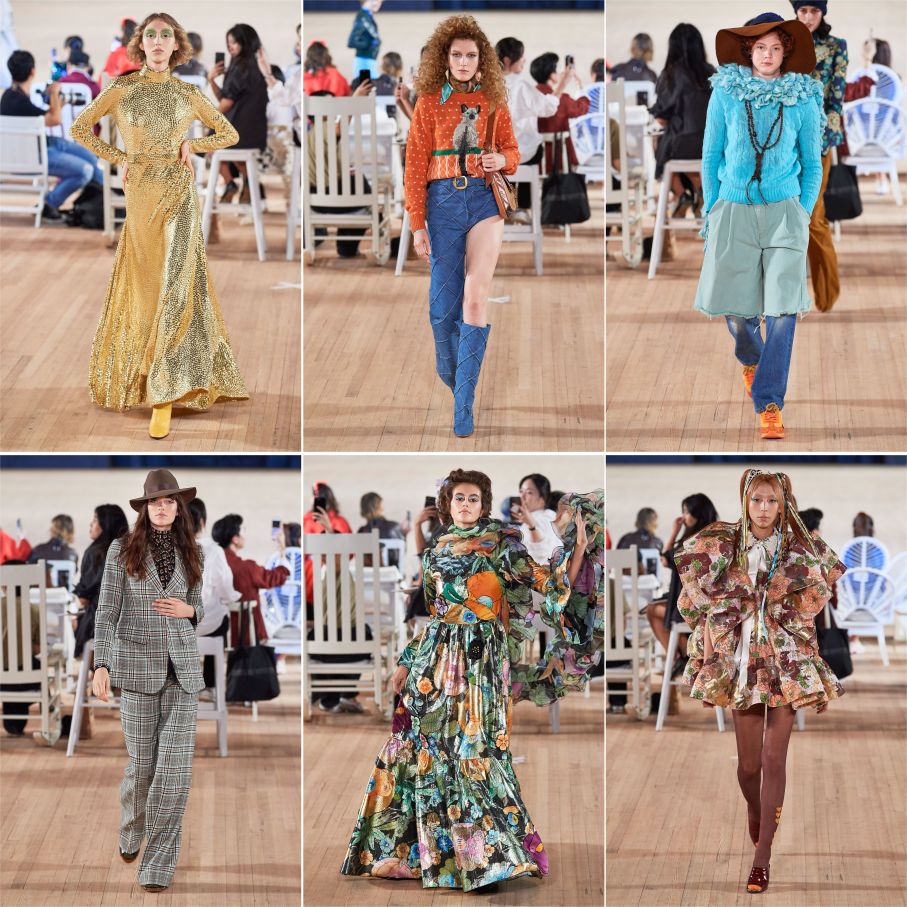 According to online reports, Mr Jacobs is looking back to the past. When has he not? This time, it is to 2001, the year of the New York tragedy that brought the World Trade Centre down, to his collection that preceded that world-changing time. Mr Jacobs was still with Louis Vuitton then, four years into the job. His success at LV brought a strong sense of confidence to his own label. One of the earliest to celebrate the ’80s, he sent out a collection that had all the joie that we see in the current, but was hitched to wearable than haute. In describing Mr Jacobs’s designs today, eighteen years after that show, nostalgic is a word still bandied about.

In the addition to vivid recall, Mr Jacobs seems to have, in his clothes, invited his friends or those he admires. As in the past, Yves Saint Laurent is there, so is his former rival Karl Lagerfeld. Valentino via Pierpaolo Piccioli shows up. Ditto Gucci via Alessandro Michele. Viktor and Rolf appears, as well as Franco Moschino and Elio Fiorucci; even the milliner Lilly Daché attends. So do, surprise, Michael Kors and Ralph Lauren. And, gosh, Canal Jeans Company!

Perhaps he’s also suggesting that, like him, Mr Ford’s customers are inspired by others too, dead or alive, real or not. Women can be like style icon Anita Pallenberg, models can channel Pat Cleveland (with the exception of Gigi Hadid who only does Gigi Hadid). Between that, Olive Oyl, Anita Ekberg, or Karen White, maybe? 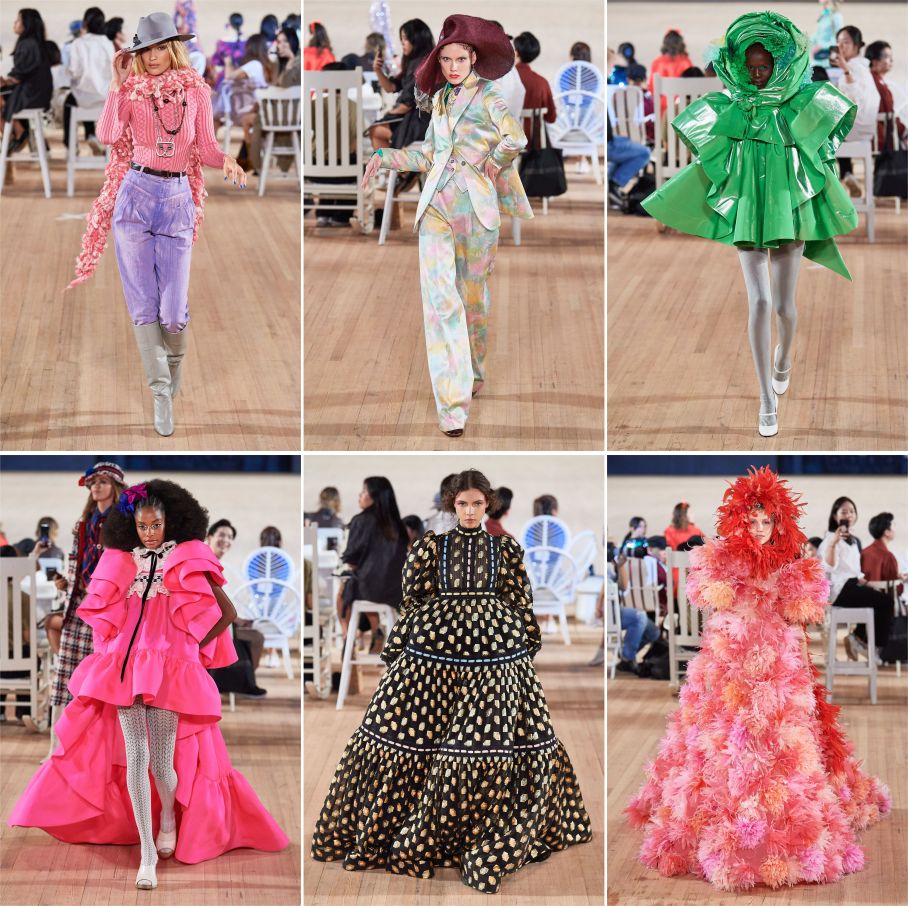 A collection these days is, of course, no longer based on a theme, a clothing category, or even clear narrative. According to the show notes as cited by the press, the designs and styling serve as “reminder of the joy in dressing up”. Mr Jacobs allows anything-goes to dictate—practical and whimsical happily co-exist, so do florals and checks, sheer and tweedy. They come together in a way that sometimes contradicts popular wisdom of how women now dress: not dressed up! Perhaps, doll up is what Mr Jacobs is alluding to, for there are some pieces that even getai singers would find challenging.

To be fair, he is on-trend too. Just as reports repeat in your news feed about the popularity of asymmetric jeans, Mr Jacobs shows a pair that’s half slim-fit, half shorts. But perhaps trend setting is not quite the mission here, playing the ultimate fashion designer is. Despite rumours of declining fortunes, Marc Jacobs has not succumbed to making clothes that don’t grab headlines. If NYFW in its rebirth is banking on New York’s favourite son to elevate its standing among fashion weeks, they can sure benefit from his jaunty optimism.