With input from Engineered Garments, Uniqlo re-imagines their classic Dry polo. And it works

Earlier today, Uniqlo launched the 17-style UT colleciton based on the recognisable graphics of BFF, the mascot/alter ego of KAWS, aka Brian Donnelly, whose Grover-like character is also loved by designers such as Kim Jones of Dior. In fact, the appeal of KAWs need no explanation here. By now, you must have heard of how difficult it is to score one of them tees, how shoppers where mostly left disappointed, how scalpers won the day. In China, it was reported, pandemonium broke out.

I saw the frenzied shopping; I saw the low merchandise levels, and I saw the over-purchases of a few individuals. To be sure, I was not at the Uniqlo flagship to jostle with gangly 13-year-olds and the mothers determined to acquire the tees that will ensure that their children are dressed cool. I came for something else. In another part of the store, a somewhat low-key launch three days ago is now barely drawing the attention of even one shopper.

Uniqlo has paired with Engineered Garments to rework its Dry polo shirts, not exactly the most exciting garment in the Uniqlo repertoire—therefore, will benefit from an update. I had thought that this would have come earlier, under their U product line, steered by Christophe Lemaire, but that didn’t quite happen. Sure, Mr Lemaire and his team has put out polo shirts. They made them boxier and baggier than what Uniqlo is accustomed to, but they did not really give the garment a major makeover. Or, has the hoodie risen to the point of detriment to the polo shirt? 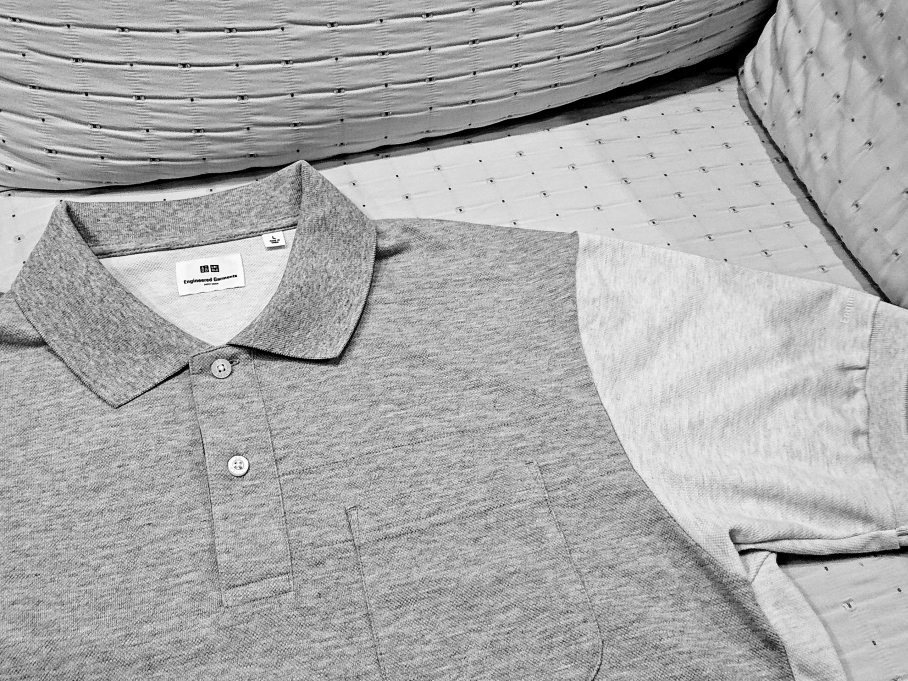 With Engineered Garments, a New York label headed by Japan-born Daiki Suzuki, the polo shirts now look a lot more interesting, hence alluring. Mr Suzuki did not change the shape of the garment that Rene Lacoste made popular off-court, but within it, details were introduced in a way only the Japanese can. Engineered Garments is not exactly known as an advant-garde label. Fans note with delight how they handsomely rework and improve American work wear, and have more in common with brands such as Visvim than the more alt, such as Kolor. Their attention to detail is well-known. Some work shirts are reportedly sewn up with five different types of sewing machines!

This collaboration sees Engineered Garments incorporating details not commonly seen in polo shirts. I am drawn to the one with three, not-equal panels of different prints—animals, polka dots, and flora and fauna, all in subtle tones of grey on grey (there’s also a striped version)—so subtle, in fact, that some people thought them to be sweat stains! I also like how they’ve brought the side seams of the shirts slightly to the front, allowing a hint of the contrast fabric of the back to be seen. Other details include a pair of parallel seams on the side of the breast pocket—barely discernible, but the wearer know it’s there, subtlety so absent in an age of access.

Uniqlo has availed their Dry polo shirts for Engineered Garments to rework. These are not my favourite at Uniqlo, primarily because I don’t generally go for cotton-blend shirts. The Dry is, as the name suggests, a tad too dry for me in terms of hand feel, which means the fabric aren’t as soft as their 100% cotton cousin. Dry has 28% polyester in the blend, which isn’t a lot, compared to the 100% polyester Dry Ex version of the polos. To be fair, this piqué of the Dry feels softer even when the weave seems thicker, which gives the shirt a nice body that’s required for the boxy and loose shape. I’m rather taken by the fully-fashioned collar, which sits handsomely on the shoulder, without the tendency to curl up at the pointed tip.

I have not bought a polo shirt for a long time. The last was a Fred Perry tweaked by Comme des Garçons to appear geek-approved. Or was it the Lyle & Scott made less traditional by Junya Watanabe? Or maybe Mr Watanabe’s unmaking of Lacoste’s preppiness. Or perhaps Gosha Rubchinskiy’s massive, almost goofy shirt no tennis player worth his salt will wear on or off court? Yes, I have quite a few polo shirts (read: too many), but I do not wear them as often as other tops. People these days seem to equate polo shirts with uncle wear. Maybe Ralph Lauren’s (tentative) return may change that. Or Uniqlo’s pairing with Enigineered Garments.

The first time I was taken with the polo shirt was when I came upon fashion spreads in GQ of the ’80s, shot by the now-humiliated Bruce Weber, in partnership with the magazine’s forward-thinking (then assistant) art director, the late Donald Sterzin, who would later work with Mr Lauren, generating those images the Japanese admired as ‘Ivy’. Mr Weber shot the polo shirts—from Ralph Lauren to Merona (a sort of Gap of the day)—not on models but undergrads, such as Michael Ives from Yale and Jeff Aquilon from Pepperdine, who would later become faces that defined the ’80s rugged handsomeness. They didn’t only look good, but stylish in what, to me, were totally wearable and relatable clothes. It was the looking that good that was the hard part.

Haters will think the polo shirt never quite left the ’80s. Perhaps it never did. While designers have re-imagined the garment once related to sports involving horses, Ralph Lauren’s colourful Polo versions—and later “authentic American clothing” Abercrombie & Fitch’s over-washed, over-appliquéd constructs—affirmed the garment’s (retro-) collegiate smart, which soon sailed to obscurity along with baby-boomer style. I am not sure if the polo shirt will ever reclaim its former glory, but it will continue to effectively straddle the space between the now-too-formal shirt and the always-too-casual tee. It is, I feel, not quite yet destined for the fashion graveyard.