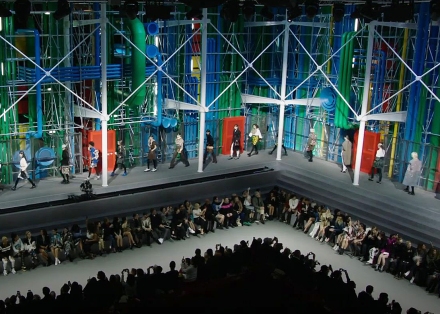 We had to watch the show thrice—once, live stream, twice, video posts—before we could attempt to make sense of what Nicolas Ghesquière has done for Louis Vuitton. The first reaction was, what the eff? Has he gone mad? Is he saying to hell with street wear and the apparent return of classics? Is fantasy, not a theme this Paris season, not the way forward?

We always like designers who do not make it easy for us. To that, Demna Gvasalia holds a special place in our hearts even if it took more than a season (was it two?) for us to get his Vetements. Mr Ghesquière, although not quite the provocateur that Mr Gvasalia tends to be, has always mostly intrigued than confound. But with this collection, we begin to wonder if he’s just as good at throwing us a curve ball.

Louis Vuitton, a commercial label for most of its existence in ready-to-wear, is suddenly high concept unadulterated. Or, as Mr Ghesquière tolds the media, the result of watching many fashion tribes. For autumn/winter 2019, Mr Ghesquière has put out so much that it was hard on the eyes. With a busy collection such as Gucci’s, the eyes can get lazy after the first five looks, but with the latest LV, you just can’t keep up. Visually, there was too much to digest. We mentally choke after three minutes.

View 1. When the first model came out, we thought we were watching another show. Could this be John Galliano? The make-up with the exaggerated lips is evocative, and the look, somewhat medieval, has all the requisite warped historicism. After more models came out, we thought Mr Galliano would not lens his collection through Alessandro Michele! Then when the top-heavy silhouette became unmistakable, you know for certain Nicolas Ghesquière is having a go at how far he can push design and, simultaneously, taste.

As with Comme des Garcons perfumes, this must be the hardest collection to describe (to date). Something is afoot if the clothes defy categorisation. Overall, there’s a vaguely ’70s and futuristic vibe in ways only Mr Ghesquière can express: retro yet not quite, ahead of his time, yet not too far ahead they’re from another galaxy. The looks, at first, seem to corral what has been known of late as ‘ugly’. And, are composed of what students of aesthetics of design are told to best avoid—such as inexplicable lines and flaps that obscure otherwise well thought out details and their placements. But Mr Ghesquière, we feel, is not a proponent of the obviously unattractive. His is a proposition of what happens if he doesn’t design obviously attractive.

View 2. The whole show was a visual assault—by the second time, in a good way. So much to catch before they flash past, so much to unpack and suss, details after details, shapes after shapes. It does beg the question: is it necessary to be so multitudinous and multi-dimensional? Or is this the deliberate opposite of the approach Hedi Slimane has adopted for Celine: just repeat a few ideas?

What caught our eyes were the flounces and ruffles. Not since Alber Elbaz at Lanvin has there been this many, so alluring and gravity-defyingly applied. But these aren’t quite the disco garb Anthony Vaccarello (even his predecessor Mr Slimane) proposed at Saint Laurent. There is something far more alluring about the LV flounces, some frame shoulders, some stretch to the navel, sometimes on only one side. They are beguiling, too, and also because Mr Ghesquière has created so many different versions of them: with top stitching as if to quilt (presumably to stiffen them), different fabric on the underside, and those that could have been part of some fantasy space cadet’s uniform. 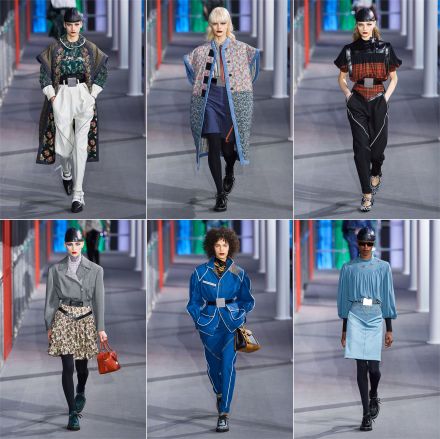 We can’t point out everything that filled us with wonderment. Some things simply shouldn’t be but are, and appeal because they have that quality called unexpected, never mind if they sometimes cross into the land of the lurid. Mr Ghesquière—a questing mind—seems to have just let himself loose, the alchemist aware of the advantage of madness.

He pairs fuzzy/glittery florals with military-coloured quilting (the fabric choices do not draw a line between high and low-brow, like how some prefixes easily cross lexical tracks). On bodices, he avails bib-like flaps that appear to have appeared with no plan. Such a way with zips, too, using them as one normally would with piping, as if his haberdasher has run out of the latter. Despite the unconventional mixes, he applies rather old-fashioned techniques: gathering, pleating, draping, etc on resolutely modern shapes. He adds slashes here and there as if crossing out a bad composition, but kept for the collection because, well, they are not bad, slashes included.

View 3. There are high-waisted and carrot-shaped pants, which, for us, recall those jodhpurs he once introduced at Balenciaga. There are dresses, but they are not straightforward frocks, rather compositional feats, with some Carrie White would happily wear. Much of the separates are designed as ensembles, which could mean that they would be difficult to pair if not worn together.

These are not basic, nor are they beyond basics. They are their own breed: clothes that transcends wardrobe staples into a territory we once called fashion. These are not garments for everyone and that, perhaps, is the eventual fascination and appreciation for us. Fashion, in its attempt to be consciously and unnaturally inclusive, has largely become easily and indiscriminately consumable. It is time to return some extraordinary, get-it-or-not shtick to it.

Nicolas Ghesquière must surely be one of the most creative designers of his generation, who not only made us see design possibilities, but also dressmaking possibilities. Cleverness or excess, genius or goof, Mr Ghesquière shows that Louis Vuitton is more than Virgil Abloh.