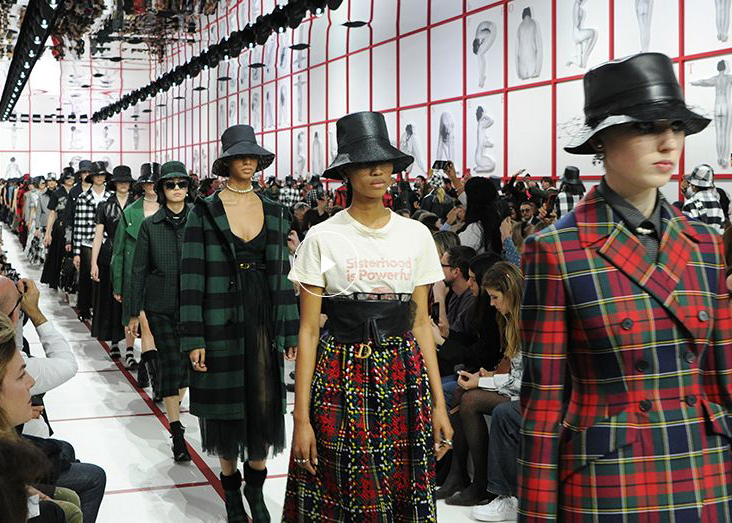 The one glorious thing about Maria Grazia Chiuri is that she’s not easily bored. After six seasons at Dior, she’s still beating the same drum. And it reverberates with the beat called feminism. Sure, her messages on T-shirts have been influential and copied, but the question is: by now, can’t they be delivered in another form? Is it not better to prove the point by being not only the first female designer to head the house of Dior, but also the best?

Maybe she knows she can’t be the best. Her Dior does not astound as John Galliano’s did or moved the way Raf Simons’s touched hearts. So, she leaves her mark by exploiting the commercial (what can be more so than T-shirts) and the popular, such as those proclamations on social media delivered in coloured quadrilaterals. For the third time now (or maybe more; we’ve stopped counting), she is delivering feminist messages (“Sisterhood is Global”, frankly, has less punch than “Girl Power”!) on unremarkable tees. Her brand of feminism may be politically trendy, but they’re sartorially boring. These are not the “J’adore Dior” of the #MeToo age.

Ms Chiuri positioned Dior in such a way that there is nothing to look forward to. Asking to be surprised is like expecting to be impressed, which is not what one hankers after at her shows. Hope for a spark of wit, a glimmer of genius, and hope in vain. Pray they do not show up again and they do: the Bar suit, the strapless dress, the sheer skirt under which shorts peek, all in different fabrics, but no different from the season before, and before that. They don’t even try to negate the fact that they’re repetitive and plain dull. As the feminist messages and posturing gain momentum, so do the ultra-feminine shapes and flourishes, styled for the romantic heroine. All the silk tulle in the world, all the lace, however, won’t veil the apparent: high-end middle-of-the-road.

Fashion Week analysts and insiders keep saying that Ms Chiuri’s Dior is designed to attract younger customers. This perhaps explain why her aesthetic sense does not heightened anything on the wearer other than to make them look like catwalk clones or influencer wannabes. Young women these days do not have fully formed ideas of what makes distinctive fashion. They may know what they like, but not what is nice. To them, as long as these clothes are good enough for the catwalk, they must have the requisite for being fashionable or cool. So all the reasons for those swinging pleated skirts, those can-be-from-anywhere shirts and blouses, and certainly those warped-neck T-shirts.

Journalists. who have nothing to say about Ms Chiuri’s design, write about how well-made the clothes are or how beautiful the 3-D flowers festooned on skirts look. Should we be expecting anything less from the 72-year-old house? But luxury fashion is more that the fine stitching and the application of decorative details. It needs the extra fillip—not taffeta and tulle, something visceral, something that prompted Carmel Snow to exclaim in 1947 in the Dior salon, “What a new look!”

There may not be another such moment in fashion. But there could be others: clothes that show previously unconsidered possibilities, and styles that dare to be different. Christian Dior was all that—and more, materially and metaphorically.