At the Louis Vuitton Men’s pop-up store in Tokyo’s Harajuku, you get to look at Virgil Abloh’s work in a setting that is nothing like the retail store. And that could be the problem—you may not feel like spending 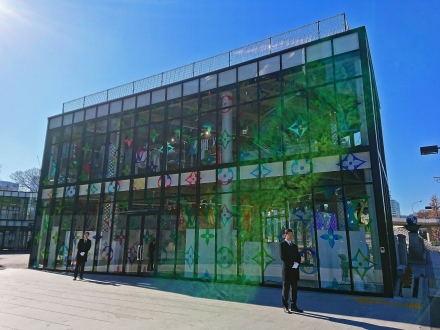 You will see it, from the train too—if you’re on the Yamanote Line heading towards Harajuku. The Louis Vuitton pop-up, all glass and steel and familiarly patterned all over, sits in sharp contrast to the nondescript buildings around it and, in particular, the verdant grounds of Yoyogi Park, just across the road. The serenity of the 54-hectare park, former Olympic village of the 1964 summer games, is surprisingly duplicated within LV’s temp store, erected to showcase—literally—the debut pieces of the brand’s star designer Virgil Abloh, now raved by the media as a “taste-maker”.

Inside, it is unlike any shop you have ever been to. But first, you’d have to get in. It’s not as easy as just walking through the front door. LV shops have a habit of making you wait, whether there is a queue or not. Sentries are there to ensure you don’t merely breeze through. Some stores, apparently, have a by-appointment-only policy and you will be denied entry without prior arrangement. Here in Harajuku, the front part of the store, where the one entry point is positioned, is manned (on the day we visited) by four suited guards. We were very politely ushered to the right side of the entrance where we were told to wait in line. Two minutes to opening, there was not one yet.

According to earlier reports in the Japanese media, entry is permitted when shoppers turn up with a ticket. These were supposed to be issued at 8.30 in the morning every day. People were told to start queuing at 6am. It seems there were those who did brave the winter morning cold to secure a ticket to get in line. According to a WWD account, “about 1,000 people queued up in the Japanese capital to be among the first to buy”. A week after the store’s 10 January opening, no ticket/keepsake, it seemed, was required since none was given to us. 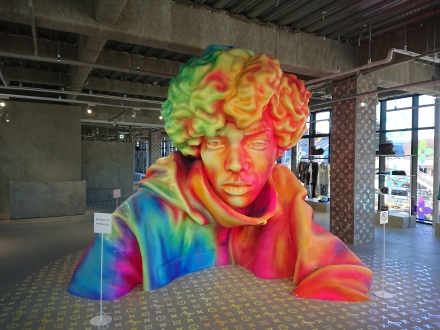 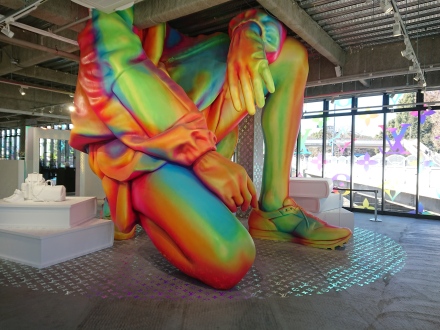 Once you’re allowed in, an attendant greets you and guides you through a fixed route so that you end up in the inner section, where rope and stanchion indicate that another queue is to be expected. Here, the first attendant hands you over to another staff member who emerges from a line-up of about twenty-odd nattily attired sales people. The second, all smiling and eager to please, shows you to the actual retail space. This person will follow you throughout your visit till you leave the store, with or without purchase in hand, which may be of little concern here since it is reported that this pop-up already rang up 30 percent more sales in the first 48 hours of its operation than any other LV launches, including the collaboration with Supreme.

This is amazing to us. The essentially concrete store (distinguished by iridescent stickers of LV logos pasted on pillars, walls, and floors) is so well presented as exhibition that it seems to encourage viewing than purchasing. To be sure, retail space is increasingly a ‘curated’ space, and many are art gallery-like. This LV pop-up is clearly no exception; it seems to mirror the Espace Louis Vuitton Tokyo, just down the street on Omotaesando. Frankly, it’s all a bit of a show-off.

Standing—to be more specific, half-kneeling—in the middle is a statue of LV model of the season, Omari Phipps, the English lad who opened the LV spring/summer 2019 show back in June last year. The space surrounding the guy’s lower half is dedicated to nothing much except to displaying Mr Abloh’s installation sense, an expensive exercise to boot. You know instantly that you had come in for the experience, if not the merchandise. 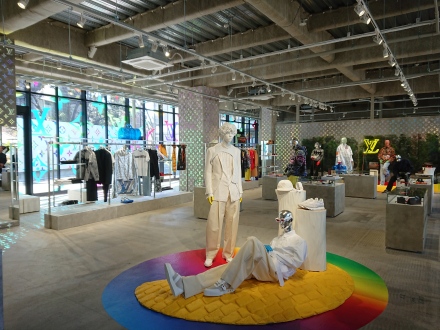 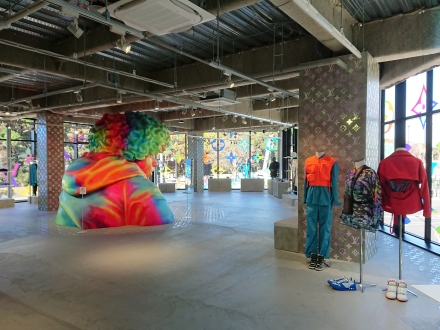 Virgil Abloh fans, affluent and not alike, will possibly go quite mad on the two of the selling floors

It is experiential, alright, so much so that the experience—allow us to repeat—overwhelms the urge to buy. This was compounded, during our time there, by the sales attendant who stayed closed and urged us to try something, anything. The eerily bare and neat fitting rooms, lined on one side of a concrete corridor that looked like it could be the set of a film about a spooky sanatorium, do not appear inviting enough for one to peel off winter layers to try, say, a T-shirt or the knit pullover (a hooded and monochromatic version of the one featuring Dorothy and co of Wizard of Oz, which we were told “is exclusive to Japan”) that the sales staff had urged us to slip into. Someone outside, on a JR train, might see us try clothes, LV notwithstanding!

Everything is displayed in such a manner that one wonders if touching is allowed. In fact, some props and merchandise are indistinguishable. Accessories, such as eyewear, bracelets, and key rings beckons from within glass cases, distancing themselves from shoppers’ desire even when they gleam invitingly. Others such as the semi-transparent, embossed PVC Keepall—“the most wanted”—are placed like precious sculptures, to be admired, not caressed. When we reached out to touch one (the blue, if it interests you), the person trailing us offered to bring one for our inspection. Such attentive service was so at odds with everything we are used to here that we didn’t feel it was natural even if it was strangely appealing. Or, was this just Japan? 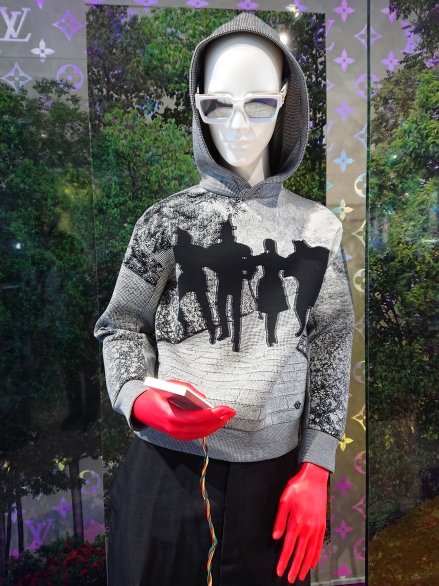 Up close, Mr Abloh’s Louis Vuitton has that hyped-to-death ‘elevation’ seen in his Off-White. Sure, the clothes and the bags and the accessories looked interesting from far, but when you consider them individually in your hands, the barely more-than-basics don’t break new ground in terms of construction or reveal a creative nous. They feel luxurious, for sure, but it isn’t certain they’d look luxurious when worn, especially on those that, had by then, started to populate the space (no more than 30 at one go, we were told), whose main aim, it appeared, was to dress like hip-hop stars. The spare, but artistically appointed setting certainly made the clothes look attractive, but once out if it, on a body not a mannequin, we can’t be sure.

Although our guide/sales staff was polite, friendly, and informative (it appeared that there was nothing about the merchandise he didn’t know), his constant presence left us no opportunity to even have thoughts to ourselves. Just as we wondered—silently—if there were any sneakers in this launch event, he pointed to a shelf with two chunky, hardware-heavy kicks and asked, undeterred, if we would like to try a pair. When we declined, he guided us to another part of the store, and introduced other items to us. When we finally decided to leave, some 15 minutes after entering, he accompanied us to the door, bowed, and said cheerily, “have a nice day”. To be sure, it was.