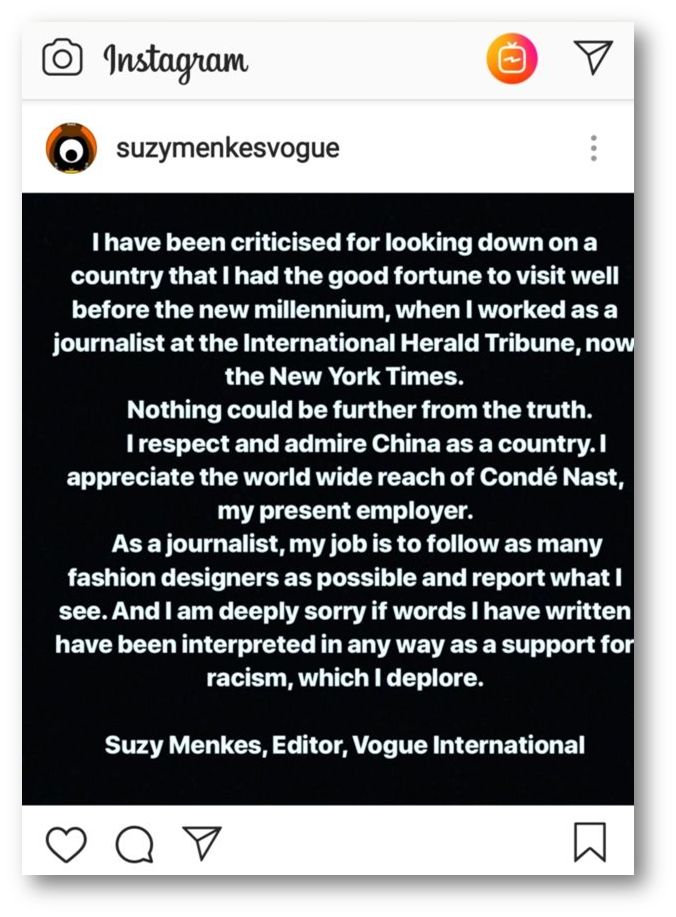 The first thing we read on Instagram this morning was the above post. Suzy Menkes took us by surprise. Usually unapologetic in her stand (in 2007, she boldly declared that “Marc Jacobs disappoints with a freak show”), she issued an apology, presumably in response to the curious review of Dolce Gabbana’s Alta Moda/Sartoria, the private (but widely shared online) show for couture clients, held in Milan four days before. The black and white IG square looks like an obituary.

Are apologies the new ‘It’ act to follow discriminatory outbursts and indiscriminate commentaries? Like Dolce and Gabbana’s video apology after the storm they whipped, Ms Menkes’s textual version came days after her review blunder. That the online culture of say first, apologise later has influenced even a writer with over 50 years of experience, culminating at Condé Nast, where she is the “the independent eye of the international Vogues”, indicates perhaps that we are edging towards a new type of morality. It is hard, for now, to say what that might be.

For many people, Mr Gabbana’s outburst is for remembering, but for the culpable, it was rather the opposite. “China is yesterday,” he supposedly told Ms Menkes, “today is another day. It’s a new Rennaisance.” Ensconced in Milan, it’s easy for Mr Gabbana to forget about what happened in China. But many people want D&G reduced to dust. Then Suzy Menkes came cheerily along.

Suzy Menkes, looking the part of the grande dame (of fashion criticism) that many consider her to be

We first read what Ms Menkes wrote on Vogue.com yesterday, and was amused by the position she took when the Dolce and Gabbana fiasco in China of three weeks ago has not really died down. She did not appear to concur with a large swath of the online fashion community that the two designers had screwed up, especially Stefano Gabbana, whose Instagram account she called “prolific”. We don’t know about you, Kim Kardashian, to us, is prolific, Stefano Gabbana borders on the profane. It astonished us that Ms Menkes would not even say that the man’s IG excesses were “controversial”, or “provocative” when, in fact, a nation was provoked.

One reader of SOTD told us that the online reaction to Ms Menkes’s review, as well as the surfeit of IG posts on D&G within a day—21 in all—was “Diet_Prada trying to kill her in their anti-DG obsession. They are very vindictive now.” By the time, we checked Diet_Prada’s IG posts/stories, the supposed attack was gone. Apparently, Diet_Panda had said that Ms Menkes is a journalist who isn’t doing her job. Did she not tread carefully, we wondered? “She did,” our follower said. “But obviously not enough for the Nazi-hunters Diet_Police!”

Entitled “A Day of Atonement” on vogue.co.uk and simply “Atonement” on her own suzymenkesvogue.com, the article stood out, in light of D&G’s troubles, for her rather unwavering support of the designers and apparent refusal to walk into the room of disdain. What had Dolce and Gabbana to atone for, she did not say. Calling the duo “chastened” twice, Ms Menkes was, as our commentator said, showing her “allegiance”—to two people she probably considers friends. Or, “family”, like “the alliance of moneyed people, many of whom enjoy the D&G events (as she did) because they become part of this family of the super-rich”, as she described the attendees. 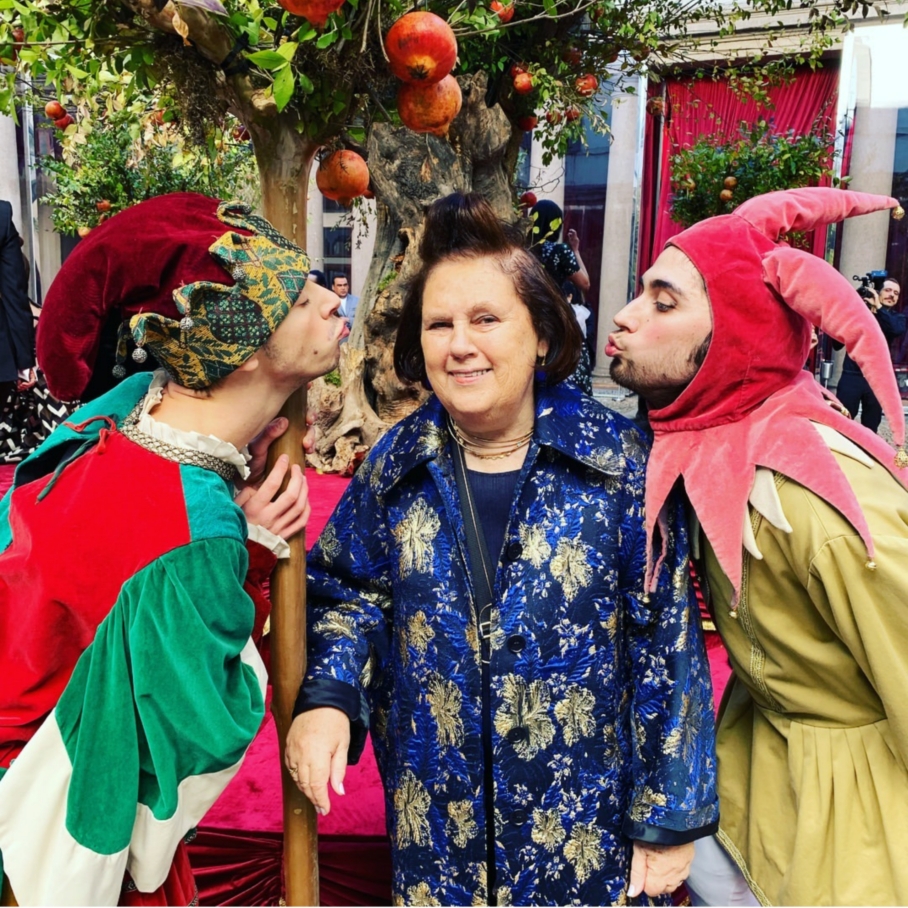 Nothing amiss there. Friends can still be friends even when their beliefs are not shared. But when she started to ask “what went wrong in China”, she, replying to her own question, said that she found it “hard to make any judgment about a show that never took place.” What went wrong in China led to the cancellation of the show. Even that she would not acknowledge, except to say, provocatively, that “the criticism over a marketing campaign… branded racist, where I would see it as insensitive and stupid.”

That remark, to many Netizens, was exemplar of insensitivity and stupidity. One commentator on her IG post even called her “a privileged white woman”. Ms Menkes seemed to have spurred that charge when, in the third paragraph of the review, she referred to China as “the Far East”, a popular blanket term during the 16th to 18th centuries that referred to lands beyond India. Perhaps we should be relieved that she did not call the world’s most populous country Cathay! As SOTD contributor Raiment Young said, “alongside ‘Editor, International Vogue’, maybe she should have added: Subject, British Empire”.

The apology Ms Menkes posted on IG was strangely rather similar to Dolce and Gabbana’s. Instead of apologising for the displeasure and unhappiness she has caused, even unthinkingly or unintentionally, she chose to say, “I am deeply sorry if words I have written have been interpreted…” White privilege? Do tell us.

One thought on “Is D&G Now Too Toxic To Touch?”