The Chinese have a saying 后悔莫及 (houhui moji) or regret is too late. Does this describe the Dolce & Gabbana debacle? 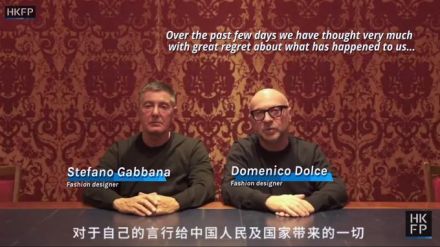 Domenico Dolce and Stefano Gabbana have apologised, three days after we wondered why they had not done so in person, issuing, instead, a statement that sounded like it came from a well-paid lawyer. Their video appearance, broadcast first on Weibo and then picked up and shared by other media outlets, looked like something conducted in their corporate meeting room not without duress.

Who wouldn’t be stressed?

Two days after what rapidly became the most frightful PR disaster for Dolce & Gabbana, China’s e-commerce sites such as Alibaba, JD.com, Yangmatou, Kaola, and the Chinese platform of Yoox Net-a-Porter have confirmed that they have stopped carrying the brand. Luxury department store Lane Crawford has similarly dropped the label that fervently celebrates their Italian-ness and made pasta-eating a marketing statement.

By now, we know Chinese consumers account for one third of global spending on luxury goods. That does not include ethnic Chinese outside China, such as the roughly 75% of the population here or about 22 million in Southeast Asia. If there were to be a real and prolonged boycott of the brand, as called for by Netizens, Dolce & Gabbana is thought to face considerable financial setback. To limit the fallout, they directed their apology to “all Chinese people in the world”.

This is not just about Chinese national identity; this is as much to do with Chinese ethnic identity

Many Singaporeans think we shouldn’t be concerned with comments not directed at us. If the world is small, Asia is smaller. This is not just about Chinese national identity; this is as much to do with Chinese ethnic identity. The Chinese diaspora isn’t unconnected. Should we, therefore, hold a brand (or individual) in any esteem for attacks on any nation and its people? What’s to stop Dolce & Gabbana from repeating themselves even if they are “certain”, rather than promise, “it will never happen again”?

Some Chinese fashion folks think the impact would not be great as they do not consider those who made the loudest noise to be Dolce & Gabbana customers. Does this mean that those who buy and wear Dolce & Gabbana are willing to accept what is considered xenophobic slights? There is, it would seem, little to be gained from associating oneself with such online bluster and not-isolated behavior regardless of how appealing their clothes may be. Not even if you had spend a fortune on the brand to get yourself the privilege to swagger on stage for what would have been The Great Show.

But was it really an apology?

More importantly, did they sound sincere? What was perhaps disconcerting was how Domenico Dolce and Stefano Gabbana firstly framed the charge of what the whole PR disaster was about: “we have thought very much with great regret about what has happened to us…” What happened to them?! If that did not sound remorseful for an opening sentence, it’s because it didn’t. When an entire nation felt insulted, one does not apologise by saying first what happened to oneself. One immediately apologises to the 1.4 billion people of China.

It is interesting that Mr Gabbana made no reference to the perceived-to-be-racist comments he made on Instagram, as if the “Not Me” reaction, plastered in red over the remarks he allegedly made to Instagrammer Michaela Phuong, was adequate in denying the over-enthusiastic lashing out at the people of China. Ms Phuong had subsequently posted five times to confirm that the chat between Mr Gabbana and her did take place. Can the fiasco blow over by simply negating guilt? Regrettably, “Not Me” is not the same as I am sorry.

Can the fiasco blow over by simply negating guilt? Regrettably, “Not Me” is not the same as I am sorry

In fact, there was no reference to the IG disaster that sealed the fate of The Great Show. To Dolce & Gabbana, they only “made mistakes interpreting your culture”. Interpretation on a private basis is very different from one made publicly—the latter comes with the social media-rare quality called accountability. In an age when we tend to glorify fashion designers and exalt those who dare say what they want, we may care less about a moment’s folly than a designer’s design fancy. It may be tempting, therefore, to separate talent from online behaviour, but we shouldn’t yield. We must not. Really.

In the video apology, Domenico Dolce and Stefano Gabbana mostly look glum, as if succumbing to social coercion that is beyond their ken. Throughout the one-minute-twenty-second take, delivered in Italian (more Chinese are likely to understand English than Italian, but to the two men, that probably did not matter), they did not use the word sorry until the end, and only in Mandarin, saying in unison “对不起 (duibuqi or sorry)”, as if they were two tourists trying to win the hearts of a Chinese host they’re meeting for the first time by attempting a feeble 你好 (nihao or how are you?). You may be amused, but are you impressed? Or, in the present context, assuaged? 服不服？

2 thoughts on “Sorry Is The Hardest Word”