Even with enough snark on the shark by now, can a film not exactly known as the height of cinematic arts truly bring back the thrill Calvin Klein once arguably offered?

Joke? Tease? Irony? After putting the images and motifs of American culture to frequent use, Raf Simons’s fascination with America—the pop, the kitsch, the dark—has lost much if its initial cleverness, even charm. Is the US still delivering so much cultural punch to Mr Simons that the best way to deliver his vision of Calvin Klein, once, perhaps ironically, a purveyor of European sophistication, is to exploit the obvious signifiers of how America had caught the popular imagination of the world?

As diagnostician of Calvin Klein’s one-time design and branding troubles, Mr Simons has been consistent in tapping into the vast repository of the images of American life—not necessarily meaningful—installed in the imagination of our mind or those from the outside who see the US as the land of the free and of greatness, weather that greatness has waned or not. He has incorporated the art of Andy Warhol, a long-gone artist, into the jeans lines; used the brand’s recognisable name/font as box logo; and re-imagined the Western (cowboy) shirt as fashion article of the highest order that even the FLOTUS couldn’t resist.

Thankfully, that shirt did not appear in the spring/summer collection, but something else did, something as unconnected to a higher form of anything: the 1975 film Jaws. And not as clothing more compelling than T-shirt and tank tops, on which the not-scary-anymore great white shark in attack mode appeared, as seen in the movie poster. Using marketing visuals is an extension of Mr Simons’s own line: Remember last season’s Peter Saville-designed New Order album covers? (Mr Saville also redesigned the Calvin Klein logo.) Mr Simons had admitted that Jaws was a film that had somehow impacted him. And it is now the inspiration behind the latest looks, sporting not only the image that those old enough will remember, but also including ideas built around the effect of a shark attack.

That means pleated skirts with front portions lobbed off as if the titular character of Jaws had enjoyed a big bite of them, crushed or crumpled fabric treatment that could have been the result of emerging from the terror, and even hair that looks like the aftermath of struggle-swimming to safety. If you need more, there are those skirts or hip-wrappers (?) that were supposed to look like the upper part of scuba wear peeled down to the waist after use. If only James Bond had thought of it too, he would not need to abandon his scuba wear on the beach as he always does. Are these seaside terror ideas commentaries on the predatory tendencies of the American presidency (and indeed America)? Or, might this be fashion that the FLOTUS could use to win the attention of her Shark Week-loving husband? 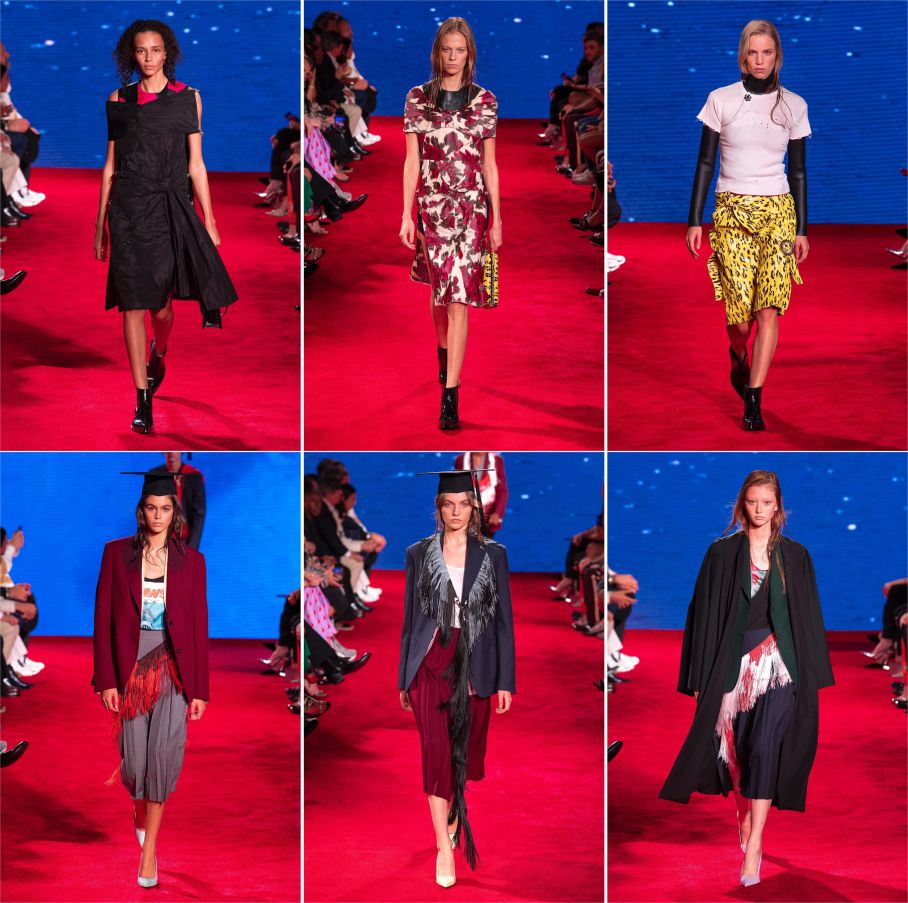 Jaws was not the only film that informed Mr Simons. There was also 1967’s The Graduate, which explained the ridiculous presence of mortarboards and pseudo-academic regalia that, frankly, look out of place in a non-academic setting, conceived without wit to include a forbidding sea and the hint of spilled blood. The thing is, some of us are tired by repeated references to American anything: the Wild West, pop art, and even those civic heroes, such as the hi-vis get-ups of last season’s prairie-lasses-who raided-the-fire-station duds. So much so that we now find what the media calls “American vernacular” so tiring that even vaguely interesting add-ons such as those fringed sashes/shawls with an indeterminate print that could have been (again) blood, looked, past the third time, ho-hum.

Mr Simons did have a way with dresses—mainly the shift, vaguely ’50s (more so with the admittedly lovely pointy-toed heels), adequately avant-garde, and, some, sweetly printed. This the kind of femininity Mr Simons excels in, and it would have worked successfully without the dispensable holsters/harnesses that looked a little too late, post-Virgil Abloh @ Louis Vuitton anyway. Europeans, we understand, love America possibly for the same reasons Americans love Europe, or going to head European houses. But Tom Ford, making a name for himself at Gucci, did not try to be too European. Why has Raf Simons utterly succumbed to the America of popular taste? Or is the renamed and extra long Calvin Klein 205W39NYC a reflection of what American fashion will become: superfluous?

One thought on “Finally, Plucked From The Jaws Of Americana?”