The interior of the Bijan store in Rodeo Drive, Beverly Hills

I must say, Malaysians have a sense of humour. When it was recently revealed that among Rosmah Mansor’s stash of Birkins were Bijans, they wondered if Bijan is the disgraced former PM’s own luxury brand, since the name is Najib spelled ke belakang. Such clever anagram busters they are too! But the accidental semordnilap (word which makes sense when read backwards, but has a different meaning when read forward) aside, Malaysians, it seems, have forgotten that bijan in Malay means sesame seed!

Sorry to be such a wet blanket, spoiling the awe (or disdain, depending on who you ask) our northern neighbours hold for the ex-chairman of 1MDB’s and his wife’s luxury possessions with one of the oldest-known oil-seed crop. I am sure Ms Mansor wouldn’t be too pleased that I have compared her expensive handbags with bijan, but since her husband was fond of weighing in on the country’s economic woes with the falling prices of kang kong, perhaps she can appreciate that I have picked a dearer cultivar.

The handbag cache that Ms Mansor horded comprises so numerous a tas tangan that they were, according to Malaysia’s Federal Commercial Crime Investigation Department (CCID), time-consuming to count, just like a bag of bijan. Reports in the local media cited some rather staggering CCID figures: from six residences (12 locations, according to some reports), 567 handbags—with the combined value of RM51.3 million—were seized during the operasi, and 37 luxury brands were identified. It is interesting that the Bijan bags were highlighted instead of the Birkins. Apparently, journalists at the news conference even had to ask how the brand is spelled (as in the benih, I imagine the authorities replying). I say the Malaysian authorities do have a nose for news. 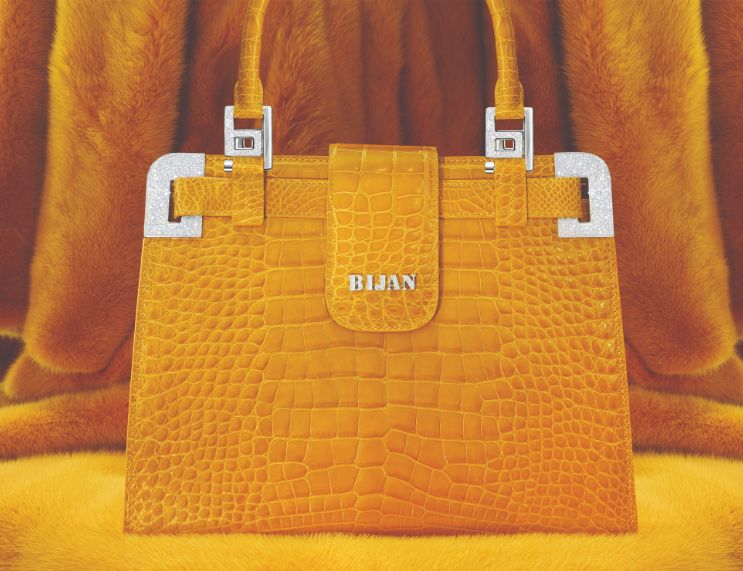 When I first read this in The Star (the paper that also reported Bijan was “Wednesday’s top search on Google Malaysia”), the first thing that came to my mind was perfume. To be exact, a particular fragrance housed in a doughnut-shape bottle with a loop on top that looks like a ring grip of a baby’s soother. Bijan the perfume was, in the mid-’80s, very much on trend; it was a particularly heady scent (they were mostly strong-smelling in that decade—remember Yves Saint Laurent’s Opium or Christian Dior’s Poison?). The advertising, I recall, always featured owner Bijan Pakzad himself, in a sweatshirt bearing his first name, in a surprisingly unabashed, somewhat tacky self-promo that was rather unusual for a time before Instagram. The main man, to me, looked like a less noble Oscar de la Renta.

In the US, Bijan Pakzad was not known by his family name. As the media reports of that time went, he was an Iranian who had started his fashion career in Tehran in a local boutique called Pink Panther. Coming from a wealthy family (his father was said to be an “industrialist”), he was eventually able to go to school in Switzerland and Italy, where he “studied design”, according to the New York Times. He eventually moved to the United States (this was pre-Trump!) in 1973, and settled down in Los Angeles. Bijan, a boutique that catered to men with all the money in the world but little discernment, opened in Rodeo Drive in 1976, the year two Steves founded a small company called Apple. It was never clear how Mr Pakzad could invest in this extavagantly-appointed, by-appointment-only store, but in no time, he was able to lure rich and powerful men to Bijan, like sheikhs to a harem.

Unless you were a White House resident or, at least, a habitué, chances were, you’d never have stepped into Bijan. News coverage in later years revealed a yellow-walled, Mediterranean-style, double-storey store, where—in particular, on the second floor and on one wall—framed photographs showed who and who had been, and still were, the store’s customers. Unsurprisingly, they were headline names, including the Shah of Iran, Hollywood bigwigs, and too many American presidents to count. Among them the Bush clan—so regular they were as customers that one of the fitting rooms was decorated to honour them. I didn’t think there would be men who need to feel so important that only a Bush fitting room would do, but apparently there are.

Bijan was very much an ’80s brand and it reflected the era’s admiration for cash, more than dash. In case you miss the store’s air of moneyed exclusivity (and you likely would), a yellow (their corporate colour) continental car—often a Rolls Royce—is always parked in front of the main door as mascot. Inside, you only get to step in when arrangements have been made. Everything is laid out in a way that would have made Ralph Lauren quiver: over-the-top, or, think chinchilla bedspread as a throw. If you are lucky enough to be invited upstairs (past the chandelier dangling with filled Bijan perfume bottles!), you would be shown to a series of doors. Behind them, looks put together by colour, including matching fresh flowers and fruits, beckon. These are dioramas of lifestyle choices even super-rich you never thought you’d adopt, until now.

Bijan perfume ad, featuring the man himself, in publications such as Vogue

For over 40 years, Bijan sold mostly (unattainable) men’s wear, jewellery and fragrances (for both men and women). Three years after he died in 2011, aged 71, Mr Pakzad’s son Nicolas, who now runs the business, launched a made-to-order line of handbags fashioned from what merchandisers like to call “exotics”—in this case, alligator skin. Bijan does not reveal prices and on their website, an ‘inquiry’ button is available for the curious to click on. According to the Los Angeles Times, the bags with palladium hardware retail for about USD65,000 and those that come encrusted with diamonds on the fastenings, USD175,000. It is not made known which Bijan bag (or bags) is part of Ms Mansor’s koleksi, but it is not hard to figure out how CCID came up with the RM51.3 million estimate—a sum, I imagine, susah sangat for Malaysians to swallow.

The name’s sudden appearance in the context of the CCID investigations into the 1MDB scandal comes not long after Bijan, too, caught the attention of Americans. Like their Malaysian counterparts, when the name Bijan was suggested, Americans drew a blank. According to media reports, Paul Manafort, Donald Trump’s former campaign manager, now indicted for numerous crimes, had spent a huge fortune on clothes with his source-dubious money. Associated Press, followed by many other media outlets, reported that he dropped more than USD500,000 in “Vendor H”, later identified as a “Beverly Hills clothing store”, and speculated by sharp readers to be Bijan. Nicolas Bijan Packzad had refused to reveal the store’s clientele, even when on that wall, famous names still show who came by to shop.

To be sure, despite its prohibitive price tags, Bijan bags will not yet share the same prestige and resale value as the Birkin. The Beverly Hills store may bank on its reputation as “the most expensive store in the world”, but basking in such an estimation is surely of questionable taste. High price, as we often see, is not necessarily a barometer of haute. If Bijan is the pinnacle of fashion, surely there would be no need for many to use Google search to uncover its provenance. In 2016, Bijan was sold for USD122 million to LVMH. Perhaps, it can now be on its way to scaling new heights. While it is not known when Rosmah Mansor first laid eyes on a Bijan bag, I think she is a clever consumer of luxury after all.