The joy of Jacquemus: This is easily one of our favourite collections of the Paris season, if only for the ease of the clothes—unaffected, consumable ease. Jacquemus has not really been known for such straightforward styles. Sure, they had been largely wearable, and designer Simon Porte had steadily remained au courant, dabbling with concepts more judiciously than those disposed to sprinkling sequins. This time, there’s perceptibly more: no fuss, no excess, no ambiguity. The young label delivers an immensely likeable collection that will be welcomed in many wardrobes.

This season, Mr Porte’s Jacquemus, a moniker that is derived from his mother’s maiden name, took a trip to Marrakesh and soaked up the souks. Back in Paris, whatever Mr Porte had gleaned was given a left-bank spin. This isn’t to say that Jacquemus is handing us Yves Saint Laurent, who, enamoured with Marrakesh, had made this part of North Africa his second home. In fact, it was, to us, exhilarating that almost nothing pointed to YSL, the label or the man. Sure, there was a hint of the Seventies—those shirt-dresses!—but the allusion is hardly the neo-beatnik influence that weighed rather heavily on Mr Saint Laurent’s output in his heydays.

Instead, Mr Porte seemed to build his collection on the definitive Northern African garb: the caftan. But he did not create any self-limitations by restricting himself to one garment. The show opened with a caftan-as-shirt-dress, and, while versions of that did appear later, it did not set the tone for the collection, nor characterise it. Instead, Mr Porte explored the idea of a relaxed silhouette with pieces—dresses, shirts, even coats—that, while roomy, still skim the body in an alluring manner, much like lounge wear, but smarter and deserving a place outside the home.

There’s a refreshing slinkiness to many of the styles, a seductive hang, but nothing too clingy, and certainly not adhering to overly laid-back languor. The generally long lengths are proportionately matched to comfortably fitted bodices and adequately capacious sleeves. No subversive twists! These are clothes that you slip into, forget about them, and go about your day, and you do so without a care about whether you’re going to look too dressed up, or, worse, too foolish. Fashion needs such built-in confidence and locked-in flair so that a woman knows the minute she’s dressed that she is ready to face the world beautifully. 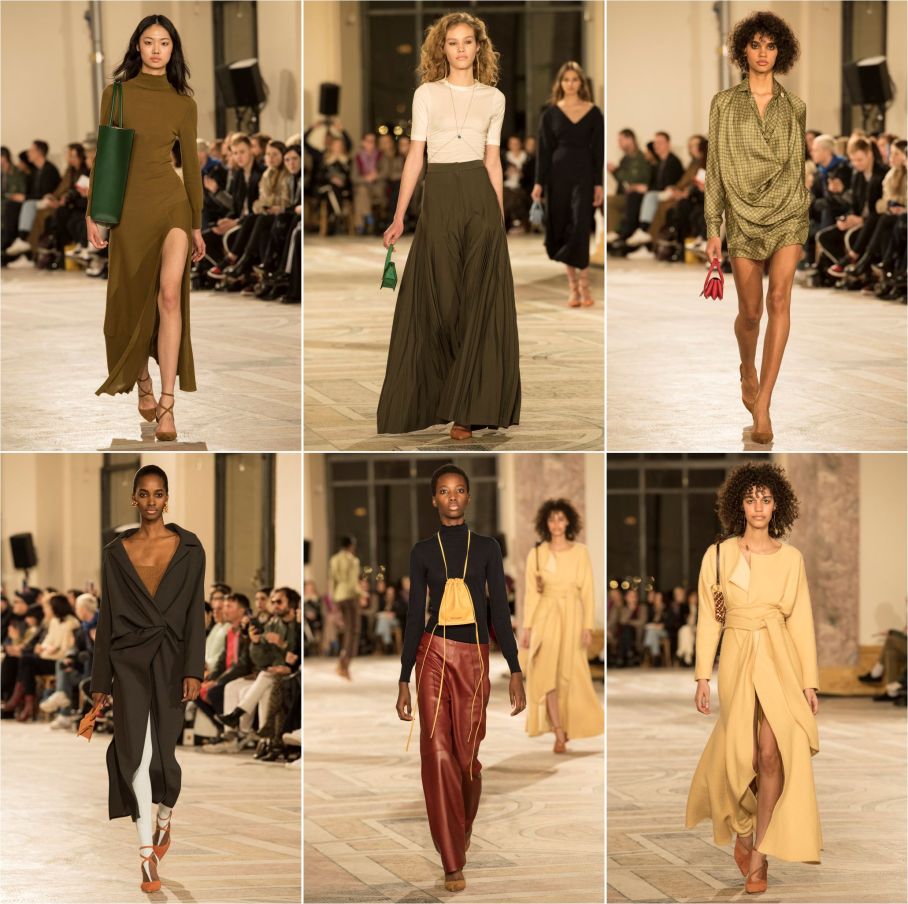 We are partial to the drop-waist shifts; the dramatic cowl-front shirts; asymmetric tops that refocus the otherwise centric openings of the garments; hybrid jackets that seem to be wedded to a cape on one side; knit skirts with fold-down waists that look like skewed corsets; the quirky, floating lantern hemlines of skirts, and so much more that it is hard to say there is anything we do not like. And those shirt-dresses: they would put Diane Von Furstenberg in a re-think mood! The colours, too, captivate. They’re not the spice colours of the souk, as you might expect, but dusty, aged shades of brown, green, beige, and sand that you might find in an old Maghreb book of illustrations.

How well a collection works can sometimes be discerned on the models. The Jacquemus girls emerged genuinely pleased to don the clothes, and there was a palpable sense of pleasure, to the extent that when the girls stepped out in the finale smiling, with a spring in their steps, you, too, wanted to stand up and join them in their sprightly strut. Jacquemus proves that wearable ease is not a bad idea in fashion. And carrying a nifty handbag makes more sense than a severed head. These are, happily, the stuff of sartorial joy. And, perhaps, the making of the comeback of chic. Fingers crossed.

One thought on “The (Possible) Comeback Of Chic”