After last year’s Fraktar bag hack, is the nondescript and omnipresent plastic supermarket bag the next big thing?

Ten years ago, a dear friend of mine gave me a birthday gift that came bundled in a pink plastic bag, typically used by vegetable sellers—yes, the wet market staple. To be sure, he wasn’t a fashion forward type although he worked in fashion his whole life. And he definitely did not have a crystal ball to see a decade into the future, when anti-fashion fashion has taken root in fashion, and spawned fashionable bags with a provenance that can be traced to sellers of fresh comestible.

That the lowly plastic market (and supermarket) carrier can now have fashion cred may be attributed to our predilection for choosing low to yield high. Does the T-shirt not come to mind? Let’s, for convenience, put the blame on Demna Gvasalia, that provocateur-in-chief at the house of Balenciaga. He had picked common bags—for example, those usually associated with mainland Chinese moving vast quantities of city goods back to their rural homes during festive seasons such as the Lunar New Year—to make them into high-end, covetable carriers. It culminated in the re-make of Ikea’s Fraktar tote—in leather, of course—that could be seen as Mr Gvasalia doing a DHL for the equally humble shopping bag.

But that wasn’t the last of the common bags that Mr Gvasalia has given a luxury spin. Last month, his Balenciaga launched the “supermarket shopper”, an undisguised shopping bag not normally associated with fashion once steeped in the tradition of couture. The thing is, it isn’t yet clear if a leather “supermarket shopper” will have the same impact on popular fashion the way Celine’s leather shopper did back in 2009 (which predates Balenciaga’s own leather ‘Shopping Tote’ by eight years).

Brands are following Balenciaga’s lead. But rather than leather, plastic is presently king. Phoebe Philo, as a parting shot perhaps, created plastic supermarket bags to be sold as merch rather than for you take your in-store purchases home in one. Just a month ago, Raf Simons, too, got into the act, and released a see-through version (called, what else, RS Shopping Bag!) with Voo Store, one of Berlin’s most progressive multi-label fashion retailers. Mr Simons’s version is clearly pitched as a collectible, not to be used when you next go shopping and you want to play eco-warrior. The plastic supermarket bag has achieved It bag status, which, admittedly, now sounds rather quaint. 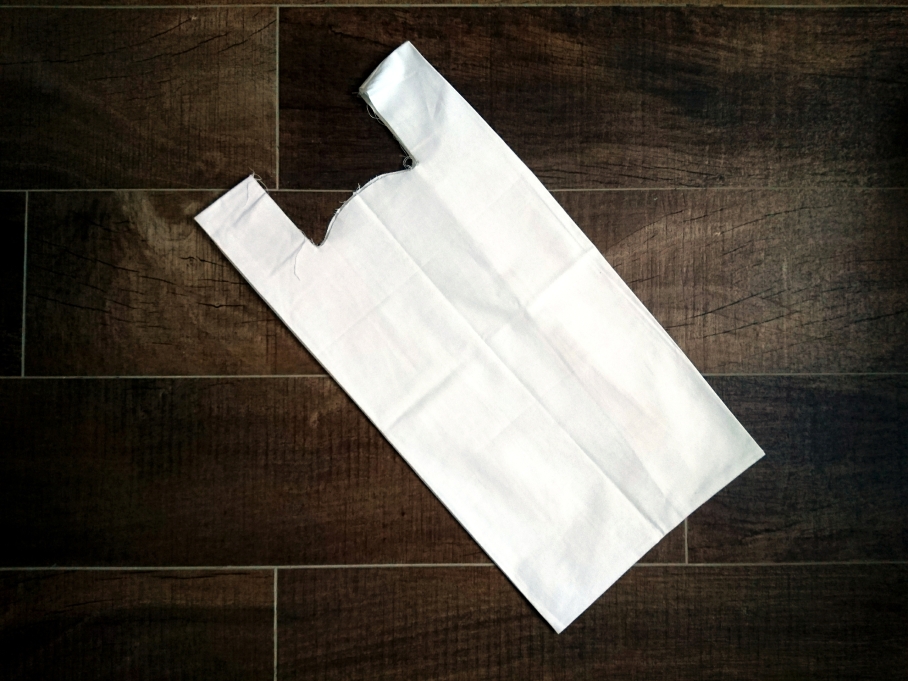 The nondescript store bags given to shoppers at what was once Maison Martin Margiela. Their version is not tubular, with stitched hems on both sides of the folded gusset

The nondescript store bags given to shoppers at what was once Maison Martin Margiela. Their version is not tubular, with stitched hems on both sides of the folded gusset
Like many fixations of fashion designers, this one isn’t terribly new. For the longest time, Maison Martin Margiela, pre-John Galliano, packed your purchases into supermarket-style shopping bags in white cotton that was akin to calico. (A leather, for-sale version was also released under the sub-line MM6.) I can’t tell you convincingly enough (now that such bags are a fashion item) how surprised I was many, many moons ago when I was presented with that bag after buying an MMM leather jacket at its Rue de Richelieu store in Paris. Surely they could do better, I had thought. But there was something decidedly appealing about the idea of a luxury item housed in a non-luxury bag that I found myself traipsing the City of Lights for the rest of the day in this plain and un-labelled sac with some satisfaction that I can’t quite describe now. A wink-wink moment perhaps. Was this how Mr Gvasalia had felt when he thought of the shopping bag for Balenciaga? Or was he being nostalgic of his days at the influential house?

The supermarket shopping bag—not as article of fashion—has a rather long history. According to popular telling, the grocery bag that we know so well was invented by Swedish engineer Sten Gustaf Thulin in the early 1960s. What Mr Thulin had in mind was a one-piece bad that can be formed by folding, welding and die-cutting a flat tubular plastic. This he did for Celloplast, a Swedish company known for producing cellulose film and for processing plastics. Celloplast was quick to patent the making of the plastic shopping bag and the rest, I think you’d agree, really requires no detailed recounting.

Shoppers in Tokyo are often seen with shopping bags attached to a carabiner that’s hooked to a belt loop. Here, a velvety plastic bag from retailer Bayflow that’s printed with a message: “Respect nature, respect fashion. Stay healthy and simple, comfortable and beautiful.”

While the bag of our current interest has been mostly associated with the wet market and the supermarket, versions in more durable nylon and with attractive prints started to appear when retailers discourage shoppers from using the plastic versions as they are not biodegradable and will add to the woes of inadequate landfills. Some cities such as Hong Kong and Taipei started charging customers when a plastic bag is required for their purchase. With demand for bring-your-own-bags rising, many bag manufacturers started producing reusable, washable, and long-lasting nylon shopping bags that can be folded neatly into a little package no bigger than a wallet.

In Japan, Tokyo especially, not only are these attractive bags available in supermarkets, they are sold in stores such as Muji and Uniqlo and trendy shops such as Beams and Urban Research. The basic shape is the same no matter where you find them, but there’s where the similarity ends. Patterns are almost always the eye-catching part, but, for me, it is how the Japanese carry them that I find so fascinating. Many guys have them secured to their waist with a carabiner. Some would tie them to their bag straps in a way that can only be described as fetching. Once, in Tomorrowland, the multi-label store, I saw a woman with a black nylon shopping bag. Nothing terribly interesting in that except that she had one handle looped over the other, which was slipped on to her wrist. There was something terribly artful in the bag-and-wrist composition. It reminded me of the Japanese azuma bukuro, a traditional cloth bag that—at least in Japan—is anything but ordinary.

The myriad colours and patterns cheerfully offered at Seoul retailer Åland, as seen in their Bangkok flagship store

Today, fancier shops call them “marché (which is really French for market) bags”. At Muji, their version is labelled as “tote bag”, which adds to the mild confusion. The thing is, these fancy takes on the supermarket bag are not likely going to be seen in the likes of Fairprice. But where would you carry them to, then? Except at Ikea, home of the Fraktar, few retailers in Singapore discourage you from expecting a store-issued shopping bag, for free. In fact, at many supermarkets, shoppers are known to ask for more than they require. When will this habit be shaken off? When will the use of our own unique shopping bags be a common sight?

Or perhaps the structured, hardware-festooned bag of unambiguous designer standing is over. Who even remembers the Baguette now? Isn’t 1997 a long time ago? This is the era of Vetements, the time of looking at seemingly commonplace, unremarkable things to make them objects of desire. This is, after all, the age of the sweatshirt made good.