The new husband-and-wife co-designers at Jil Sander have decided to keep the quiet at the house they’re now in charge of, so much so that momentarily you sense it’s on the verge of the monastic. Not that that’s a bad thing. Luke and Lucie Meier (above) offer such a palate refresher of a collection in the wake of eye-popping clothes at other major Italian houses that their debut truly stands out for being able to do more with less.

Does it matter then that, for many fashion consumers presently, these clothes may risk coming across as boring? Probably not. The Meiers are so determined to stay true to the by-now-forgotten minimalism of the brand that they reportedly met Heidemarie Jiline Sander, the German founder herself, before putting the spare-but-not-quite collection together. 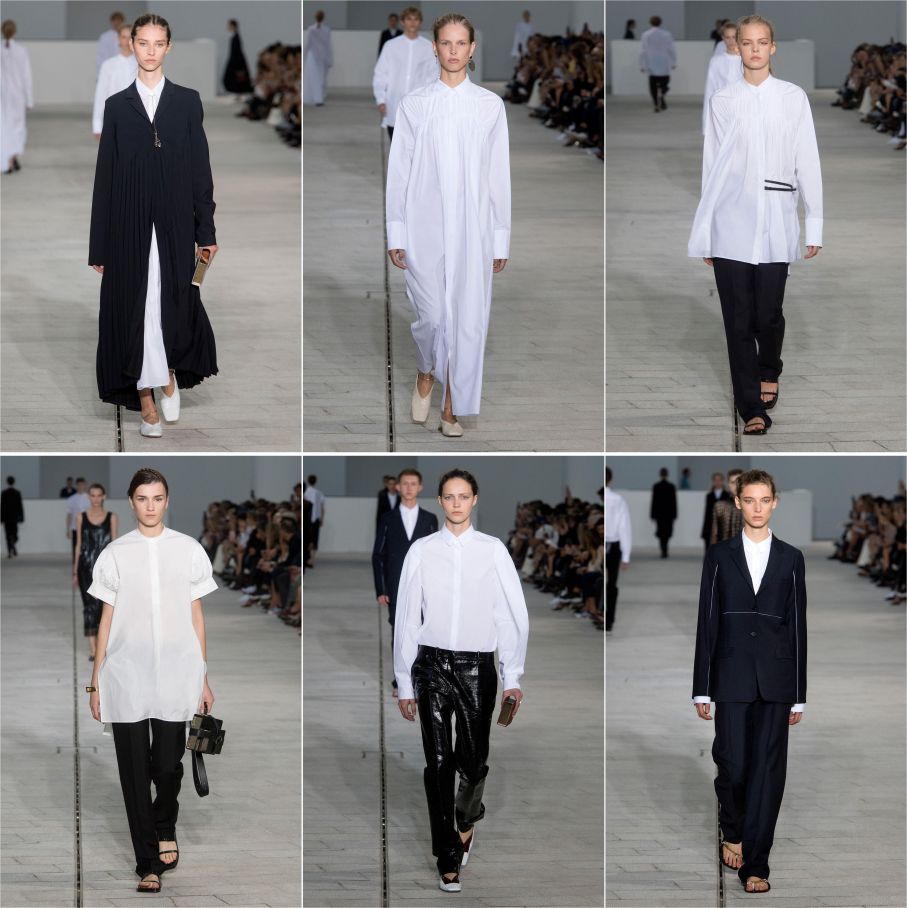 The presentation opens with rather ascetic white, as well as back and white sets. The suits have a familiar silhouette and cut, although many would associate it with Raf Simons who was at Jil Sander for seven years; and the white shirts, once so much a signature of the brand, have a lightweight appearance about them—more appealing now that global warming is not only real but palpable. Just as you thought the show would be monochromatic all the way, the Meiers introduce shots of colour, not quite the bold chromatic outings of Mr Simons, but colours that show a particular taste, and possibly quirk: one indescribable blue and those mustardy shades.

We are enamoured with the possibility of the nightshirt as day and evening dress (even if, admittedly, Raf Simons had explored the idea at Dior), the treatment of sleeves and the unusual volumes (particularly the puffed version with the wide cuff deliberately unbuttoned), and the colour-block knitwear (clearly ‘easy’ but also ‘designed’). We also noted the playful elements such as blanket stitching (on the men’s wear) and the ultra-long fringing that tails what looks like macramé-style knit tops.

Now based in Milan, Jil Sander was established in 1968, the same year Calvin Klein opened a coat shop under his name which, consequently, enjoyed the description “and the rest is history”. Jil Sander the brand saw its founder serve three tenures as designer before finally bowing out. After the Queen of Less, as Ms Sander was often called, three other designers have tried to restore the brand to its former glory before the Meiers were brought onboard, but it was Raf Simons who was able to convincingly give the label the intellectual rigour it gained under Ms Sander, masterfully maintaining the brand’s heritage while elevating its poetic femininity when he held the creative reins between 2005 and 2012.

Although the first successor Milan Vukmirovic, former Gucci design director under Tom Ford, created a commercial collection, he did’t quite make Jil Sander sublime enough for an audience that had begun to gravitate towards something less spare. Before the Meiers, Rodolfo Paglialunga, ex-Prada, rejuvenated Jil Sander and had, to us, created a very appealing interpretation of the brand with rather imaginative cuts and styling. “He is the most fitting designer to write the Jil Sander story,” said CEO Alessandro Cremonesi at that time, but sadly, in about a year’s time, few wanted to read that story, fewer still when Gucci’s came to overshadow it.

It is possibly a better time for the Meiers now. The protracted flashiness of the Milan season seems opportune for the emergence of a counterpoint, an opposite of ostentation. Minimalism has been so regulated to the annals of history that some people associate it with ‘normcore’, that short-lived trend when fashionistas became bored with fashion and adopted something un-flashy and deliberately everyday in order to stand out from the competitive peacocking that has come to be synonymous with modern style.

We like what the Meiers is proposing for Jil Sander: the near-hush of the collection, the off-beat colours that are rather Milanese, and the sometimes playful sum of parts that hints at a more intelligent and less brash approach to dressing.  There is a reason why the casting of the show did not include any Jenner or Hadid. Yes, we like.

One thought on “Still Quiet At Jil Sander”