Two days ago, it was reported in the British press, followed quickly by the world’s mass media, that David Tang—actually, Sir David Tang—has died. Many people, I think, reacted to the news with regret, but some with relief, and others resentfulness. Mr Tang may not mean much to us here, but in England and Hong Kong, where he split his time, he was quite an eyebrow-raising, nothing-can’t-be-said figure, or “obstreperous”, as the British wit Stephen Fry described his friend, who once proclaimed in mutual admiration that “there’s no greater ‘Emperor’ of Twitter than Stephen Fry.”

An impenitent bon vivant, Mr Tang was born into wealth in 1954, but, according to him, wasn’t entitled to the fortune of the family, considered by those who know of such things to be Hong Kong’s most philanthropic. As he recalled in the Financial Times, a paper in which he had a regular column as “resident agony uncle” (in 2016, the articles were compiled into a book, Rules for Modern Life), “my grandfather was very rich in colonial Hong Kong, [but] he did not like my grandmother, his first concubine, nor her only son, my father. All of us were cast out of the family home and left to fend for ourselves on a very modest income that my grandfather reluctantly provided.”

Still, he was able to go to England to study even when, according to reports, he spoke no English in the beginning. He did well in boarding school and eventually studied philosophy at King’s College and graduated with honours, followed by law at Cambridge, where he received a master’s degree. For a year after tertiary education, he taught English literature and philosophy at Peking University, where he was supposedly paid 600 yuan a month!

Academia was, however, not really his calling. Cuban cigar-smoking Mr Tang became known, first as the man behind the expensive and private China Club, and then, in 1994, as the unlikely fashion hero behind the emporium revival, Shanghai Tang—a store and “luxury” label that salute Chinese design aesthetic (particularly Shanghainese) with a nod to the modern, predating the Hermès-backed Shang Xia. Both these businesses would quickly thrust Mr Tang onto the international stage, and he would soon make friends and party with fashion luminaries such as Naomi Campbell and Kate Moss.

Without prior fashion cred, Mr Tang’s success, for many industry watchers, was startling —and maddening. In the mid-Nineties, Hong Kong designers such as Benny Yeung, Lulu Cheng, and William Tang barely made a dent in the international fashion scene. Yet, Shanghai Tang’s coquettish cheongsams (in the 2000 Wong Kar Wai film, In the Mood for Love, Maggie Cheung wore stunning versions designed by William Chang and made by the store’s master tailors) and relaxed kungfu jackets with fluorescent-bright lining were drawing attention even more than the glamourous output of established Hong Kong names Walter Ma (husband of the renown retailer Joyce Ma) and designer-to-the-Canto-stars Eddie Lau.

Shanghai Tang was the first store in the Fragrant Harbour that was unabashed about inspiration drawn from Chinese culture and production centred in China (at one time, its label was printed with the tag “Made by Chinese”). It debuted on the first storey of Central district’s Pedder Building, then known for its factory outlets in the upper floors. I remember one particular Label Plus that had Prada and Valentino, among other brands, as well as clinics of GPs as incongruent neighbours. Despite the somewhat down-market tenants, Shanghai Tang, with its (almost) gaudy window displays, is a synergistic match with Pedder Building, the last surviving pre-World War II edifice on Pedder Street, where luxury shoe emporium On Pedder got its name.

My first visit to the original Shanghai Tang store was in 1998, less than a year after Hong Kong’s news-generating return to China. Walking in, I was surprised by how ‘pop’ it looked despite its Art-Deco-on-the-Bund elegance, and by the predominantly Caucasian and foreign shoppers. Hongkongers in the mid-Nineties were very much like the mainland Chinese of today. Oriental styles, no matter how modernised, held very little appeal to them. With the Landmark across the street offering the best of French and Italian labels, Shanghai Tang’s style de Chine was, at best, kitschy. It projected very little snob appeal to those who needed and used imported fashion as a symbol of advanced economic and social standing.

I remember buying a pair of cuff-links that were two workable miniature quartz clocks, with Chinese numerals on the dials, which, in hindsight, the white clientele must have found exotic. Apart from the cuff-links, I saw nothing terribly enticing to buy. Truth be told, much of the merchandise were so immodest in their Chinese-ness that even the frog buttons on simple office shirts would appear contrived back home, where Giorgio Armani was the epitome of modern chic. If TVB series were to be believed, changshans and cheongsams were worn on festive occasions in Hong Kong, but over here, I knew that anything that hinted at traditional Chinese dress would only elicit unwelcome comments.

I revisited Shanghai Tang about a year later. It was curiosity rather than desire that dragged me there. This time, it was in New York. The store was situated on Madison Avenue, one stretch of the city that was home to American names such as Calvin Klein, and, possibly to its disadvantage, across from Barney’s. By now, the day-glo zeal of the brand’s colour preference has reached a level only pre-schoolers won’t get a headache from it. And China’s pre-revolution glam sat incongruously with its Cultural Revolution kitsch. I was not sure what Shanghai Tang was bringing to New Yorkers other than a bit of colour Mao’s China did not enjoy. Or, maybe, Mandarin-collared polo shirt! It was, to me, one big, multi-storey, 12,500-square-foot, (reportedly) USD$2.7-million-a-year joke. 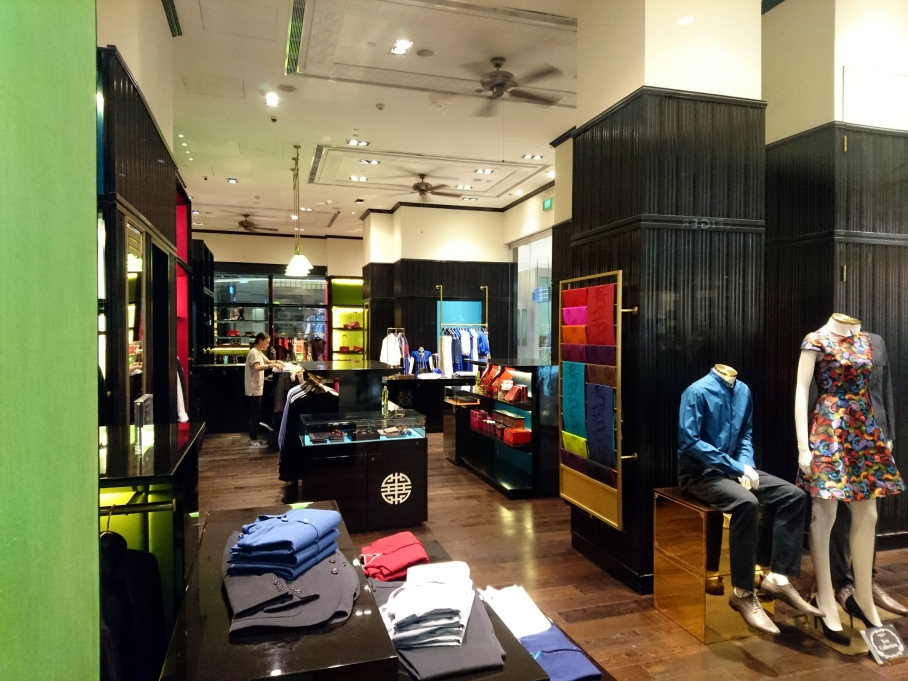 The interior of Raffles City’s Shanghai Tang, where the colour lime green is never too far from the corner of the eye. Photo: Gallery Gombak

Not parked on the Hermes side of the retail continuum, Shanghai Tang did not quite score with the Americans. Nineteen months after it opened, David Tang’s beloved emporium was shuttered. Unless you lived in the Upper East Side, I doubt many New Yorkers today remember Shanghai Tang’s sojourn in their city. In Hong Kong, people still remember the Shanghai Tang of the mid-Nineties, to the point that the gaudiness of the past still informs many what the brand is about today, even when it has moved to a more contemporary spin on Chinese designs (the lime green is, sadly, still around). To Mr Tang’s credit, changshans and Mao jackets with fluorescent-coloured lining became much copied. They were even available at Yu Hua Chinese Emporium in Chinatown.

David Tang, by his own admission, ran Shanghai Tang for seven years. It is not quite clear if he designed during those years. The brand continued to maintain its presence in Hong Kong and the mainland. At one point, there were 32 Shanghai Tang stores in the world, including Singapore, Bangkok, and Tokyo. Today, most of it is in China, and the only store in the US is in Miami, in the Mandarin Oriental Hotel. I do not think the fashion consuming public took Shanghai Tang seriously, nor, for that matter, the fashion establishment. In 1998, Swiss luxury group Richemont (Cartier, Montblanc, Alfred Dunhill, and others) took a controlling stake in Shanghai Tang, and acquired full ownership in 2008. In June this year, the store was let go to Alessandro Bastagli—mostly described as an “Italian fashion entrepreneur“—and Hong Kong-based private equity fund Cassia Investments.

It isn’t clear yet where the new owners intend to take Shanghai Tang and onto what level (still “affordable luxury”, as the founder himself once described his brand?). I think David Tang wanted to create something more snobby—his China Club certainly was—but Shanghai Tang was too modern-clever and irreverent for it to really go higher than what Mr Tang aspired to. He told Financial Times in a video interview (interesting that they would feature one of their own columnists): “It’s important to be elitist in a way because when you have elitism, the bottom bits can come up.”