It’s been a long journey, across three cities/continents, but it’s here at last. Dover Street Market, the retailers’ retailer, opened last Saturday to the delight and the spending power of its fans, but is it a twin of the famed London, Tokyo, or New York store? 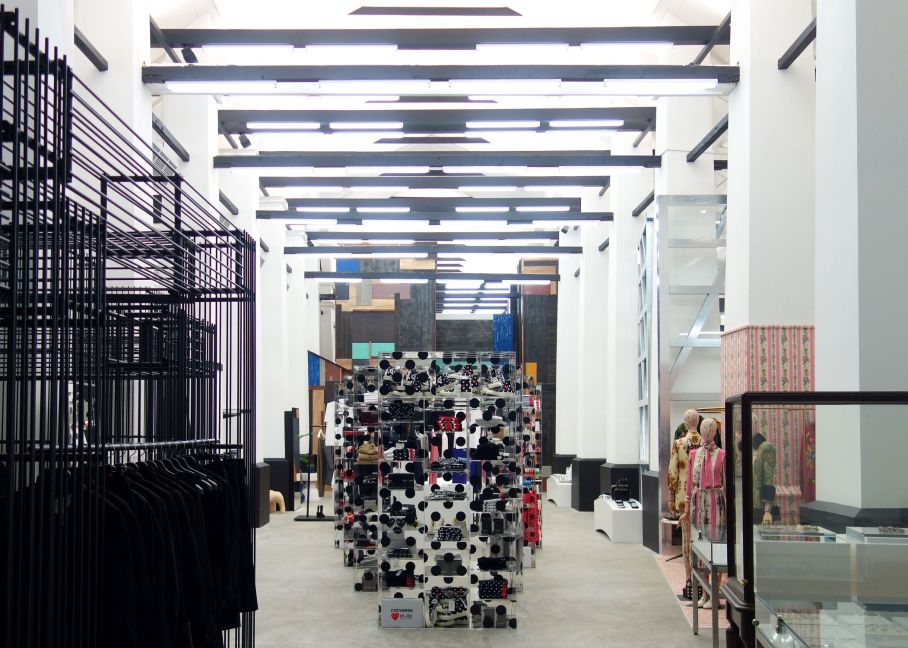 The queue to get in on opening day of Dover Street Market Singapore (DSMS) in Dempsey last Saturday was reported to be so long (“longer than the Chanel queue at Ngee Ann City”, according to one irate shopper) that those not desperate enough to get in were texting friends to say they were waiting at nearby PS Cafe for the throng to thin. We received such a message at about four in the afternoon, five hours after the store opened to the public. A day earlier, a preview for VIPs, “special Club 21 members”, and members of the media also saw a snaking line outside the main entrance of the building, prompting one guest to say it was “sheer madness”.

The queue also started to form at midnight before the store’s opening on Saturday morning. It was known then that DSMS was to release some limited-edition sneakers, such as Clot X Nike Air VaporMax and the Nike Mars Yard 2.0. Sneakerheads and E-bay resellers, not necessarily Dover Street Market fans, were prepared to camp overnight—as though outside Supreme or Kith, New York City—in what was once a military camp even when they were told that numbered coupons will be issued so, as a staffer said, “they can all go home”.

We visited the store yesterday, thinking that the craze would have died down and that, being a Monday afternoon (made stifling by the punishing heat), there wouldn’t be a crowd. We were wrong—dead wrong. This was not a clientele we had expected. There was a conspicuous absence of Comme des Garçons (CDG) groupies. Sure, stores such as Dover Street Market has lost much of its snob appeal the moment street wear became part of their merchandise mix and communication vernacular. But we were a little taken aback that many had come as if they were going to Sungei Road’s Thieves’ Market on its last day or to tell us they spent most of their time in void decks. 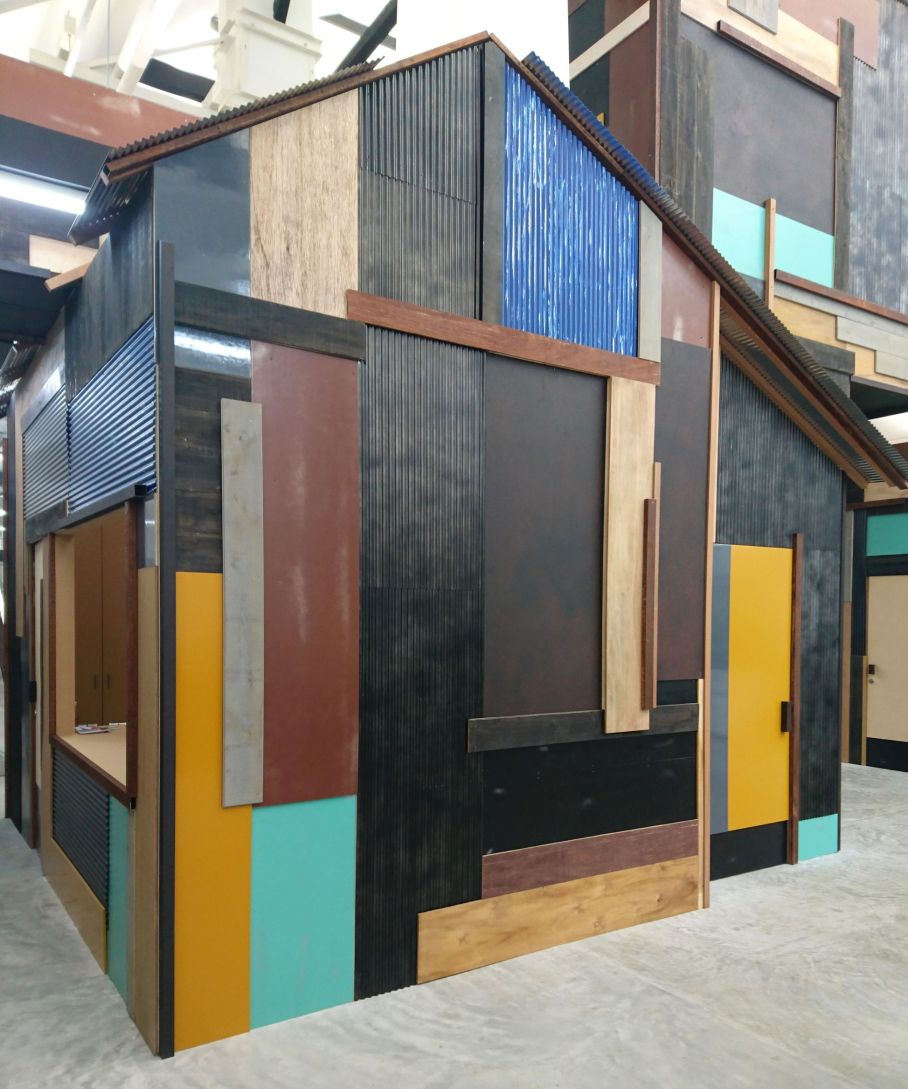 DSMS’s general manager Fiona Tan was overheard telling a bemused customer, “Even this morning, I was bowled over by the amount of people.” Who were they, inquired the interlocutor. “They’re generally young—many in their teens—and they buy brands such as Vetements and they pay in cash.” Are these the usual Club 21 shoppers—his curiosity aroused. “No, they’re not.” Yesterday, a friend of SOTD told us that a staff member, temporarily installed at DSMS from a Club 21 Hilton Shopping Gallery shop (in fact, many familiar Club 21 sales personnel were working in DSMS over the weekend), said, “I’m so excited that there’s a new group of shoppers.” But, according to him, she did not mention that they were, as he saw that very moment, “the T-shirt-shorts-and-flip-flop crowd”.

What did these terminally casual dressers come to this temple of forward style to see?

The Singapore store, like in London and New York, is housed in a historic building, but unlike the latter two, isn’t an edifice and not conceived for grand purpose. This block was part of the former MINDEF and CMPB camp that occupied what was known as Tanglin Barracks. Dempsey has been a military installation since the 1860s when the British bought the 213-acre site from the owner of what was then a nutmeg plantation to build a defence HQ. It is part of three clusters (the other two: Minden and Loewen) of commercial space, and, since the mid-2007, has been a thriving F&B neighborhood.

DSMS’s entry here is a little at odds with the area’s rustic and verdant lure. It is a striking oddball among un-lovely retailers of mostly curios and antiques. This is retail disruption, if you need an example. The building itself is made plain and white, and only distinguished by its thatched roof that gives its interior a ceiling height not seen in the other DSMs. This is the first DSM store in a single storey. The others are spread over several floors (London: five, Tokyo and New York: seven). Its façade, nondescript as the building is architecturally sound, somehow reminds us of a now-defunct, compact, 2-storey Comme des Garçons in Tokyo’s Aoyama district—a stone’s throw from Blue Note Tokyo and no more than a kilometer from the CDG flagship—identified only by an orange door. True to CDG’s scream-not exterior, DSMS’s walls are plain to a fault. Perhaps, therein lies its pull.

The away-from-the-maddening-shopping-crowd location is consistent with DSM’s provenance, and also (once) a regular surprise of CDG locations. When DSM first opened in London’s Mayfair on Dover Street, more noted for heritage hotels, such as Brown’s Hotel—known in the 19th century as a “genteel inn” that was opened by Lord Byron’s valet James Brown—than fashion retail, the store was a standalone that attracted mostly those in the know and fashion editors looking to buy clothes that would score with photographers such as Scott Schuman. Dempsey isn’t quite a hideaway, but it has low-traffic noise and a neo-kampung vibe that is best exemplified in DSM’s signature collage of a ‘hut’ (pictured above), touted to be the tallest among all DSMs. 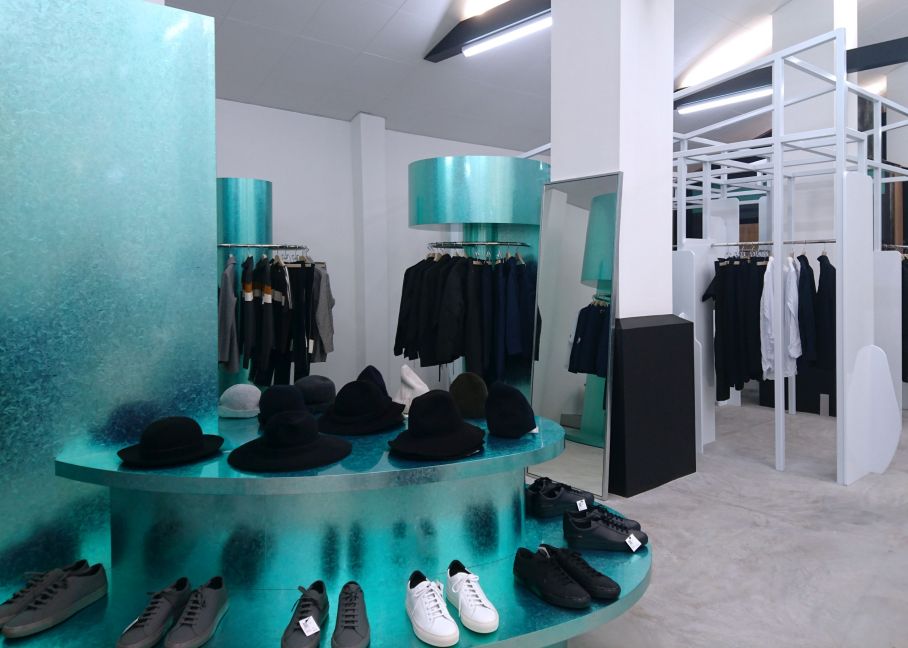 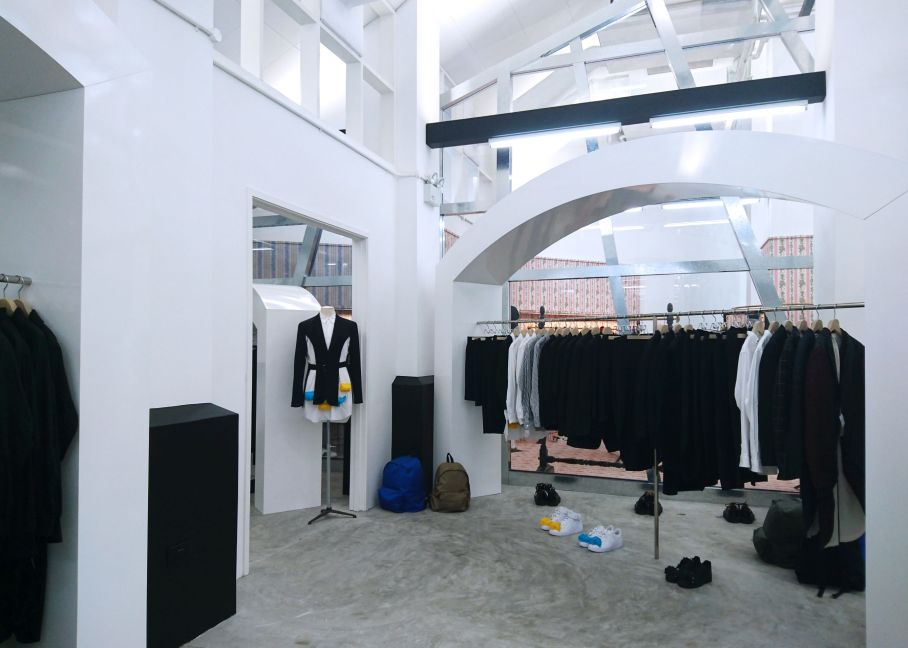 As with all the other DSMs, the interior of the Dempsey store is designed by CDG’s reclusive (or ascetic?) Rei Kawakubo, who had dabbled in furniture design in the mid-’80s (the collectibles now, unsurprisingly, command astronomical prices). She was reported to be on site during the course of the renovation, but had remained unseen, leaving the public-face role to her husband Adrian Joffe. There’s no perceivable methodology in Ms Kawakubo’s scattered design and not-standard fixtures. If she could deconstruct clothes, she certainly could do the same with interiors. These unrelated visual amalgams come together as what Ms Kawakubo famously called “beautiful chaos”, cleverly choreographed and contained in what is akin to a mess hall.

With such a horizontal expanse, we had expected semblance of a maze, as seen in the vertical Ginza store. DSMS is surprisingly rather linear in its layout—the straightness broken by pockets of space put together to reflect the various brands’ own identities. The store guide is, therefore, not identified by floors. Instead it goes by “spaces”. There’s less of an exploratory component here since one does not get to meander into unexpected corners or hidden recesses. It is more like walking in a corridor flanked by rooms.

In the inner-half of DSMS, a fenced-up zone called “Wire Fence Labyrinth”—which is more a menagerie—makes one feels caged in. Perhaps, as one shopper suggested, Ms Kawakubo is more adept at putting together a space stretched across multiple floors. Used to starting the exploration from the top level of DSMs, we found the elongated oblong, while large, quickly comes to the opposite end. DSMS is easily covered in one lap. 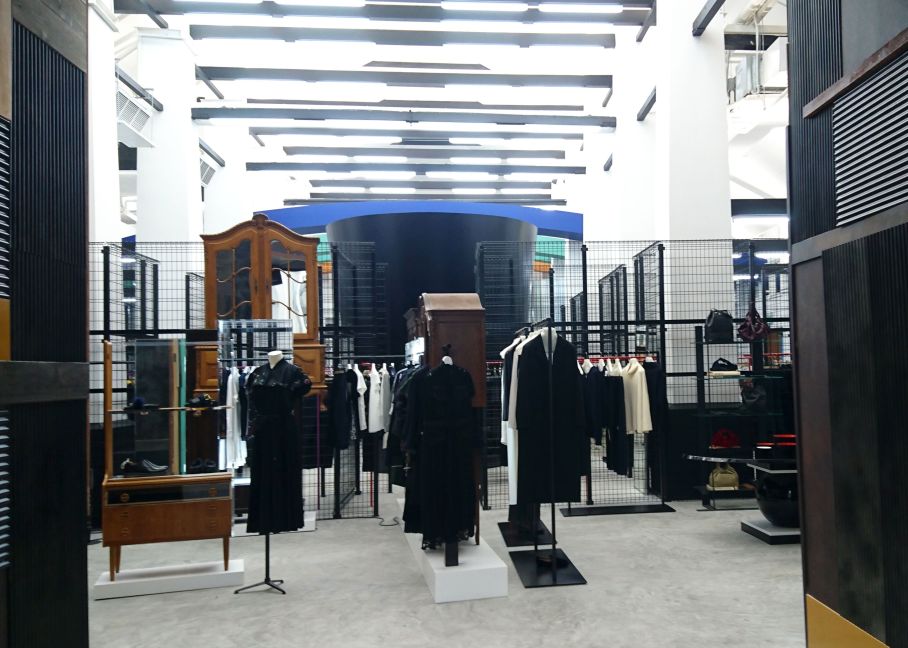 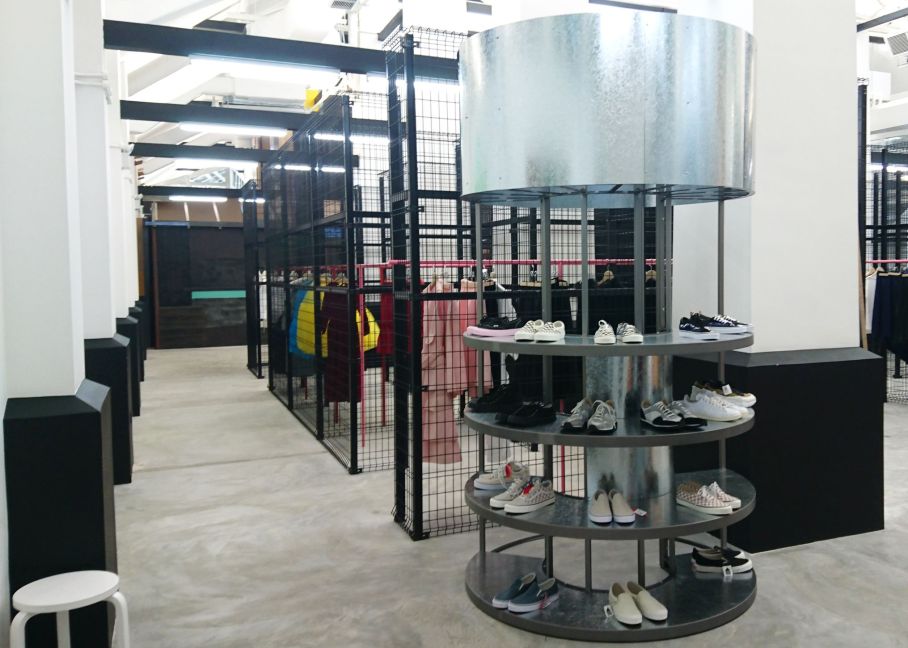 Even more straightforward is the merchandising. DSM has always banked on its flair for assembling products with both emotional and design value. This is a store that easily elicits a response from visitors—rare is the shopper who leaves without a deep impression. For Singapore, that emotional connect seems a little feeble. There is a rather large supply of tees, a product that surely does not raise temperatures in our T-shirt-aplenty city. These are instantly understandable items: no explanation required. Despite its “no planning” claim, DSMS clearly had a game plan. They know from the start who’s going to come and what they’re going to buy. The shoppers this Monday afternoon proved them right.

Sure, sneakerheads and streetwear devotees will be thrilled with the skate/sports offering, but the absence of Supreme and Palace may not move true aficionados. If you’re here for the sneakers, then you’ll be rather surprised by the smallness of the area dedicated to your fave kicks—for now, essentially a corner given to Nikelab, which, incidentally, offers the best value for the softest cotton jersey T-shirts in the store, at S$79 a pop. This lack of immediate visibility for sports shoes is a dramatic contrast to DSM London, where a big chunk of the basement level is dedicated to some of the most desirable trainers that easily rival those of indie retailers such as Footpatrol.

DSMS’s surprising surfeit of T-shirts is, perhaps, a reflection of our fashion-consuming masses than the store’s buying direction. It’s symptomatic of how we only want to dress “comfortably” because it is always too hot for anything more than a tee. Serious fashion folks were naturally not immediately bowled over. Said one product development manager: “the buying seems strangely safe for DSM. They plan to make the most money out of T-shirts?” A retired fashion stylist was not impressed. “The merchandise is similar to Comme,” he lamented, “Same-same, but different. It’s like I am a fan of Miyake’s pleats and there are other labels showing pleats as well.”

To understand the perceived sameness in the merchandising of DSMS, it is necessary to consider that the store is, foremost, a “curated” space and that it is possible that the buyers were aiming at aesthetic cohesion. Or, a similarity that serves to augment CDG’s above-the-common standing. Rei Kawakubo’s vision for DSM is likely the vision she has for CDG and, as such, she tends to be drawn to those labels that traipse the same path as she does. Yet, that may not be entirely the case. If DSM is home to the best of the avant garde, what are Gucci and The Row doing here?

The thing is, CDG, as a group of labels, does not resist the commercial. It never has. If you look at their free-standing stores in Tokyo, from Omotesando to Marunouchi (where there are two), accessible sub-brands such as the wildly successful Play, the distilled-to-the-essence Black, and the pop culture-friendly Edit allow the main brand to achieve mainstream appeal, which, in turn, allow Rei Kawakubo to do the work that, while incomprehensible, gets museums a-calling. Good Design Shop (in Singapore for the first time at DSMS)—a collaboration with Tokyo lifestyle outfit D & Department—is an outlet for CDG to flaunt, well, CDG, the three letters that appear on the clothing and bags produced exclusively for the Shop, all irresistible to those who need to wear brand names on their chest, or back. At DSMS, Gucci and The Row are the saleable names that allow moneyed shoppers’ fast track to fashion credibility.

The talk among industry watchers is that DSMS will change the scene here by injecting hitherto missing excitement into an increasingly bleak retail landscape. This we hear, and read, with a tinge of sadness. Can only foreign businesses rescue us from the doldrums that the selling of fashion has become on our shores? Back inside DSMS, the answer is a yes. Whether you are rejoicing among the shelves and racks of T-shirts or cavorting with CDG’s own mind-boggling clothes, non-native Dover Street Market is a veritable fashion playground. It’s well-lit, fine-looking, and fun to wander through.

2 thoughts on “From Dover Street To Dempsey Road”