People who understand and love Comme des Garçons talk about the “transformative power of the clothing”. On the eve of the Met’s latest spring exhibition The Art of the In-Between, SOTD looks at how CdG, in particular, its designer Rei Kawakubo, has transformed our perception of what can or cannot be clothes and how the unconventional becomes conventional 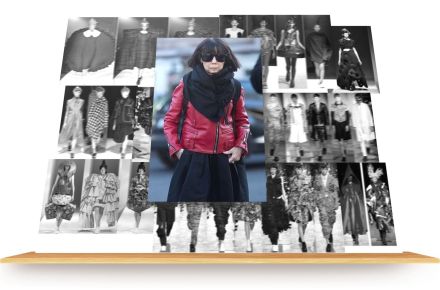 Rei Kawakubo (centre) in Paris. Collage: Just So
People break rules all the time, but few are serial rule breakers. To smash established notions of anything, for some, leads to emancipation. In fashion, liberation from the past era’s, century’s, decade’s, previous generation’s, yesteryear’s idea of what is wearable, can-face-the-day clothes has been effected for as long as garments are made and worn. From Paul Poiret to Coco Chanel to Yves Saint Laurent to Mary Quant to Helmut Lang to Raf Simons to Demna Gvasalia to so many more, fashion codes have been rewritten, and clothing has, in many ways, become the freeing of oneself from the constraints of the markedly contemporaneous.

Comme des Garçons’s Rei Kawakubo is a serial rule breaker. Some designers challenge the zeitgeist long enough to see the desired changes and then revolutionise no more. Ms Kawakubo constantly contorts our view of what can be considered suitable to the body and what can be construed as clothes. As she told WWD in 2012, “The more people that are afraid when they see new creation, the happier I am.” If this fashion outsider’s success—culminating in the Met spring exhibition opening on 4 May in New York City—is any indication, Ms Kawakubo may be rather less happy these days.

Perhaps she is. “It’s a Met show for Comme des Garçons, not a Comme des Garçons show at the Met,” she told the media recently, in the few, possibly reluctant, interviews she granted to market the exhibition. And they detected or deduced that she likely had to compromise, something possibly unheard of in the modus operandi of Rei Kawakubo.

But it wasn’t this way in the beginning. From the start, Ms Kawakubo was really the ready radical, a petite Oriental woman who dared to go to Paris in 1981 to show in the same city as then-newsmakers Thierry Mugler and Claude Montana. But hers wasn’t like the powerfully feminine clothes of her French counterparts; hers were new creations that she likes people to be afraid of, and they were, so much so that the media of that time described what she did disparagingly as “Hiroshima chic”.

She was not the least fazed, and has stuck to showing in Paris till today. Despite the coldness of her designs—mostly in black—people warmed up to them. By the mid-Eighties, CdG, though still odd, funereal, and boyfriend-repelling, appealed to the taste of women for whom ‘power dressing’ encouraged aversion. These were largely those who worked in creative fields, individuals not compelled to dress in the way corporate environments demanded.

Holes in pullovers, tops and shirts with puckered armholes, skirts with unfinished—meaning un-sewn—hemlines that did not accentuate the hips, dresses that could have led a double life as a sack for potatoes, these were novel to a new generation of consumers of designer labels not yet weaned on the elegance of the day. Torn and rough and imperfect, as opposed to refined and smooth and perfect, were visual cues to communicate the message that women were now dressing for themselves rather than for the opposite sex. Visually and obviously feminine styles took a back seat.

The growing success of CdG indicated to other designers—established, emerging and those waiting in the wings—that desirable designs need not follow the footsteps of French couturiers such as Yves Saint Laurent, who, in fact, preceded Ms Kawakubo as the first living designer to be honoured by the Met with a solo exhibition in 1983. Ms Kawakubo was in her third year showing in Paris at that time, and probably did not imagine that, 34 years later, she would share Mr Saint Laurent’s good fortune and be selected by the Met to display 150 pieces, as many as the latter, of her designs for public viewing.

Even Marc Jacobs, who does not deny that he’s inspired by CdG, has worn CdG to the Met Gala—a lace tunic shirt to the 2012 Schiaparelli and Prada: Impossible Conversations. Mr Jacob’s coping of CdG not only makes the label a designer’s label, it also elevated the brands visibility. By now, Comme des Garçons, although not an instantly recognisable name as Louis Vuitton, has become what rivals would call successful. Ms Kawakubo is still considered by her peers to be an iconoclast, but the label that she started in 1969 has gone somewhat mainstream too, with pop stars such as Lady Gaga wearing CdG to the delight rather than bafflement of her fans, and with fast fashion imitating their house codes of mixed fabrics/patterns, asymmetric hemlines, and strange proportions.

CdG was not conceived for the masses. It’s disavowing of conventions set it apart, pulling those who are not seduced by the ordinary to the brand. Yet, it has become a bit of a victim of its uncommon success. To be sure, CdG is, in the end, a business, and the company has to survive, and they did so rather well with commercial “non-fashion” items such as those of the popular Play line. Because Ms Kawakubo makes clothes unlike her contemporaries or creates looks ahead of them, her clothes seem to defy time—they don’t date. Vintage CdG is still so in demand (just look at Tokyo’s Rag Tag) that even the company reprises their past pieces in the ‘Evergreen’ collection.

Stalwart supporters of CdG will continue to embrace Ms Kawakubo’s what-will-she-think-of-next designs. For the uninformed, CdG clothes may not look “designer”, but as John Walters once said, “Only you know you spent money when you wear Rei’s creations.”