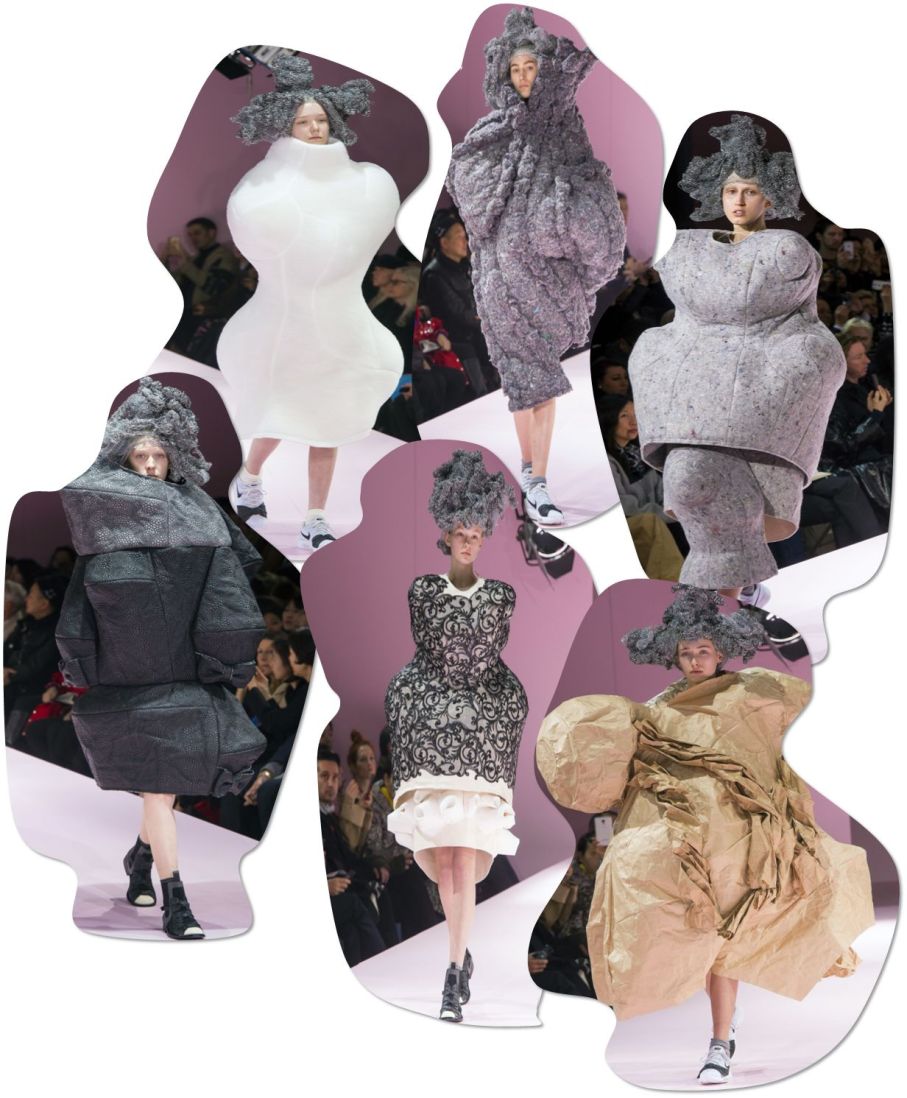 With the Comme des Garçons retrospective, Art of the In-Between, starting the first Monday of May (exactly seven weeks from now), it is not unexpected if you thought that the just-shown CDG autumn/winter 2017 collection was conceived for for a date with New York’s Metropolitan Museum.

According to The Met’s Costume Institute, this year’s aptly-named spring exhibition—traditionally kick-started by the Met Gala, where, as Bret Easton Ellis would have said, “the better you look, the more you see”—“will examine the work of Japanese fashion designer Rei Kawakubo, known for her avant-garde designs and ability to challenge conventional notions of beauty, good taste, and fashionability.”

Ms Kawakubo is, of course, the agitator-designer behind the label Comme des Garçons. While CDG is gaining massive grounds in terms of popularity, Ms Kawakubo has remained largely unknown, a long-term mystery. Until a couple of days back, there were hardly any recent photos of her in the public domain. Few have spoken to her except her staff, and even then, that privilege reportedly goes to only a handful. This enigma no doubt augments the brand’s appeal. That what she has shown on the runway in the past ten years have been largely unpractical and unwearable only ups CDG’s alternative-therefore-desirable cachet and prestige. 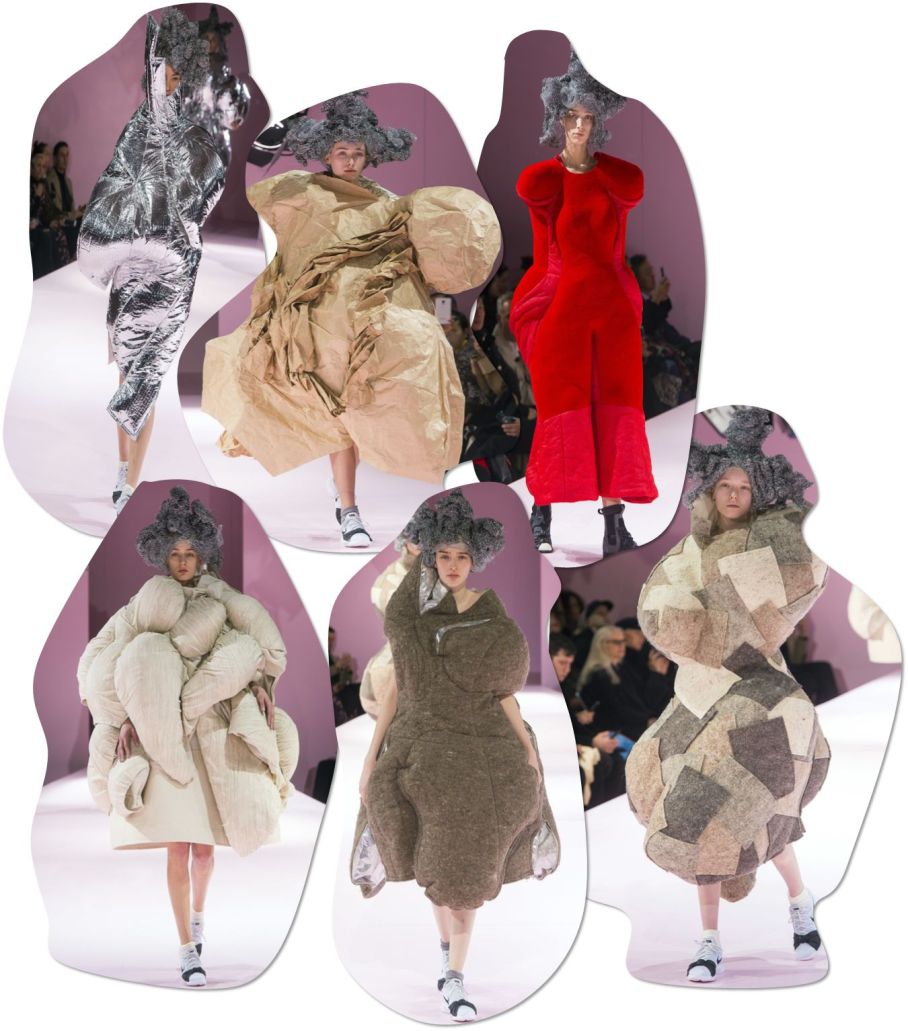 The Future of the Silhouette, her latest collection (and, indeed, not just this one) begs the question: “Are these clothes?” If clothes are what we wear to cover our body, then indeed they are. But if they are items worn to enhance, expose, or beautify the shape of the body, and in doing so, allow the wearer to fit into a society that shares this definition, then CDG may not have offered clothes. And if they are not clothes, what are they? The question is harder to answer when so much of Ms Kawakubo’s output defy the present-day anatomy of what constitutes good-looking garments, with holes for neck, arms, and legs.

Rei Kawakubo once said, “Fashion is something you can attach to yourself, put on, and through that interaction, the meaning of it is born.” Attach? As in pinning a brooch to a blouse, or clipping a carabiner to a belt loop? Put on, as you would with a shoe, an article of clothing that does need to take the shape of the part of the body in which it encases? Ms Kawakubo’s avoidance of the word ‘wear’ possibly refutes the notion that clothing has a functional role as much as proposes the idea that, as attachment, our clothes need not follow the contours of our body. The body is a base on which any shape can be attached to.

And that was what she conveyed at the show many attendees thought would be a prelude to The Med. The first outfit could have been an uncoloured, oversized tennis ball distended to cover the body, arms confined within. A bulbous paste-on of a dress looked like it was made of insulation material. A cocoon of rough and speckled fabric with a face peeping out an opening was akin to a child pretending to be a tree. And the transfigurations did not stop, or the textural anomalies. While others use the likes of sequins for surface decorations, Ms Kawakubo employs what could be suckers of cephalopod limbs.

No form was too impractical, too strange, or too at odds with the body. In the past four seasons, CDG has ceased to show clothes that match any semblance of what all of us have in our wardrobes. Sure, before that, there were her characteristic oddities, but a dress still looked like a dress. Now, they are mutant fabric shapes, as if designed by pre-schoolers for imaginary beings with face, lower arms, hands, lower limbs, and feet like humans but not the rest of their fantastic forms.

These clothes are composites of alien yet organic shapes—conjoined protuberances. Ms Kawakubo has always been partial to bulges and distensions, a love affair that can be traced to the spring/summer 1997 collection called Body Meets Dress, Dress Meets Body, popularly referred to as Lumps and Bulges. While clothes from that season were largely seen as an attempt to exaggerate female curves, her present silhouettes are more than Quasimodo-peculiar. These strange, not immediately recognizable forms are beguiling because no one makes them. And no one knows how they are to be worn.

Other questions abound. How are these clothes made? Are there any paper patterns involved? Are the clothes designed directly on the body? How does one get those shapes to hold? How does it feel inside one of them? These questions are as intriguing as those directed at the clothes’ wearability or the admirers’ sanity are unrelenting. In searching for answers, we sometimes wonder if the construction of these un-clothes-like clothes shares the same base or framework as those worn by individuals playing SpongeBob SquarePants. Fashion really need not only appeal to the heart; it can appeal to the mind too.

The CDG aesthetic is so established and so appreciated by diehard fans that Rei Kawakubo no longer needs to show what to her is mainstream fare. Instead, she uses the main Paris catwalk as focal point to showcase what for others are inconceivable, or, maybe, to parody herself. In doing so, she has again and again vividly illustrated that there is no limit to creativity. To regard her designs, as some do, with the same eye one sees Gucci, or the same benchmark one applies to Chanel is like Impressionist fans disparaging the work of the Cubists. Totally understandable why The Met went a-calling. 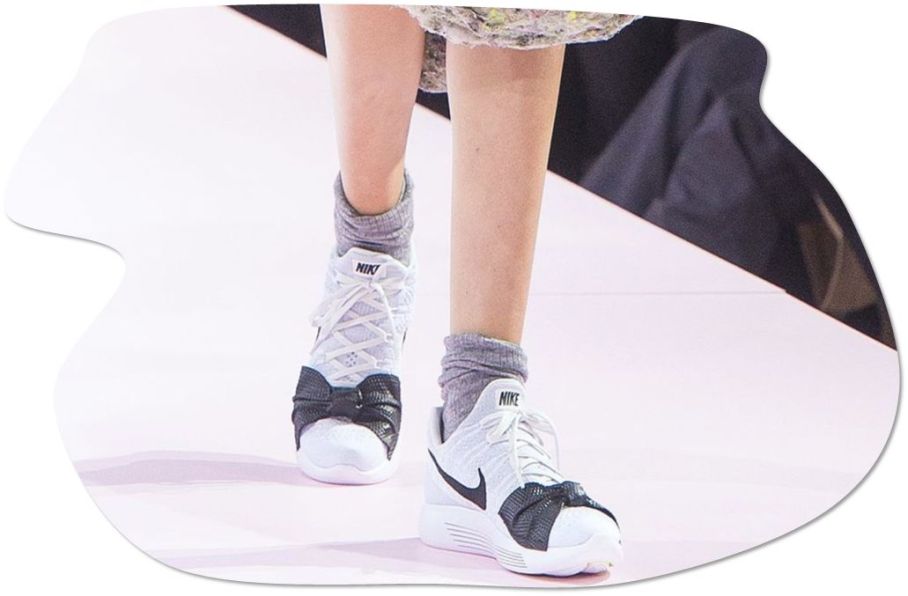 Despite garments that make many wonder who would buy them, Ms Kawakubo still offers something that are wearable and, indeed, covetable: footwear. These rather conventional shoes for autumn/winter 2017 are counterpoint to the way-out, armless blobitecture of what is worn above them. Since none of what she proposes as clothes would look appropriate in heels, Manolo Blahnik or not, Ms Kawakubo has again chosen to collaborate with Nike to birth the oddly feminine Nike Lunar Epic Flyknit (above), a trainer with a bow just above the toe box. Is that not commercial and wearable?

That, for some, is the genius of CDG: leave the wearable stuff to the sub-lines and collaborations. The effectiveness of this strategy cannot be underestimated. CDG has such a distinct aesthetic that it transcends trends. Most CDG garments are so unusual that they either look of the present time or so extraordinary that it has nothing to do with time except the wearer’s own chronological perception of what is current and what is not. Lines such as Comme des Garçons Comme des Garçons, Tricot, and Black carry the CDG torch without even a flicker, and they continue to perform extremely well for the brand.

The main Comme des Garçons collection that enthralls those lucky enough to see it in Paris will thus continue to be creative expressions untethered to design conventions of the day. Rei Kawakubo had said that she is inclined to “make clothes for a woman who is not swayed by what her husband thinks.” Maybe now, that includes a museum where she would go, no matter what runs through her spouse’s head.

6 thoughts on “Does Rei Kawakubo Now Mostly Design For Museums?”