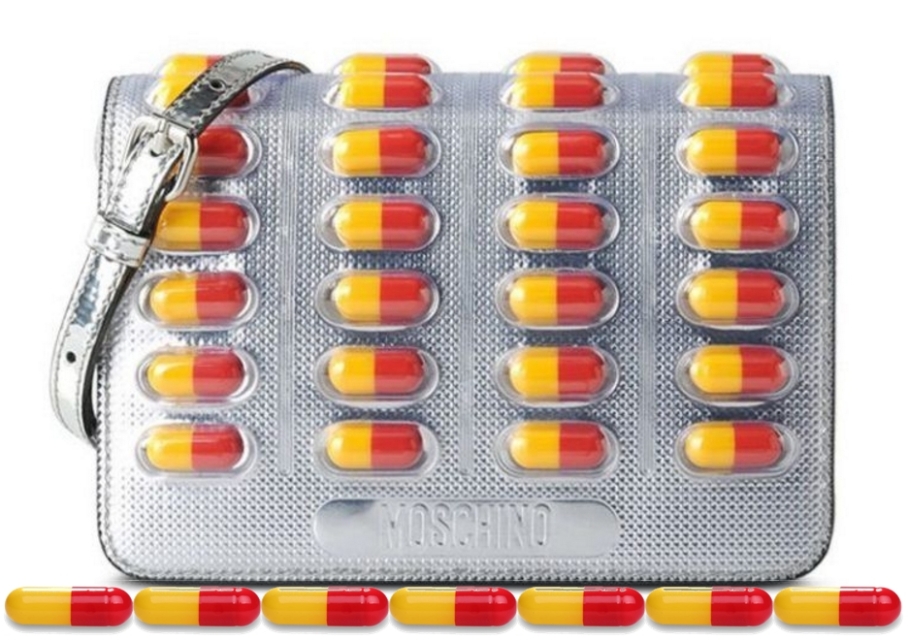 With the controversy it has aroused, we thought Moschino will not be bringing in these bags. But there they were, strikingly displayed in the Paragon store window, the blister pack of pills taking the place of the flap cover of the bag, clearly more noticeable than any strip of capsules at a pharmacy.

Designers such as Moshino’s Jeremy Scott have a predilection for provocation. It’s tempting to say that it’s all in the name of humour and that we should be able to see it for what it is. But what is also discernible is a very real addiction to opioids in epidemic proportion, so much so that there are stores, such as Nordstrom in the US, that have yank the bags and kindred merchandise out of their shelves in the wake of online activism. It isn’t clear what store buyers were thinking when they committed to the purchase of Moschino’s ‘Capsule’ collection.

The use of a capsule as design motif for non-medicinal/medical purpose is, of course, nothing new. But it is, as far as we’re aware, the first time an entire strip of pills is used in such a straightforward and unembroidered way. In airports with extra-tight security, will such a blatant display of love for pills be allowed to pass?

Moschino’s capsule bags and clothing are part of the brand’s spring/summer 2017 collection released as part of the “see-now, buy-now” brand reaction that seized quite a few labels on both sides of the Atlantic two months ago. There’s no negating that the pill bag is a trend item and, as such, has to be released the moment it hit Instagram or Snapchat. In addition, Jeremy Scott has always been a jokester first, then a designer. And you’ve got to let the joke spread fast before it gets stale. Even medicines have a consume-by date.