Lips are in. Rows and columns of them. Redden, scarlet with a hint of sensuality, non-speaking, they’re here. Luscious or not quite full, parted or sealed, they are the symbol of the season (and the next). Lips may suggest sex, but those in the limelight now have little in common with a Monroe pout. They’re Fornasetti’s vermillion zone—emphatic but not quite seductive.

Dior’s current window displays are backed by such lips set against black and white discs, as in Fornasetti’s plates—the roundness accentuating the crimson curves. This repetition of lips, lenticular too, may not arouse carnal thoughts, but there is an erogenous vibe that would never have surfaced if Raf Simons were still the helmsman of the house. What does it mean? A break from the romantic, not sexual, leaning of his past tenure?

A window display once taken down may be forgotten. But the Dior window is a foretaste of things to come. Just last month, in the spring/summer 2017 presentation of Comme des Garçons Homme Plus, Fornasetti prints—those distinctive red lips set within a circle—appeared conspicuously as repeated patterns. This is Rei Kawakubo reprising dots, the shape she loves as much as squares, usually arranged as checkerboard.

Like Yayoi Kusama’s dots, there’s almost no sensuality in the all-over Fornasetti lips, even less on rather unsexy men’s wear. Repetition, it would seem, diminishes the lip’s sensual appeal. Even if the lips are not encircled, such as those on Prada’s pleated skirts from spring/summer 2000, they offer no seductive allure. The skirts are pretty, for sure, but they’re hardly sexy. Prada, of course, does not do sexy and obvious symbols of sexiness are just too banal for the label. Obvious ugliness is often desired, obvious sexiness, no.

However, lips with another brand could be of different service. At Gucci, those on the Mouth Embroidered Leather Pumps pucker for a different reason. The open-toe, T-strap heels, on which an embroidered pair of pink lips outlined in black is placed inches above the toe cleavage, are a calculated composition of elements designed to amplify sexiness. If the wearer has seduction in mind, these Gucci shoes—sexy by virtue of brand history and branding and, therefore, by default—will have something to say. Lifting a foot coddled in this shoe could be an invitation to a kiss!

The use of lips in fashion, whether as detail or pattern, did not usually encourage such raciness. One of the earliest adopters of the lip as a motif on dress was Elsa Schiaparelli. A jacket from the mid-1930s was given lips to frame the opening of the besom pockets. For Schiaparelli, a friend of Salvador Dali, however suggestive a pair of mouth on the waist may be, it really was more an expression of surrealism than sex. 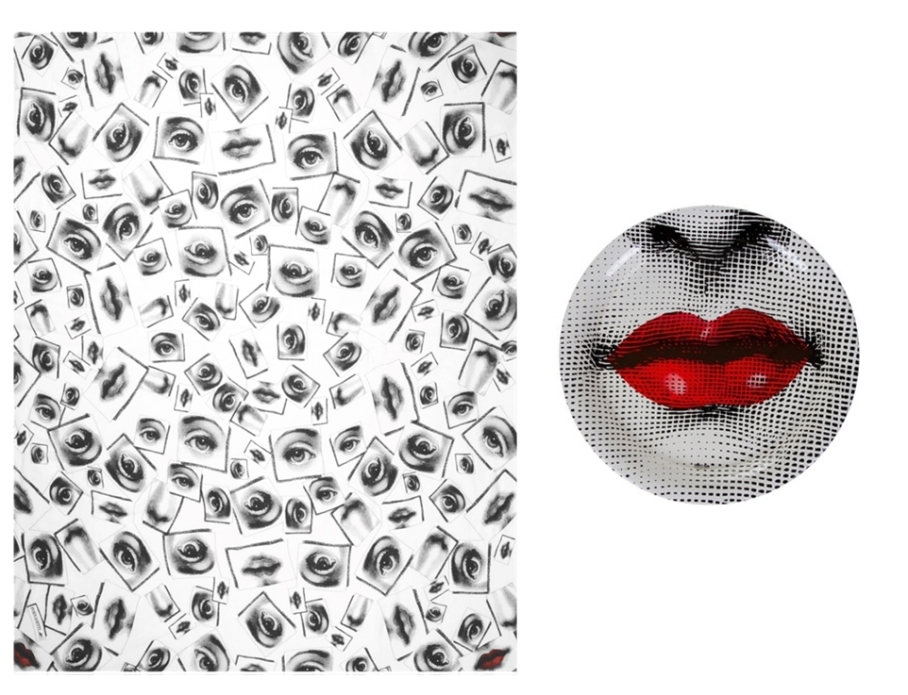 Similarly, while Piero Fornasetti’s famous lips were based on an actual woman’s, they were not drawn as reflection of lustful desire, even if their repeated use bordered on the obsessive. He never even met his subject. Born in 1913, Fornasetti grew up in Milan, but had gone into exile in Switzerland at the start of World War II. It was here that Fornasetti saw the face of Lina Cavalieri—the beautiful Italian soprano who had sung with Enrico Caruso—in a 19th-century French magazine (by then Cavalieri was well into her sixties). It was the visage that launched a thousand plates. When Fornasetti died in 1988, he left behind over 350 iterations of Cavalieri’s by now recognisable face on dinnerware, glasses, paperweights, cushions, chairs, and side tables.

Like Mona Lisa’s beguiling smile, Fornasetti’s drawings of Cavalieri’s lips (not always painted red) do not seem to say anything—they’re not even particularly emotive. Present-day viewers unaware of who the lips belong to may not even tell that from between them, a voice once entranced audiences at the Metropolitan Opera. Whether on a dinner plate or on a Comme des Garçon jacket, they seem to state what The Go-Go’s have said (or sung) in 1981, “Our lips are sealed.” And, unlike Jon Pasche’s logo for the Rolling Stones, no tongues, please!