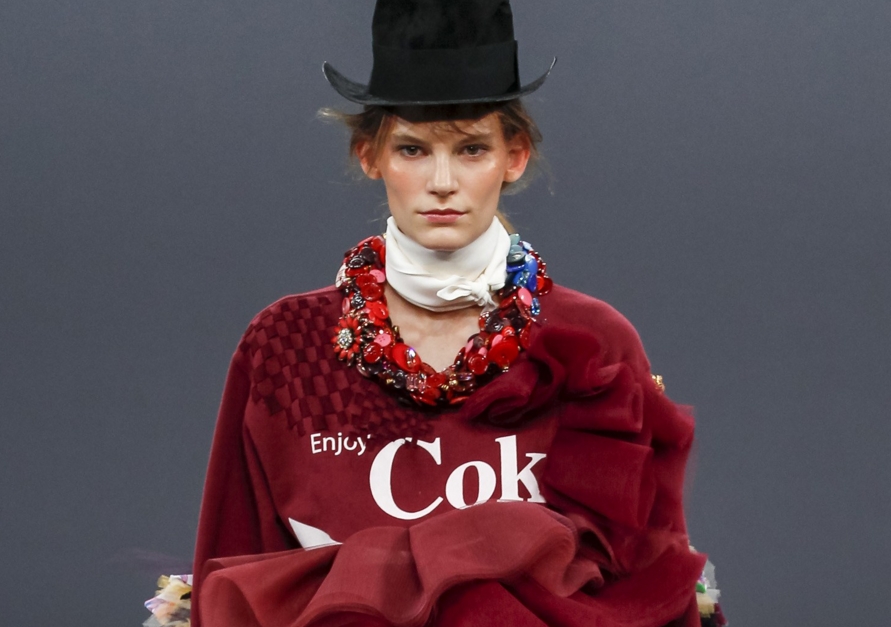 Just as you thought haute couture is where you might seek refuge from the street-style influence that now pervades the outside of this rarefied world of fashion, in slips a soda pop logo among the silk tulle. Viktor & Rolf’s autumn/winter 2016 couture show opened with a rather unexpected article of clothing: a sweat-top emblazoned with the logotype of Coke.

Shock perhaps wasn’t the immediate reaction as surprise did not even register. Nothing in fashion is shocking anymore just as no celebrity misbehaviour today is ever truly scandalous. But a sweatshirt with a recognisable font that you often see in a supermarket or the fridge in a mamak store does suggest that perhaps something was mis-sited—a collection maybe? Did Viktor Horsting and Rolf Snoeren decide to show ready-to-wear instead of couture in a show season dedicated to the latter? It wouldn’t be at all surprising if it was the case. After all, these are confusing times. If the recent Couture Week’s opening act was a prêt-a-porter showing (Vetements!), why can’t there be another of the latter somewhere in the middle of the former?

It is, however, not likely that Viktor and Rolf will miss a couture showing even if their collections have not always been a hit with the press, the way Chanel’s always have. The duo’s shows are usually much anticipated as they are inclined to sending down the catwalk clothes that may be seen as subversive in view of the traditions that haute couture has always tried to protect. Still, the appearance across the chest of a four-letter word that could also mean an illicit drug is unanticipated, even when post-DHL T-shirt craze, commercial branding that has nothing to do with fashion should not raise eyebrows.

Coca Cola, of course, has a special place in fashion. Karl Lagerfeld’s near-obsessive consumption of Diet Coke (reportedly to lose weight) is now legendary. In 2010, he has even designed a limited-edition Diet Coke bottle featuring his full-body silhouette in black. Since then, Coke has collaborated with designers on their bottles up to last year, when J.W.Anderson too got into the act. It’s been 130 years since Coca Cola made its appearance as a flavoured sparkling drink. So, perhaps, Viktor and Rolf’s Coke sweat-top is a tribute of sorts rather than an outright endorsement.

Coca Cola itself is, interestingly, no stranger to clothing production. Back in the September of 1985, when John Parr’s St Elmo’s Fire (Man in Motion) was No. 1 on the Billboard Hot 100 singles chart, the soft drink maker launched an apparel line Coca Cola Clothing together with Murijani Corporation, the producer of denim jeans named after Gloria Vanderbilt, Anderson Cooper’s mother. Ms Vanderbilt is part of a New York family that was once one of the wealthiest in the US. Although she is considered to be the first to create the category called designer jeans, she found success mainly in perfumes.

Coca Cola Clothing of the ’80s featured in a magazine editorial

Murijani Corporation’s collaboration with Coca Cola did not make waves on the fashion front although for a while the rugby shirts with the soft drink’s logo were popular (especially among hip-hop artistes of the early ’90s). Fashion trivia buffs would, however, be interested to know that the early Coca Cola collections were designed by Tommy Hilfiger, who had just left the jeans label Jordache and was about to start his namesake brand, also backed by Murijani Corporation.

The launch of Coca Cola Clothing was a relatively modest affair. As it was the era of MTV, Murijani Corporation backed the production of a “rock/fashion” music video Creatures of Habit to market the line. It was performed by an unknown (even till today) singer called Barbara Hyde and directed by Jeff Abelson, who was behind some of the popular videos of that time, including Ray Parker Jr’s Ghostbusters. Despite the pop platform and a plan for 50 stores around the world called, unbelievably, Fizazz, (as it turned out, only one in Tokyo opened in 1987), Coca Cola Clothing did not take off.

In 2007, they tried again. Now, it’s under “Drink2Wear”, an initiative that attempted to, according to the company, “create value through sustainable fashions”. T-shirts made from a fabric that mixed recycled PET bottles and cotton and featured exhortative text such as “Rehash your Trash” were created. Sales were perhaps encouraging as the line was expanded a year later to include loungewear, caps, and totes. Then that fizzled out.

Millennials would not have heard of clothing by Coca Cola even if they have seen T-shirts ablazoned with the logo in the weekend markets of Bangkok. As if to correct that, Coca Cola made a come-back collection in 2012 in Rio de Janeiro, this time designed by a Brazilian called Thais Rossiter. It banked on the athleisure trend that was slowly but surely showing up in urban fashion. Sadly, it was, as one observer remarked, “a joke”.

Coca Cola should have learnt from Apple’s needless error. In 1986, just as the company’s products were winning a sizeable fan base, it launched The Apple Collection—gaudy Apple-branded clothing, accessories and “lifestyle products” that were supposed to entice fans into buying into what may be considered an early form of the Apple ecosystem. It requires no guessing that no one took a bite of that offering.

Although Coca Cola-branded wear was never wiped out from retail, no one bursting with fashion credibility would touch it. Then the spring/summer season came and a few fashion posts appeared in social media showing women in vintage Coca Cola T-shirts. Was the fizz released because of the trio of Coca Cola dresses shown by Fyodor Golan during London Fashion Week early this year? Or did that yellow, uniform-as-cool-tee started it all? Or perhaps it happened earlier, in 2014, when Moschino’s Jeremy Scott showed that fashion can appropriate commercial symbols to imbue itself with cool when he mischievously riffed on McDonald’s double arches?

Whichever the case, even couture has now caught the bug. Who’d ever thought that Coca Cola would have its day in high fashion today? What will they think of next?

2 thoughts on “Coke Creeps Into Couture”