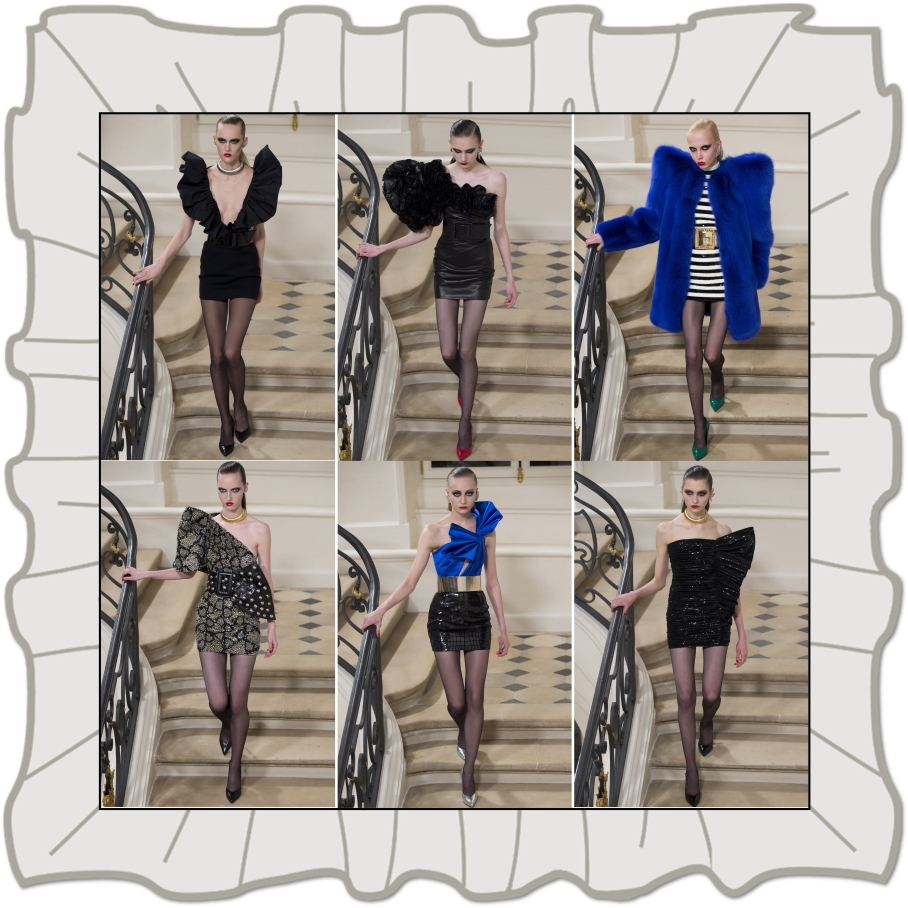 With the second autumn/winter showing of Saint Laurent in Paris two days ago after the co-ed display in LA last month, things are getting a bit confusing. Is there a need for a two-parter in one season? Or is this something else altogether, maybe haute couture? No report can offer a definitive that this is the high fashion collection that design director Hedi Slimane had previously expressed interest in doing. So far it’s been guesses (amid the rumour that this could be his swansong), based on what was on the invitation card, the venue of the show—a 17th Century hôtel particulier now converted into the quarters of Saint Laurent Couture, and its format—sans music with a voice calling out numbers to each of the 42 looks, a throwback to the heyday of haute couture.

The all-dressed-up-with-somewhere-fancy-to-go visual intemperance of the collection suggests that perhaps these are special clothes indeed. They’re all heightened by a vivid luridness and a trash-as-dash sensibility that seemed to be on the side of self-conscious. Could this be a ruse to play down the clothes’ serious couture foundation? Offer the craftsmanship of yore but it must be resplendent of the cheap styling tricks that will amuse an alien-to-self-consciousness audience that will take anything spat at them. Maybe those “cool kids” welcomed as “friends of the house” who would have paillettes as breakfast cereal.

While we have always resisted the clichéd and convenient use of Dynasty for any comparison, we have to succumb and say that these seem like costumes for version 3.0 of the American soap opera if the Carringtons were to be played by the Kardashians. A disco narrative can be discerned too, or, rather, the ’80s looking at a decade earlier as retro. Just as we thought French designers are not influenced by the Paris discotheque Le Palace the way their American counterparts are by Studio 54, Mr Slimane plucks down a mirrored ball and gives it a giddy spin. Not coincidentally, the ’70s was also the glory days of Yves Saint Laurent. DNA, once again, the sure-fire way to connect to people. Mr Slimane proves that he can out-shorten, out-heighten, out-amplify, out-sequin, out-lamé the best of them. 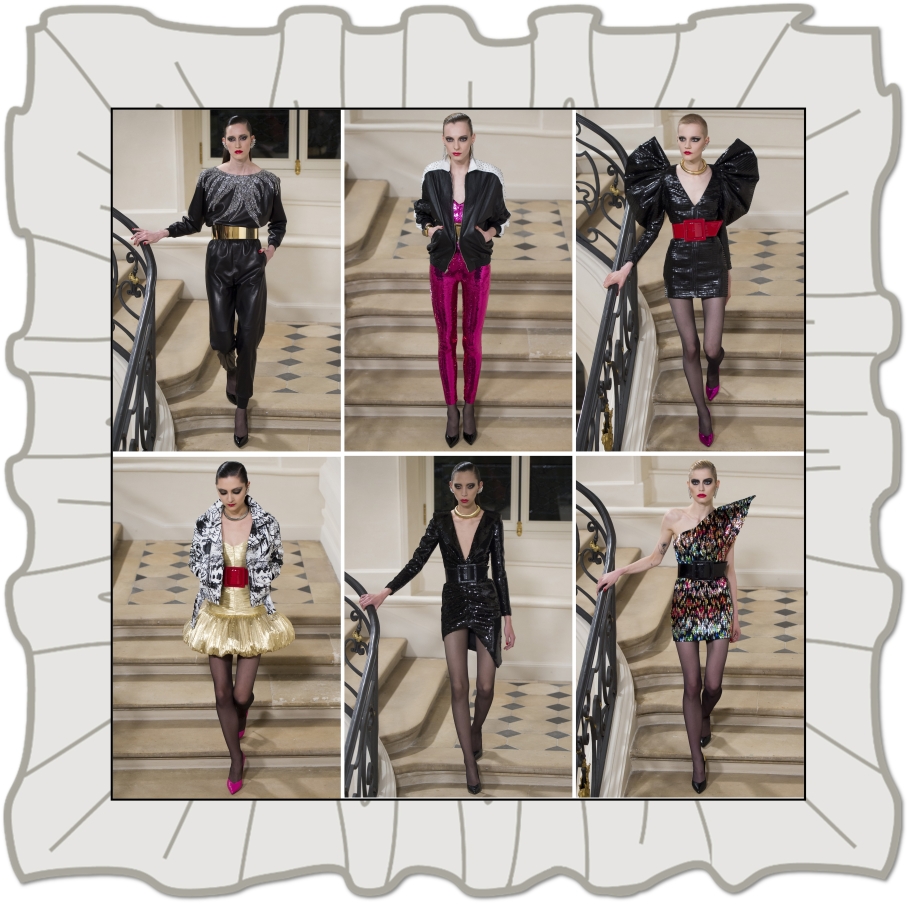 Perhaps this has to do with the Americanisation of Hedi Slimane, a process that could have started when, in 2012, he moved the Saint Laurent design studio to Los Angeles, American capital of flash and flesh. In fact, the 47-year-old Frenchman has lived in LA since 2008 (carving a small name for himself as photographer), giving him a four-year lead time to absorb not just the music of the West Coast that he seems to enjoy and eager to promote, but also its sartorial jumble that for many—particularly those of the East Coast—is at odds with superlative good taste. In fact, much of American fashion now is rather like American politics: high-key, showy, and brash. Mr Slimane seems to have caught the bug.

At the start of his tenure at Saint Laurent, Mr Slimane was a divisive figure. No one seems to remember that now. Suddenly, all that trolling and taunting of the past years are over. Buoyed by the retail success of Saint Laurent, he’s now some kind of fashion saviour. Swiftly, Hedi Slimane is a designer who can do no wrong, who; according to a psycophantic Vogue.com, “instinctively gets what girls, young and not-so-young, want”. Is that saying Saint Laurent is commercial? Surely that is stating the obvious, but what could be stated is that the fashion-consuming base anywhere in the world is larger than it’s ever been. The mind, however, boggles: who’d be desirous of these supposedly couture clothes? If you’re not living alone, would you not be inviting censorious questioning, when leaving your home: “Where are you going, dressed like that?” What would the taxi driver think as he catches you from afar flagging down his cab down?

The collection goes by the description La Collection de Paris, but it could have been The Hooker Who Made It (Rue Saint-Denis Mix). Camp and kitsch share as much body space as fur and sequins. Shoulders peak like an exaggerated shrug. Waists held in with belts so tight and wide, they could easy be buckled bandages. Skirt lengths rise up to where underpants would normally end. There’s a strange obsession with the one-sleeve: one of them long with a stiff, wavy flounce running the entire length of the arm like the vertebrate plates of the stegosaurus. Could Mr Slimane have been consuming some psychoactive plants in the studio during the design process? If you look at the “dairies” at hedislimane.com, you would perhaps understand the designer’s aesthetic obsessions.

These garish get-ups will no doubt appeal to the young, such as those that appear regularly on Mr Slimane’s own website—youths completely unconcerned with what others think of them.  How much of it then is alluring to women of a certain age and stature, such as show attendees, YSL muse Betty Catroux and ardent supporter Catherine Deneuve, both who have lived through the original designer’s best years? Is there anything either could be seen in at a Saint Laurent fashion show without looking like the show itself? Is there anything they can wear on the street without being harassed, even only visually?

For a very long time, fashion is no longer categorised into day wear, evening wear, casual wear, work wear, (we don’t even think the last exists anymore since women do don shorts to the office). In addition, consumers are re-coding what is considered elegant and chic, two words hardly ever used in describing the well-dressed. These days, you “rock the look”, and you’re fashionable when you’re “edgy and provocative”, and definitely more so if you look “hot”. It would seem, therefore, that Mr Slimane is voicing the visceral feelings of those who fervently consume his attention-grabbing garb.

Let’s not forget the fixation with ugliness, the opposite of beauty that has been worked into the modern sense of what is fine-looking, first by Muccia Prada with her off-beat prints and quirky styling (“Ugly is attractive, ugly is exciting. Maybe because it is newer,” she had pronounced), then by confessional labels such as I Love Ugly with their cheeky rifts on traditional men’s wear. Mr Slimane is an agitator who clearly enjoys sticking the unlovely in your face, and in doing so, spawn a profitable, persistent following. Perhaps Pablo Picasso was right after all:  “The chief enemy of creativity is ‘good’ taste.”